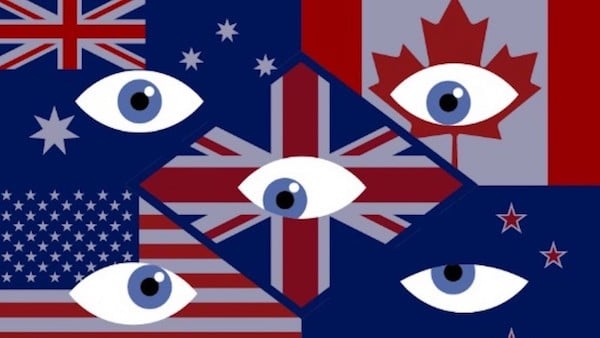 Far from enhancing Canadian security, CSIS and the Five Eyes alliance are enmeshing this country in a campaign of disinformation and propaganda regarding China reminiscent of the McCarthy era, writes John Price. Illustration courtesy RS Kingdom.

Part three in an eight part series investigating the crisis in Canada-China relations.

Amid the wreckage of wars in Iraq and Afghanistan, the United States and its allies have turned their sights on China. University of Victoria professor emeritus and historian John Price examines the rise of the coalition of Anglo settler colonial states of Canada, the United Kingdom, the U.S., Australia, and New Zealand, and how they are today fomenting conflict in the Asia Pacific. You can read the series in its entirety here.

“I felt very alone during the case. No one was on my side except my lawyers,” stated Qing Quentin Huang, after the Ontario Superior Court recently stayed charges that he had illegally spied for China.

Huang worked for Lloyd’s Register, a subcontractor to Irving Shipbuilding, when he was arrested in 2013 and charged with stealing secrets regarding Canadian shipbuilding and marine strategy and offering them to the Chinese government. He pleaded not guilty to all charges. When the Canadian Security Intelligence Service (CSIS) refused to release full transcripts of wiretaps used against him after eight years, the court stayed the charges.

Then there is the case of Dr. Xiangguo Qiu and her husband, Keding Cheng, who were dismissed from the National Microbiology Lab in July 2019 after CSIS reported they represented a security threat. Qiu is an award-winning scientist who co-discovered ZMapp, an effective treatment for the Ebola virus. Two scientists who worked with Qiu at the Winnipeg lab continue to vouch for her integrity yet the government continues to stonewall, refusing to release the evidence against Qiu and her husband, supposedly on national security grounds.

And the list goes on. Canadian authorities recently charged a Montreal engineer with breach of trust for allegedly helping a Chinese aerospace company negotiate an agreement for a satellite station facility in Iceland. In mid-December, federal authorities charged Yantai Gan, a member of the Royal Society of Canada, with fraud and breach of trust for ties with a Chinese university. He has pleaded not guilty to all charges.

The targeting of Chinese Canadian scientists has accompanied the rising influence of Canada’s spy agencies: CSIS, responsible for analysis and operations, and the Communications Security Establishment (CSE), responsible for information collection. They are deeply integrated with the spy agencies of the “Five Eyes” alliance, comprised of the United States, the United Kingdom, Australia, New Zealand, and Canada.

Retired Canadian Brigadier-General James Cox described the Five Eyes as having an “affinity strengthened by their common Anglo-Saxon culture,” pointing to the settler colonial roots of this sophisticated, global spy network led by the United States.1

Not long ago, New Zealand Foreign Minister Nanaia Mahuta declared: “We are uncomfortable with expanding the remit of the Five Eyes. We would much rather prefer to look for multilateral opportunities to express our interests.” Her statement came after it became apparent that the spy network was aspiring to play a coordinating role in policies regarding China. Mahuta reiterated her concerns a week later: “The Five Eyes arrangement is about a security and intelligence framework. It’s not necessary, all the time on every issue, to invoke Five Eyes as your first port of call in terms of creating a coalition of support around particular issues in the human rights space.” The Canadian government, however, has ignored such warnings. Instead, it has moved to strengthen CSIS, allowing it to engage in widespread racial profiling, reinforcing Sinophobia as part of its anti-China campaign.

A recent Public Policy Forum report indicates that the COVID-19 pandemic created “a pivotal moment” for CSIS, which now declares, “Spies are no longer wearing trench coats, they’re wearing lab coats.”2 The agency has created new programs including “Academic Outreach and Stakeholder Engagement” and taken to social media, establishing YouTube channels and offering support against certain cyber crimes, all the while spreading fear of “foreign actors”—a term that apparently does not include the United States.

So far neither local faculty associations nor the Canadian Association of University Teachers (CAUT) appear to have taken up the issue of racial profiling of Chinese Canadian researchers. CAUT has in the past flagged the issue of Islamophobia and called RCMP and CSIS activities on campus a “threat to academic freedom.” Perhaps it is time for faculty associations to consider the problem of Sinophobia and racial profiling and the threat the Five Eyes, as a global settler colonial network, presents to academic freedom.

The ‘Five Eyes’ and misinformation

Given a huge boost with the U.S. inspired “War on Terror” after 9/11, the Five Eyes have taken on aggressive new profiles with the onset of the COVID-19 pandemic. This includes coordinating political statements on the part of the Five Eyes as it did recently in the case of the Hong Kong elections. Beyond coordinating the anti-China campaign, hacking, and the illegal monitoring of telecommunications, the heart of the issue is how built-in biases of U.S. agencies can influence its allies and contribute to “fake news.”

Nowhere was this more evident than in 2003, when the recently deceased Colin Powell stood up in front of the UN Security Council to justify the invasion of Iraq based on falsified U.S./UK intelligence attesting that the regime of Saddam Hussein had weapons of mass destruction (WMDs). That intelligence was produced by the Five Eyes, with the support of CSIS/CSE.

Former Canadian security official, Alan Barnes, recently revealed that in 2003, “CSIS analysis of Iraq’s WMDs tended to support the claims coming from Washington. This is likely a reflection of the discomfort of CSIS managers and analysts at being out of step with the U.S. intelligence community on a critical issue which might compromise their close operational links.”3 Advisors to then Prime Minister Jean Chrétien ignored the biased CSIS reports and advised Chrétien not to join George W. Bush, Tony Blair, and John Howard in their “coalition of the willing” to invade Iraq.

Under pressure from the largest demonstrations in Canadian history opposing the 2003 invasion and the refusal of the UN to sanction military action, Chrétien followed his advisors’ advice to the great disgust of Bush and Blair. One can’t help speculating whether this experience has contributed to Chrétien’s continued insistence that the Canadian government should have ignored the U.S. extradition request and released Meng Wanzhou to Chinese custody in exchange for Michael Kovrig and Michael Spavor.

The election of a minority Conservative government under Stephen Harper in 2006, however, marked the beginning of greater support for the War on Terror and for strengthening Canada’s spy agencies. This soon generated noxious tracts such as the Nest of Spies, written by a journalist and former CSIS officer, that made one of the earliest false accusations that Chinese Canadians were acting as “agents of the Chinese government.”4 This was followed by the head of CSIS from 2009 to 2013, Richard Fadden, declaring that some elected municipal and provincial politicians were under the influence of “foreign governments,” by which he meant China. These suggestions that Chinese Canadians were “fifth columns” operating within Canada correlate closely with the racist campaigns accusing Japanese Canadians of being agents of imperial Japan prior to the Second World War.

Stephen Harper subsequently appointed Fadden as his national security and intelligence advisor in 2015. In the wake of a violent incident in Canada in 2014, the state’s powers of encroachment increased with the passing of Canada’s Bill C-51.5 The strengthening of CSIS/CSE and its involvement in the Five Eyes amplified Islamophobia with serious repercussions, including:

Too often today, mainstream media picks up CSIS reports and repeats them uncritically, relegating their misdeeds and crimes to the past. Australian researchers have noted how the enduring role of the Five Eyes “is overlooked in media coverage, as well as in the research fields of international relations, surveillance studies, and media, communications and journalism.”7 This certainly holds true in Canada where conservatives, much of the mainstream media, and even progressive policy advocates too often accept a ‘national security’ discourse that normalizes the roles of Canada’s spy agencies and their global connections with other settler colonial states.8 Such a discourse contributes to the politics of fear, feeds white nationalism, and reinforces support for settler colonialism globally.

Unfortunately, the Trudeau government also embraced the politics of fear, enhancing the role of CSIS, leading it to run afoul of its own mandate during the 2019 federal elections. According to the BBC, the Five Eyes has expanded globally and is actively and publicly intervening in politics: “In May 2020 the [Five Eyes] alliance agreed to expand its role away from just security and intelligence to a more public stance on respect for human rights and democracy.” Precisely then, CSIS and the CSE issued a joint statement in May 2020 citing an “elevated risk” to the cybersecurity of Canadian health organizations from “an increased risk of foreign interference and espionage.” The two organizations concluded their statement, noting “that the Government of Canada has a strong and valuable relationship with its Five Eyes alliance partners. We regularly share information with our partners, including the U.S., which has a significant impact on protecting our respective countries’ safety and security.”

Far from enhancing Canadian security, CSIS and the Five Eyes are enmeshing this country in a campaign of disinformation and propaganda regarding China reminiscent of the McCarthy era in the United States when government agencies went on a witch hunt against anyone who dissented from official foreign policy.

No one should be left alone, as was Qing Quentin Huang, to take on this formidable arm of settler colonialism.

John Price is professor emeritus at the University of Victoria, author of Orienting Canada, and a member of the Advisory Board of the newly formed Canada-China Focus, a project of the Canadian Foreign Policy Institute and the Centre for Global Studies (University of Victoria).