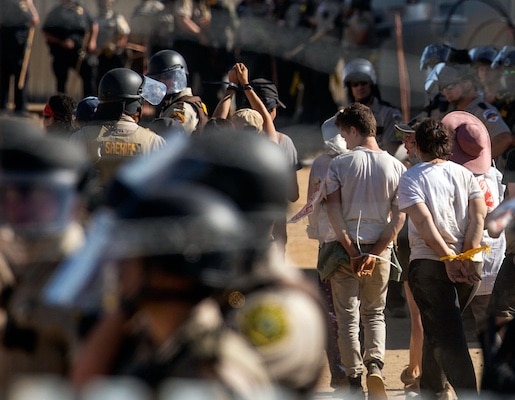 Activists are escorted out of an Enbridge Line 3 pump station after being arrested near Park Rapids, Minn., on June 7, 2021. (Photo: Evan Frost/Minnesota Public Radio/AP)

MONTHS AFTER THE pipeline company Enbridge announced it had finished its Line 3 pipeline, hundreds of the project’s opponents have pending court cases for arrests made at protests during last year’s construction.

Defense attorneys for the water protectors, as the members of the Indigenous-led anti-pipeline movement are known, said many of the charges are overly aggressive and should be dismissed. Defense attorneys pointed to examples like felony theft charges for protesters who chained themselves to equipment and felony aiding attempted suicide for those who crawled into sections of nonfunctional pipe.

“These felony theft charges started coming out during the summer and it’s very clearly an abuse of the prosecutorial charging function,” said Joshua Preston, a lawyer for the water protectors.

It’s meant to send a message saying, ‘If you come to this property and chain yourself to something, we’re going to throw the book at you.’

The criminal trials are the coda to a yearslong fight over the pipeline in Minnesota between water protectors, on the one hand, and the pipeline company and police on the other. Tensions flared, with Minnesota community members pitted against each other–partly owing to what pipeline opponents said was a “corporate counterinsurgency” against their movement, a set of military-style tactics barred by the oil company’s permit.

In addition to the aggressive legal tactics, new questions are being raised this week about the relationship between prosecutors in Minnesota, where the opposition was concentrated, and the pipeline company. Documents published this week by the Partnership for Civil Justice Fund’s Center for Protest Law and Litigation, which is representing pipeline opponents, show that Frieden sought reimbursement from an Enbridge-funded state escrow account to pursue charges against the corporation’s opponents. The requests were denied.

According to the documents, Frieden attempted to bill $12,207.14 to a special account set up by the state of Minnesota to allow Enbridge to pay for law enforcement and public safety expenses affiliated with pipeline construction. Frieden was asking Enbridge to pay for the labor of Assistant County Attorney Anna Emmerling and three support staff for processing approximately 400 cases associated with construction of the Enbridge Line 3 pipeline.

“Hours are due to multiple arrests/citations/complaints and prosecution for public safety related costs for maintaining the peace in and around the construction site,” the county attorney stated in his invoice.

He also asked the Minnesota state official hired to approve or deny Enbridge account invoices if he would extend the period of time covered by the account. “I would like to speak with you over the phone regarding the 180 day time limit following completion of the project,” Frieden wrote in an email that the Center for Protest Law and Litigation obtained through a public records request.

I’m wondering if that might be changed in the future given the significant amount of resources my office will be expending over the next 6 months in the prosecution of criminal acts associated with Line 3.

Prosecution expenses are not an allowable reimbursable expense for the Line 3 Public Safety Escrow Account.

Frieden appeared to respond with frustration. “I look forward to hearing why the multiple late nights and overtime hours by my staff to charge the individuals endangering the public don’t qualify under public safety. I assume the cost to arrest them is covered, just not to prosecute them? How does that make sense under the language you provided below?”

DESPITE THE DENIAL, the requests for reimbursement themselves suggest that a county attorney in charge of prosecuting hundreds of protest-related cases assumed Enbridge would be covering its costs–a fact that defense attorneys said could have legal significance.

“The fact that the prosecutor brought these charges believing the prosecutions were going to be funded by the Enbridge corporation and oil money raises real issues as to the due process rights of defendants,” said Mara Verheyden-Hilliard, director of the Center for Protest Law and Litigation and an attorney representing opponents of the pipeline.

Frieden denied any bias against pipeline opponents. “The idea that we as a prosecution or a county prosecuted criminal law because we thought we would just not ever have to pay money is not accurate. We attempted to return some taxpayer money,” he said. When the request was denied, the county moved forward with the felony theft cases, he added:

We are still prosecuting all the cases so any idea that we were prosecuting based on getting paid by Enbridge is not true.

An Enbridge spokesperson said the company leaves policing and prosecutions up to local officials. “Community police and sheriff deputies are responsible for public safety. Officers decide when protestors are breaking the law–or putting themselves and others in danger,” said Juli Kellner.

We support efforts to hold protesters accountable for their actions.

The dates covered by the invoice coincide with a period of aggressive law enforcement responses to protests against the pipeline. On June 7, more than 100 people were arrested in Hubbard County while attempting to halt pipeline construction through civil disobedience. During the protest, a U.S. Customs and Border Protection helicopter kicked up a cloud of debris as it swooped low in an apparent attempt to disperse protesters. Among the indictments brought by prosecutors was trespass on a critical public service facility, a charge defense attorneys said should not apply since the pipeline was not operating.

Preston, the lawyer for the water protectors, called Hubbard County “ground zero” for arrests and prosecutions–with more than 300 cases still pending. Preston said the prosecutorial strategy was to send a message:

You get a few people who get felony theft charges and they have five to ten years hanging over their head potentially, that’s going to deter other people.

Later in June, Hubbard County sheriffs blocked access to a small strip of county land between a public road and the driveway leading to land owned and occupied by pipeline opponents, claiming it was county property. Prosecutors filed dozens of misdemeanor charges against people who entered the driveway for driving on what they labeled a trail.

And on July 2, three women were charged with felony theft after locking themselves to the gate at a pipeline site in Hubbard County.

The Hubbard County attorney ultimately dropped the driveway cases, while some of the felony theft charges have been dismissed. “In Hubbard County, at least, there have already been two instances where the judge has dismissed, for lack of probable cause, two felony theft cases,” said Preston.

The rationale being it’s effectively a misapplication of the statute, it doesn’t constitute a ‘taking.’

Activists have been petitioning Minnesota Attorney General Keith Ellison to drop all the charges. Ellison signaled a reluctance to intervene in these cases. “My office has not brought any charges against Line 3 protesters,” he tweeted. “Only the county or city attorneys who have brought criminal charges have the power to drop them.” Anti-pipeline organizers argue that Ellison could file an amicus brief in favor of lesser charges or outright dismissal without intervening directly. The petition now has over 78,000 signatures.

Defense lawyers are eager to see some kind of intervention. As Preston put it,

If the state can get away with this overcharging without repercussions, they’re going to do it elsewhere.

Tara Houska, an Ojibwe water protector, is among those facing charges in Hubbard County. “I’m facing multiple gross misdemeanor trespass charges, which as an Ojibwe person in Ojibwe territory is appalling,” she said.

We are protecting the drinking water of millions of people. We are not criminals.