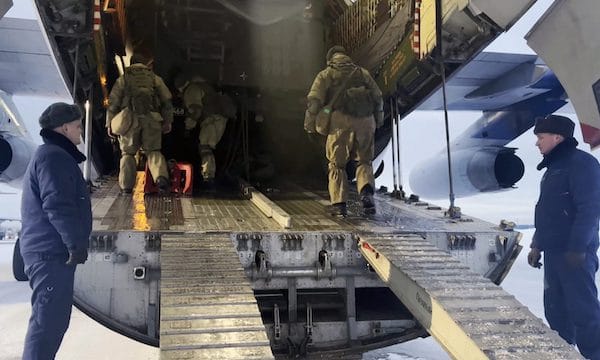 Russian airborne troop units who departed on Jan. 6 to join the Collective Security Treaty Organisation’s peacekeeping force in Kazakhstan are expected to return in the coming days after successful completion of mission.

This must be a rare page in American diplomatic history that a U.S. Secretary of State has been literally off his rocker. Antony Blinken’s outbursts on the events in Kazakhstan were not only boorish but also illogical.

Blinken questioned the decision by the president of Kazakhstan Kassym-Jomart Kemelevich Tokayev to request help from the Collective Security Treaty Organisation (CSTO) to deploy forces to help stabilise the grave situation in his country. He said it was unclear why the deployment was happening!

Moscow had emphasised right at the outset that the CSTO deployment would be temporary. Nonetheless, Blinken sniped that “one lesson of recent history is that once Russians are in your house, it’s sometimes very difficult to get them to leave”.

When Americans are in your house, it can be difficult to stay alive, and not to be robbed or raped. Indians of the North American continent, Koreans, Vietnamese, Iraqis, Panamanians, Yugoslavs, Libyans, Syrians and many other unfortunate people who are unlucky enough to see these uninvited guests in their ‘home’ will have much to say about this.

On Tuesday, Tokayev announced that the CSTO contingent of troops would begin leaving the troubled Central Asian country in two days, with the pullout to be completed in 10 days’ time! Kremlin responded that it is entirely the prerogative of the Kazakh government to decide on such matters concerning national security!

Blinken would know that following the murder of the Iranian general Soleimani in a U.S. drone strike in Baghdad two years ago, Iraqi parliament had demanded the forthwith departure of all American troops. But the Americans are yet to pay heed to it!

Yet, Blinken is an intelligent man. All things taken into account, he deliberately indulged in an act of dissimulation by uttering some nonsensical things: Blinken was actually scrambling to cover up the tracks of the attempt at regime change in Kazakhstan masterminded by the CIA with the approval of President Biden.

Isn’t that a familiar ploy for crafty minds—distract attention from the core issue by raising dust in the air? In this miserable case, the failed attempt by the Biden administration at regime change in a strategically located remote country sandwiched between Russia and China (which is manifold more strategic than Ukraine ever can be) exposes American diplomacy to ridicule in a vast region of Inner Asia. And it forecloses any best-laid plans by NATO to cross the Caspian ever.

Worst of all, the U.S.’ Indo-Pacific strategy will now have a huge arc of geography to the west of China, which is impossible to barricade following such a massive depletion of American influence. Russia achieved all this at minimal cost—a five-day military mission to Kazakhstan.

The Kremlin is reticent about disclosing everything it knows, but from available details, what took place was a failed attempt at colour revolution while “destructive internal and external forces took advantage of the situation,” as President Vladimir Putin put it.

The Russian Ambassador to the U.S., Anatoly Antonov has written more explicitly on the Russian embassy’s webpage that thousands of jihadists were involved in efforts to wreak havoc in Kazakhstan.

Kazakhstan came under attack by radicals who preached misanthropic ideology. Thousands of jihadists and looters made an attempt to shatter the constitutional order… This is a new attempt at a colour revolution with the help of gunmen and looters.

In another interview to Newsweek, Antonov added,

There is serious concern over further spread of radical religious ideology in Central Asia. It comes from the destabilisation in the Middle East and Afghanistan caused, in turn, by the Western military interferences under the pretext of defending human rights and democracy.

The Kazakh foreign ministry said in a statement on Monday that the country “has been subjected to armed aggression by well-coordinated terrorist groups trained abroad. According to preliminary data, the attackers include individuals who have military combat zone experience in the ranks of radical Islamist groups.”

Tokayev himself spoke about a “well-organised and well-prepared act of aggression against Kazakhstan with the participation of foreign fighters mainly from Central Asian countries, including Afghanistan. There were also fighters from the Middle East. The idea was to form a zone of controlled chaos on our territory with the subsequent seizure of power.”

Putin has drawn a parallel with the regime change in Ukraine in 2014, sponsored by the U.S. where agents provocateurs demoralised the security forces forcing President Vikor Yanukovich to flee and into the resultant vacuum, U.S. diplomats promptly inserted a puppet regime unfriendly toward Moscow.

Foreign militants participated in the riots in Kazakhstan, Tokayev said in a talk with European Council President Charles Michel held via a video conference on Monday. “I have no doubts that this was a terror attack,” Tokayev was quoted as saying.

“This was a well-organized and prepared act of aggression against Kazakhstan with the participation of foreign gunmen mostly from Central Asian countries, including Afghanistan. There were also militants from the Middle East,” Tokayev said. “Their intent was to create a zone of controlled chaos on our territory with the subsequent seizure of power,” he added.

Indeed, sixteen security personnel were killed, over 1,300 suffered injuries and about 500 police cars were burned. There were targeted attacks simultaneously on government buildings in many cities.

Conspiracy theories are galore. The involvement of Turkey and Israel has figured. Kazakhstan has closed 5 out of its seven border crossings with Kyrgyzstan. The talk of the town is that western intelligence transferred battle-hardened Islamist fighters from Syria to Kyrgyzstan to infiltrate the porous border into Kazakh territory.

Bishkek feels so ashamed and guilty that President Sadyr Japarov didn’t show his face at the CSTO leaders’ videoconference two days ago and instead deputed his prime minister!

More details will surely emerge. It’s known that the few thousands detainees held by Kazakh authorities include foreign nationals. An estimated 16000 NGOs are operating in Kazakhstan and many are known to be funded by U.S. organisations such as Washington-based National Endowment for Democracy, which funds regime change projects in ex-Soviet republics.

The U.S. has networked extensively with ethnic Kazakh nationalists, pro-Western groups and youth. The “New Kazakh”, educated in America, is a different breed altogether from the “Russified” generation of the Soviet era.

Kazakhstan is a coveted trophy for Cold Warriors. It borders Xinjiang and is the transportation hub for Beijing’s west-bound BRI projects. China has huge stakes in trade, investment, energy cooperation with Kazakhstan.

For Moscow too, the stability of Kazakhstan is of vital concern as 3.5 million ethnic Russians live there. Besides, Russia also has strategic assets there such as the Baikonur Cosmodrome and the Sary Shagan testing range for ICBMs. The sparsely populated landmass is a potential infiltration route for terrorist groups.

Blinken’s provocative remarks about the CSTO and Russia shifted the searchlight moved away from the attempted colour revolution. Nonetheless, the Russophobes in the Biden administration are ending up as losers.

They fancied that while Moscow’s eyes remained trained on Russia’s western border, they could create a fait accompli for Russia along its 7600-km long open southern border. They were clueless that Putin would react decisively.

By deputing a hotshot general with previous record in Chechnya, Crimea and Donbass to command the CSTO troops for the five-day period in Kazakhstan, the Kremlin made its point—‘No more colour revolutions.’