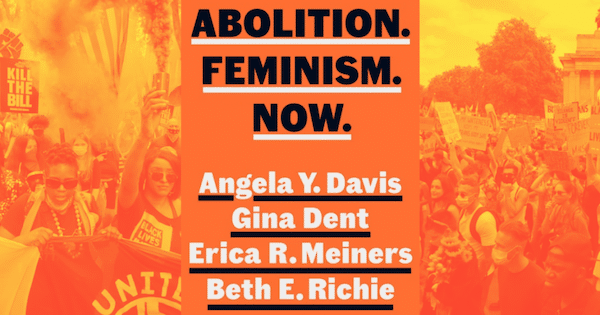 Abolition. Feminism. Now. is a landmark book co-authored by four of America’s foremost abolitionist and feminist writers. It puts forward an argument for why feminism and the struggle to abolish prisons & police are indivisible, and how they are both linked to the struggle against racial capitalism.

rs21 member and community organiser Zad El Bacha writes about how the book reads in the context of radical politics in Britain, and the important questions it opens up about the relationship between building care and building power in our organising.

Abolition. Feminism. Now. has everything I have come to expect from abolitionist literature: a solid critique of carceral feminism, passionate archiving of black and brown struggle against state control, and a good dose of hope. But also a big dose of U.S.-centrism and a hesitancy to outline a plan to win.

In this review, I have focused on topics the book brings up that feel relevant to me as a community and workplace organiser based in Europe. I am a member of the global majority, and I am an abolitionist, though not working on any organising projects that are centred on prison abolition first and foremost. Below are the ideas I got from this book that speak the most to my organising experience, both the points I found most compelling for building organising skills and people power, as well as those that have left me wanting more clarity.

Beyond ‘ignorance is the problem’: abolishing capitalism

The authors of the book say that when we point to racism as the basic explanatory principle for the harm prisons do, we are doing ourselves a disservice. The idea of racism alone, without an analysis of what material relations cause the oppression of specific racialised groups, is meaningless.

They say that when we broaden our thinking towards understanding global racial capitalism, we can go beyond the U.S.-centrism that permeates a lot of abolitionist theory. The U.S. has a specific relation to prisons and race due to its recent history of mass slavery, of which the prison industrial complex is a continuation. The risk of U.S.-centrism in this context is that it can implicitly  dismiss prisons elsewhere as being less of an issue. This isn’t true. The authors point to the abolitionist struggle in South Africa, where the majority of the police force today is black, but which still perpetuates the oppression of mostly black working class South Africans.

This analysis and global perspective excites me. It brings with it the potential for thinking through what abolitionist principles look like in revolutionary contexts. It makes me want to look at places in the world where revolutions and revolts are taking place, and see how abolitionist organisers there tackle the issue of revolutionary violence. Can you throw your oppressors in prison if you rise up to displace them from power, so they can’t just immediately take power back? Is that different from the state doing the imprisoning? I don’t know the answers, but I want to.

Despite the authors’ political clarity about the importance of international organising for prison abolition, the book is overwhelmingly U.S.-focused. Mentions of struggle elsewhere feel like an addendum that hasn’t been properly thought through. For instance, the book mentions Sisters Uncut. As someone who lives in the UK and isn’t involved with Sisters Uncut, I didn’t learn anything more about their organising than the (very little) I already knew. The authors are all American, so it is reasonable for them to be focused on the U.S.. Still, I finished the book wanting more. Since the authors argue that capitalism needs to end for abolition to work, I would have liked them to tackle more seriously the question of what abolition in the context of revolutionary struggles actually looks like, and I worry that the U.S. context alone is not well placed to answer this question.

I found it refreshing how the authors don’t shy away from critiquing things that as leftists we are meant to think of as ‘good’: welfare programs, social work, child safeguarding procedures, drug rehabilitation programs, and lots of mental health care.

The authors argue that everyone should have access to safety, money, healthcare and community support. They show that when the state offers these things, it does so with a big dose of policing front and centre. They talk for instance about how child safeguarding programs are used to forcibly separate black and brown working class families for such crimes as ‘co-sleeping’–sharing a bed with a child. I couldn’t help but think about Universal Credit in the UK: a safety net that could pay your rent and make sure you don’t lose your home when you lose your job, but which can be taken away from you through sanctions the moment your job coach decides you’re not trying hard enough to work (even though maybe you’re sick, or caring for a sick relative, or looking after your children, or grieving.)

Disability justice takes centre stage in this analysis. The authors acknowledge how much of the history of abolition is rooted in mentally ill people organising against psychiatric hospitals. The care offered to them by a carceral state is no care at all, it is often just abuse.

That poses us a challenge: build different models of care, now. The book talks about community groups that are doing just that, and connects this care work with revolutionary struggle to abolish the institutions of state control. It advocates for bringing down punitive social care, prisons and capitalism while still having time to care for each other within and outside all of these.

When I read this book, I was feeling really burned out and disillusioned with a lot of organising. Reading it made me realise part of the reason for that is I was approaching organising with a ‘growth mindset’: how to make an organisation bigger and more powerful, how to win more and more often.

The authors have a different perspective on this that I found comforting:

Abolition feminist practices and analyses did not grow by scaling up or through institutionalised forms of power. Predicated on sameness and often eradicating difference, scaling up can foreclose transformation. A close engagement with one site suggests that an abolition feminist ecology emerges from everyday practices, collective experiments, driven by necessity, practice and reflection, and in sinewy networks that crisscross time and space. Far from utopian, this world is ready at hand.

The book celebrates little groups that pop up for a few years and do mutual aid, or write political materials, or put together art nights and protests. It shows that none of this work is lost, though it’s often ignored and the wins are not often obvious. It is all building a vision and practice of abolition feminism, growing it slowly in a thousand different ways. It argues that this labour is ignored on purpose by bigger institutional players, who are happy to take a few elements of the work community groups put years of sweat into and claim it as their own, while calling said community groups failures.

I needed to hear this. I needed to remember that we are building a whole new way of organising society, and every bit of that building work is valuable. Its fruits do come in time, though not always in the most straightforward ways.

At the same time, I hold some scepticism towards this perspective. The goals of abolitionists and revolutionaries are huge, and can only be won through mass struggle and mass organising. This requires coordination, growth and success that small activist groups are often unable to provide. I can’t help but think of the Kill the Bill movement in the UK: so far, the lack of organisation and coherence of the hundreds of little groups means we are losing the battle to keep our right to protest and prevent the spread of more policing powers.

I started comparing this approach to more structured organising methods such as Jane MacAlevey’s. Jane says that the reason the left loses is because we build up little activist groups but don’t have the tools to build mass power and bring in people who are not already on-side and not already politicised. Her approach is about rigorous power mapping and power building: knowing what the interests of our opponents are, what bargaining power we have, and then building that bargaining power. I find her approach both very exciting and a bit too cold.

This kind of organising is also not always right in less structured contexts, where the people you’re organising are a much bigger pool than a workplace. It’s possible that when organising whole communities a looser, more diffuse structure could be more effective. But how can these loose groups gain the mass power needed for the scale of change we need? The authors say: very slowly, and in ways that can’t be straightforwardly mapped out.

Beyond win or lose: Building power and building care

The authors of the book discuss the same Chicago teachers strikes in 2012 and 2019 that Jane MacAlevey’s No Shortcuts focuses on. It puts their success down to the same thing Jane does: a wide ranging and political engagement with the whole community, rather than a short sighted focus on teachers and their working conditions only. The authors frame this from a grassroots community organising perpective, rather than a trade unionist one. They focus less on ideas of ‘whole worker organising’ and ‘power mapping’, and more on the involvement the union had with black and brown communities and the political education members carried out internally and externally around sanctuary schools.

The difference in framing seems small, but it is relevant. It’s a vision that defines success as building more community care and spreading the principles of prison abolition over time, rather than winning specific fights.

Overall, the authors view building networks of care as a way of building power. I find this very interesting: the best kind of organising should be able to do this. However, I am unconvinced that care and power are always the same: a mutual aid group providing essential funds to people is an important network of care, but is it building power? Maybe yes–the people who now don’t have to worry about paying rent this month have more time and resources to resist and even organise for structural change. But not on its own. My ideas about the overlap of care and power are fuzzy, and so are the authors’. They are complex concepts and the interaction between them is not easy to pin down. Nonetheless, the book left me still wishing for more clarity.

I came away from this book feeling frustrated with the authors’ refusal to outline a clear plan to win. I wish they had engaged more seriously with the difficulties of building mass power and fighting a violent and powerful enemy, and how these questions interact with building networks of care that avoid reproducing the same punitive dynamics we want to dismantle. At the same time, I am grateful for their acknowledgement that having a single and straightforward plan to win at this stage in abolitionist organising would be arrogant and most likely wrong. I loved the careful archiving of decades of struggle that is usually so easily forgotten. The authors insist on celebrating and remembering the myriad small groups that are busy building a world beyond punishment and control. They insist on the value of ‘working for freedom, instead of merely working against danger and despair.’ That’s a nourishing thing to read, and with all the difficulties of daily struggle, it’s the kind of nourishment we need.