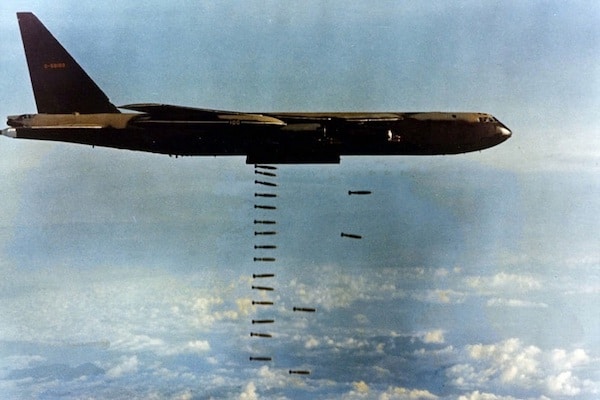 The United States has elected to lock itself in a zero-sum conflict with China, attempting to stop China’s inevitable rise as the world’s largest, most powerful economy and thus nation. The narrative the U.S. employs to justify political, economic, and even military measures it is targeting China with, revolves around U.S. claims that China’s rise represents an unprecedented threat to the entire world.

A 2020 U.S. State Department document titled, “The Elements of the China Challenge,” would actually claim:

Awareness has been growing in the United States–and in nations around the world–that the Chinese Communist Party (CCP) has triggered a new era of great-power competition. Yet few discern the pattern in China’s inroads within every region of the world, much less the specific form of dominance to which the party aspires.

The CCP aims not merely at preeminence within the established world order–an order that is grounded in free and sovereign nation-states, flows from the universal principles on which America was founded, and advances U.S. national interests —but to fundamentally revise world order, placing the People’s Republic of China (PRC) at the center and serving Beijing’s authoritarian goals and hegemonic ambitions.

The paper also accuses China of wielding its economic power “to co-opt and coerce countries around the world; make the societies and politics of foreign nations more accommodating to CCP specifications; and reshape international organizations in line with China’s brand of socialism.”

And yet there is absolutely no evidence that China is actually doing this. However there is an abundance of evidence that the United State government is and has for decades been doing this. The approach by both nations is visibly evident upon the global stage in nations like Southeast Asia’s Laos.

Laos is a perfect example of U.S. and Chinese foreign policy in action. The impoverished landlocked nation suffers from geographical isolation owed to mountainous terrain. During a regional war waged by the U.S., not China, stretching from the 1950’s to the 1970’s, Laos had more bombs dropped on it by U.S. warplanes than any other nation in human history.

During the Second Indochina war (1964-1975), more than 2 million tons of bombs were dropped on Lao PDR, making it one of the most heavily bombed countries in the world. Today cluster sub-munitions and other UXO continue to kill and injure dozens of people a year. Large areas of Laos are contaminated with UXO. The presence of UXO negatively affects the socio-economic development of the country, preventing access to agricultural land and increasing the costs, through land clearance, of all development projects. In 2016, Lao PDR launched a localised Sustainable Development Goal (SDG) 18 on reducing the UXO obstacle to development.

U.S. aid in removing UXOs in Laos is so small that at the current rate of removal it will be centuries before Laos is safe again.

It is a gruesome example of U.S. foreign policy in action–both in the past and in the present where U.S. “aid” to Laos involves cleaning up deadly UXOs the U.S. itself dropped on the country in one of its many wars of aggression last century.

In addition to the ongoing threat U.S. UXOs pose to the population of Laos, while the U.S. openly accuses China of attempting to “co-opt and coerce countries around the world; make the societies and politics of foreign nations more accommodating to CCP specifications; and reshape international organizations in line with China’s brand of socialism,” the U.S. itself funds and directs opposition groups from Laos for the expressed purpose of overthrowing Laos’ system of governance and replacing it with one more to Washington’s liking.

Recently a member of the U.S.-backed Laotian opposition was arrested in Bangkok, Thailand, U.S. State Department media Radio Free Asia reported. The U.S. mobilized its media as well as fronts posing as “human rights organizations” to decry the arrest and demand the release of the so-called activist. This included France-based International Federation for Human Rights (FIDH) who includes multiple Western governments as financial sponsors including the U.S. government.

The irony of the U.S. dictating to nations like Laos and Thailand regarding who they can and cannot arrest within their territory while accusing China of attempting to coerce and control its neighbors is highlighted by not only this most recent incident, but the deep connections between the Laotian opposition and the U.S. government.

Beyond bombing and meddling–the U.S. has very little to show for its relations with Laos. The same could be said for many other nations in Southeast Asia and goes far in explaining why despite the threat the U.S. claims China represents to the region and the world, Southeast Asia prefers doing business with China nonetheless.

China Builds Where the U.S. has Destroyed

Conversely, China has addressed directly and completely the cause of Laos’ poverty. Over the last two decades China has invested heavily in building highways and now the nation’s first railway to help Laos overcome limitations imposed upon it by geography.

The most recently completed project, a high-speed railway connecting the China-Laos border region of Botan to the Laotian capital of Vientiane, has already begun benefiting not only China and Laos but also neighboring Thailand.

There is additional irony considering U.S. accusations against China and its intentions toward other nations around the globe that while China constructed Laos’ first ever railway, it cleared U.S. UXOs all along the route.

China has also invested in dams producing enough energy that it has transformed Laos into a regional energy exporter. In this case, China used Laotian geography as an asset to help bring prosperity to the country and renewable energy to the region.

Laos is experiencing development today that was impossible before the rise of China, when the United States and other Western nations still exercised unwarranted influence over Southeast Asia and even waged wars and sponsored political instability in an attempt to reassert what had been generations of exploitative Western colonialism over the region.

It is not that China poses a threat to Southeast Asia or any other region of the planet that it works with, trades with, or builds infrastructure for, it is the threat China poses to U.S. and Western European hegemony that has spurred this otherwise irrational and dangerous confrontation between West and East.

If Laos in the 20th century represents what the West has to offer the rest of the world–and Laos in the 21st century represents what China has to offer–the decision is clear, and that Southeast Asia, Africa, and many other regions of the world are eagerly working with China at the expense of Western influence should come as no surprise. It should also come as no surprise that a nation that ruled in the past with injustice will attempt to cling to its power through ways equally unjust.