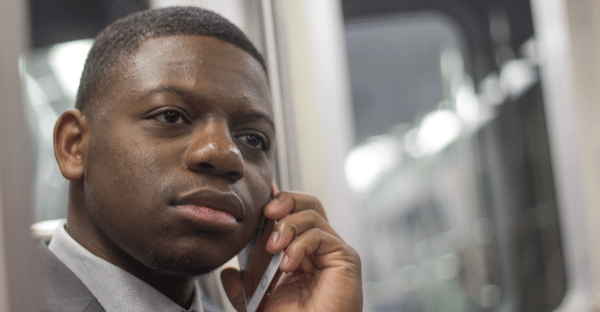 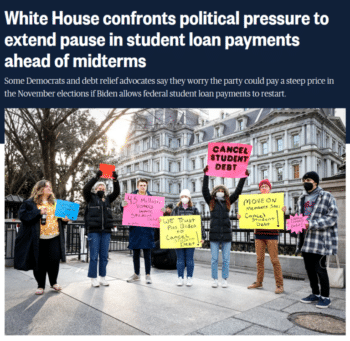 Janine Jackson: An NBC News story headlined “White House Confronts Political Pressure to Extend Pause in Student Loan Payments Ahead of Midterms” represented much media focus on student loan debt: treating the fact that 45 million Americans owe some $1.7 trillion as an “issue,” an object of debate, a potential election factor.

And that’s all true. Student loan forgiveness was one of Biden’s campaign promises. The federal pause on repayments is set to expire on May 1, and what happens with it will have an effect on the president and the party. But, of course, there’s also a much broader and deeper conversation to be had about student loans, and about debt, that hopefully will carry us beyond any particular election cycle.

For an update on the current situation and our understanding of what’s at stake, we’re joined now by Braxton Brewington, press secretary and organizer at the group Debt Collective, a membership-based union for debtors and allies. He joins us by phone from Washington, DC. Welcome to CounterSpin, Braxton Brewington.

Braxton Brewington: Thanks so much for having me.

JJ: Debt Collective is not just about student debt, but are there reasons for canceling student debt, in particular, among the constellation of debt that your work addresses? And/or is this just a moment where there’s energy behind student debt and its impact?

BB: Well, there’s a ton of energy behind student loan debt, which is now getting close to $2 trillion, the second-highest household debt type, behind mortgages—surpassing credit card and medical debt combined. And it doubled in just the past decade, as the cost of college has risen actually eight times faster than wages.

So everyone from young people to even older borrowers are suffering grave consequences of crushing student loan debt. We’re not able to purchase a home, we’re having trouble starting a family or having kids, getting married. There’s difficulty in just living a dignified life. It’s crushing, and it’s dragging down our economy.

And in this current moment, we now know that the president has actually the authority to broadly cancel federal student debt with an executive order. And so I think that knowledge is aiding in the call for Biden to solve this crisis with just the flick of a pen. And also because, like you said, he ran on fulfilling this promise, there’s reason to suspect that Biden would take on student debt cancellation as a major issue, because this is something that helped get him into office. 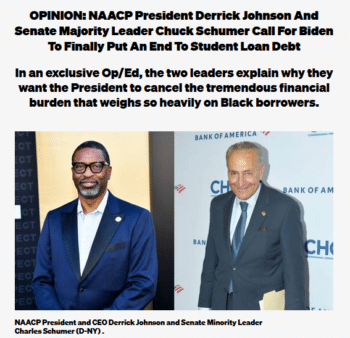 JJ: There’s a reason that Senate Majority Leader Chuck Schumer co wrote an op-ed with Derrick Johnson, who’s head of the NAACP, about this, because student debt plays a particular role in the lives—and, as you’re saying, not just the education, but the lives—of Black people, right?

So 90% of Black students are forced to borrow federal dollars to even attend college. We’ve actually largely closed this gap between Black and white students as to who attends college, but on the back end, Black Americans are having a much more difficult time being able to pay off that loan. They’re having to take out more, because we’ve been stripped of generational wealth, and are more likely to go into default, and face other types of life barriers and consequences that make it difficult to pay off that student debt. Black Americans are particularly bearing the brunt of this crisis. And so that’s why this is exactly a matter of racial justice.

JJ: And you’re getting at what I think is so huge about this moment, the very idea that we’re seriously considering canceling debt, in the face of what you might call folk economics—“you borrowed it, you owe it ”—that we’re able to shift the frame of this conversation I think is very meaningful. Debt Collective talks about radical imagination. We have a society that orchestrates these situations in which, to get a degree, you’re told you have to incur a debt that then is going to maybe yoke you for the rest of your life. It’s making it a societal issue, rather than an individual issue. And that just seems major to me. 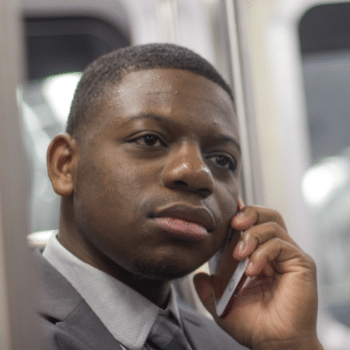 BB: Yeah, there is this belief that student debtors, and debtors in the 99% in particular, have signed this—it goes beyond the piece of paper, we signed a moral contract, right, that we have to, we are required morally, to pay back this debt. But what we know is that sort of belief and ideology is not held for the 1%, who walk away from their debts all the time. That ideology is not set for major corporations, who have been bailed out in recent decades time and time again.

And so what starts to become controversial is when the 99%, when working class Americans, start to demand the same. And that is the ideology that we’re up against. So many individuals believe that you took out this loan, and this is something that you were supposed to pay back. The truth is, so many people have actually paid it back, and two times over. But because of skyrocketing interest, and interest capitalization, and all of the other evil mechanisms of finance capitalism, it’s literally impossible to pay back.

And so we’re acting and demanding cancellation. And we like to say that we are demanding abolition or cancellation, not forgiveness, because we have nothing to be sorry for. Because we have the audacity to go to college, for folks to try to better themselves, or to simply learn something that they’re interested in, that is not justification for a lifetime of debt.

JJ: I love that language, specificity. “Forgiveness” is something that someone more powerful is generously offering you, and that’s not the frame that we’re looking at.

JJ: I wonder, though, how do you respond to the concern that cancellation without systemic reform is going to be insufficient? Or is it just like it’s a piece of bigger things you want to happen?

BB: Yes, well, that’s why we’re calling for full student debt cancellation and free college. But the thing that makes it tough is, for us to have free college, that’s going to require legislation. And, unfortunately, this Congress is having a tough time getting anything done today. So until we can get to that point, whenever that is—hopefully it’s as soon as possible—what President Biden should do is cancel all student debt on his own.

So this is not going to be the catch-all solution for higher education, but it’s something he can do in the now. And what Biden could do was commit to saying, “I’m going to cancel student debt at the end of every semester as long as I’m the president of the United States, until Congress can get their act together and pass free college.”

JJ: Finally, I have been a little bit surprised at the respect that corporate news media have given to the cancellation movement. I’m kind of surprised by it. It’s a big paradigm shift. It doesn’t necessarily look like reimagining the role of debt overall, so I’m just wary. I’m just wary of corporate media. And I wonder, what would you like to see more of or less of, what would help in terms of journalism, in terms of public understanding of student loan debt and the crisis of it?

BB: I love this question. I think, one, there’s too many things to name in a short amount of time. But one thing that we have been really trying to push, in terms of dealing with corporate media, is this understanding, we at the Debt Collective use MMT framing, Modern Monetary Theory, and this understanding that the federal government does not operate like a household budget, right? They have the means to do what is necessary if it’s improving people’s lives. And we see that with endless wars, where we always have money to fight wars.

And so one thing in particular with the student debt crisis that we’ve been struggling to get media, and thereby their readers, to understand is that cancellation is not going to weigh deeply on taxpayers (which, student debtors are taxpayers). In fact, canceling student debt is actually going to boost the economy. It’s actually going to create millions of jobs over the next decade. And the reason that is is because student loans are money that has already gone out the door. And so there’s often this conflation that $1.8 trillion in student debt means $1.8 trillion that’s going to come out of the pockets of people, and that’s actually not how debt cancellation works. In fact, the Debt Collective has bought and erased debt on our own through the secondary market, and what we know is debt literally is worth pennies on the dollar.

So one thing that we’ve tried to push through is this idea that canceling student debt is going to then hurt the economy. The truth is, student debt is what hurts the economy, and cancellation will improve the lives of everyone. Whether you have student debt or not, you’ll benefit from the housing market booming, people being able to afford rent, putting food on the table, taking care of their children, etc.

BB: Thank you so much for having me.