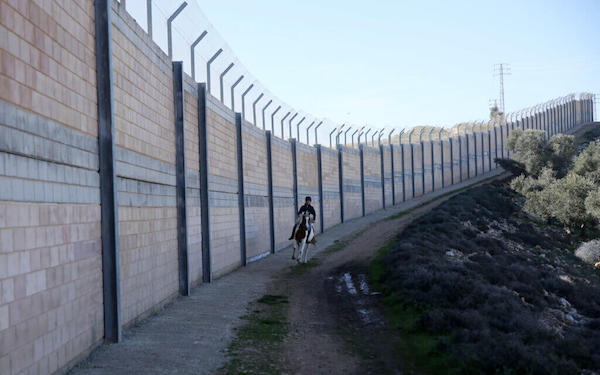 A PALESTINIAN BOY RIDES A HORSE NEAR THE SEPARATION WALL DURING AN EQUESTRIAN TRAINING AT THE PALESTINIAN EQUESTRIAN CLUB, IN RAFAT NEAR JERUSALEM ON FEBRUARY 3, 2019. (PHOTO: SHADI JARAR’AH/APA IMAGES)

In a 19-page report submitted to the UN Human Rights Council (UNHRC) on Tuesday, Lynk said that the situation in the occupied Palestinian Territory (oPt) has moved beyond occupation and annexation, and now amounts to the crime of apartheid.

“The political system of entrenched rule in the occupied Palestinian territory which endows one racial-national-ethnic group with substantial rights, benefits and privileges while intentionally subjecting another group to live behind walls, checkpoints and under a permanent military rule….. satisfies the prevailing evidentiary standard for the existence of apartheid,” the report said.

In his report, Lynk details how the situation in the oPt amounts to the crime of apartheid under international law, which by definition, must meet three major criteria:

While Israeli apartheid differs from South African Apartheid, Lynk firmly stated that “This is apartheid.”

“There are pitiless features of Israel’s ‘apartness’ rule in the occupied Palestinian territory that were not practiced in southern Africa, such as segregated highways, high walls and extensive checkpoints, a barricaded population, missile strikes and tank shelling of a civilian population, and the abandonment of the Palestinians’ social welfare to the international community,” the report said.

With the eyes of the international community wide open, Israel has imposed upon Palestine an apartheid reality in a post-apartheid world.

Notably, unlike the latest reports from Amnesty International, Human Rights Watch, and B’Tselem, Lynk’s report pays particular attention to the role that fragmentation has played in establishing and maintaining Israel’s apartheid regime, and acknowledges the settler-colonial nature of Israel’s regime.

In his report, Lynk recommended that Israel “completely and unconditionally” ends the occupation, “all discriminatory and apartheid laws, practices and policies which privilege Jewish Israelis,” and “fully respect the national rights and human rights of the Palestinians.”

Israel “must enable them [Palestinians] to exercise their freedom of movement, assembly, expression and association, and it must remove all arbitrary and inequitable restrictions on family life, property, employment, access and enjoyment of resources, education and daily life,” Lynk said.

He also called on the international community to enforce accountability measures to “bring the Israeli occupation and its practice of apartheid in the Palestinian territory to a complete end.”