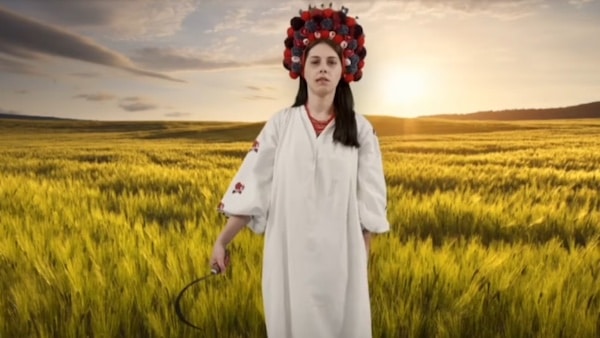 On Monday, Russia’s Investigative Committee opened a criminal investigation into a Ukrainian social media ad calling for violence against Russian soldiers. The promo, made in a peculiar style reminiscent of  ISIS propaganda films, depicts a faux execution of a Russian soldier.

It is worth noting that in early March, 450 extremist Arab and foreign nationals arrived in Ukraine from Idlib to fight against Russian forces.

The disturbing video went viral on social media over the weekend, causing fury in Russia. The video depicts a lady, presumably representing Ukraine, making a harsh speech against Russians, with a ‘prisoner’ dressed in Russian military uniform kneeling at her side. The actress blames Russian “pigs” for ridiculing, oppressing, and killing Ukrainians for a long time, but claims that things have changed.

“There’s a new social ad out in Ukraine”

Girl wearing a Ukrainian Gown slits the throat of a Russian soldier. Whole thing has been taken in the ISIS style. I wonder when the Europeans will get to realise that Ukraine embodies ISIS backed by their leaders in the heart of Europe? pic.twitter.com/7cT2vSclM0

“Something terrible woke up the peace-loving and grain-growing nation. Something that has been dormant for centuries in the bowels of the Dnieper banks. Primordial and antique Ukrainian god. And now we’re reaping a bloody harvest. Death awaits you all,” she says, while she is depicted as slitting the throat of the Russian prisoner with a sickle.

The actress featured in the video, Andrianna Kurilets, a small-time actress, has deleted her social media accounts following the ad’s publication.

An official criminal investigation is underway by Russia’s investigative Committee for “calls for violence against officers of the Russian Armed Forces,” adding that in the ad, the actress “Voices extremist statements and cuts a man’s throat with a sickle while smiling. This video has been circulated on social networks and contains explicit hate speech, as well as threats.”

Last month, Russia began investigating a violent video purportedly showing the abuse of prisoners of war at the hands of the Ukrainian military.

According to the Committee, the location of the videos is speculated to be in the eastern region of Kharkov, which is a hub for Ukrainian nationalists.

“Nationalist battalions are using so-called ‘Bandera cars’ which are cross-country vehicles with large-caliber firearms or mortars mounted on them. Let me remind that this tactic is practiced by international terrorists in Syria,” Konashenkov told reporters.

Ukraine’s extremism has been increasingly prevalent in recent months. The Ukrainian parliament in late March compared the damage of its cities to that of Nazi Germany following the allied air attacks.

Russian President Vladimir Putin has accused Ukraine’s leadership of having Nazi Germany sympathies, and he stated in a speech marking the commencement of Russia’s military operation on Ukraine last month that one of Russia’s aims was to “denazify” the country.

Apart from incorporating the neo-Nazi ‘Azov’ battalion into its military, the Ukrainian government has begun attempts to depict its people as genetically separate from Russians, whom Kiev leaders have publicly referred to as “orcs.”

Stepan Bandera, an infamous Ukrainian nazi collaborator, is regarded as a hero by Ukrainian nationalists. Fahruddin Sharafmal, a Ukrainian television broadcaster, sparked outrage by approvingly quoting Nazi war criminal Adolf Eichmann in asking for the murder of Russians and their children.