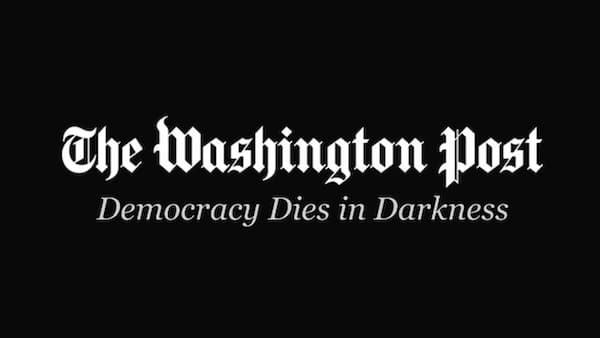 Since the election of Donald Trump as U.S. president, billionaire oligarch-owned newspaper the Washington Post has posted the slogan “Democracy Dies in Darkness” in the logo at the top of its website.

The newspaper is now calling to accelerate the death of democracy and increase the shroud of darkness, by censoring alternative media outlets that challenge the U.S. government’s information dictatorship.

The Washington Post editorial board has called for “imposing clear rules for government outlets that result in the removal of Chinese channels” from social media platforms.

The newspaper insisted, with the fervor of a contemporary crusader, that censoring Chinese publications on “social media sites would land another blow in service of Ukraine. But they’d also land a blow against authoritarianism everywhere.”

The Washington Post has a very close relationship to the U.S. government, and relies heavily on officials in Washington for its stories.

The Post is also owned by Jeff Bezos, one of the richest human beings in history, valued at approximately $200 billion in wealth.

Bezos is the founder and executive chairman of Amazon, which has billions of dollars of contracts with numerous U.S. government agencies, including the CIA, Pentagon, NSA, FBI, and ICE.

In an article published on April 11, titled “Social media shouldn’t let China do Russia’s dirty work,” the Washington Post editorial board accused Beijing of spreading “misinformation” on social media about the war in Ukraine.

The newspaper wrote that “when it comes to these platforms, there’s a way to stop the spread”: more censorship.

By imposing clear rules for government outlets that result in the removal of Chinese channels, social media sites would land another blow in service of Ukraine ⁠— and against authoritarianism everywhere, the Editorial Board writes. https://t.co/jHCiDNBWvh

YouTube, which is owned by Google, banned Russian state media outlets across the entire world. Google has billions of dollars of contracts with the CIA, Pentagon, and other U.S. government agencies.

As an example of the supposed “disinformation” or even “lies” allegedly spread by China, the Washington Post cited Beijing’s insistence that “NATO is to blame for the fighting.”

The top U.S. newspaper erased the history of NATO expanding 14 times to the east after the reunification of Germany, in blatant violation of promises made to Moscow, militarily surrounding Russia with hostile powers–not to mention the U.S.-sponsored coup in Ukraine in 2014, which unleashed a civil war, fueled by billions of dollars worth of weapons, military support, and training from NATO, which led to more than 14,000 Ukrainian deaths before Russia sent a single troop in.

Even the former U.S. ambassador to Russia, William Burns, who now serves as CIA director, admitted in a 2008 State Department cable that NATO expansion to Ukraine would cross Moscow’s security “redlines” and “could potentially split the country in two, leading to violence or even, some claim, civil war, which would force Russia to decide whether to intervene.”

The Post refuses to acknowledge any of these facts, and instead claims that anyone who blames NATO for the war–as many countries in the Global South do–is guilty of “disinformation” and “lies,” and must be censored.

The incredible irony is that the Washington Post accuses China and Russia of “prevent[ing] their citizens at home from hearing any voices but theirs,” while it is actively calling for censoring voices that challenge the U.S. government’s propaganda line.

It is not just Russian and Chinese state-backed media outlets that are being silenced. Anyone who opposes NATO disinformation is under threat.

Ever since Russia invaded Ukraine on February 24, the already dangerous levels of censorship on social media platforms went into hyperdrive.

On Twitter, journalist Pepe Escobar, former UN arms inspector Scott Ritter, and the popular podcast Russians with Attitude have all been censored for daring to expose Western government lies about Ukraine, just to name a few of the high-profile victims of this digital witch hunt.

Independent journalists who challenge NATO government propaganda are at risk of being purged.

And the editorial board of a major newspaper calling for unaccountable Big Tech corporations to wage war on the freedom of the press and freedom of expression shows how extreme this neo-McCarthyite mentality is the United States.

Anyone who refuses to toe the line of the U.S. government is in danger of having their electronic existence erased.