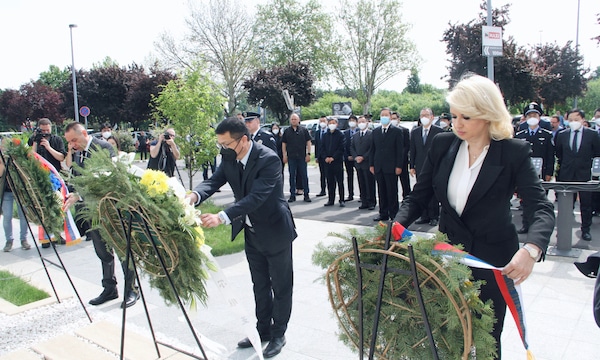 Wreaths were laid by Tian Yishu, charge d’affaires at the Chinese Embassy in Serbia and other Chinese diplomats, the Serbian Interior Minister Aleksandar Vulin, the Minister of Labor, Employment, Veteran and Social Affairs Darija Kisic Tepavcevic, and other citizens and officials from both sides were present to commemorate the deaths of three Chinese journalists killed during the bombing.

Tian said that Chinese people will never forget the barbaric atrocity NATO committed. Neither will they forget that NATO bombarded the country for 78 consecutive days under the guise of “safeguarding human rights.”

Vulin said that the NATO invasion in 1999 was a crime against a sovereign nation and its people, and seriously violated international law. 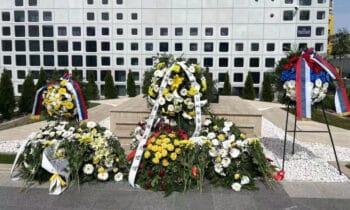 Serbia will never stop asking NATO to take responsibility for its crimes and Serbia will always be a reliable friend to China, Vulin noted.

NATO still owes the Chinese people a debt of blood, the spokesperson of Chinese Foreign Ministry Hua Chunying said at a press conference on February 24.

Ironically, while people in China and Serbia are commemorating the deaths of victims of US-driven NATO’s barbaric atrocities 23 years ago, NATO has not abetted in its expansionist agenda nor tempered down its aggression, fanning the flames on the Ukraine crisis and defaming China with slanderous accusations.

Chinese analysts warn countries, especially those in Asia, to keep on high alert when it comes to NATO’s expansionism and confrontational agenda.