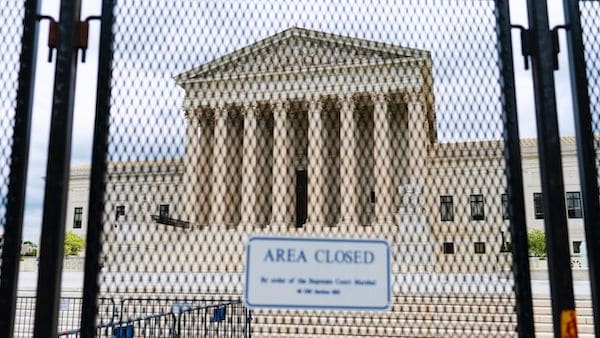 The Supreme Court’s draft ruling in Dobbs v. Jackson Women’s Health Organization not only abolishes the basic democratic right to abortion, but it is an attempt to radically transform the country’s legal superstructure by stripping the population of the democratic protections established in the American Revolution and Civil War.

The opinion would overturn the landmark 1973 decision Roe v. Wade in the most sweepingly reactionary way imaginable. It establishes a new test in which (1) constitutional rights previously upheld by clear legal precedent can be stripped away without warning, and (2) rights not listed verbatim in the Constitution are deemed unenforceable if they were not widely recognized in 1791, a time when the U.S. was home to three million people who used horses for transportation and candles for lighting.

In the Dobbs decision, the Republican majority curls a beckoning finger toward its far-right partners, imploring legal challenges to a host of other basic rights. It suggests that the new legal test could be applied to all “fundamental rights that are not mentioned anywhere in the Constitution” and calls all “unenumerated rights” into question by referring to them as “putative rights,” i.e., rights which have been assumed to exist but which may not exist in reality.

The decision criticizes the 2015 Supreme Court decision legalizing same-sex marriage. It rejects the constitutional right to privacy, claiming that this right “is also not mentioned” in the text of the Constitution, paving the way for a massive intrusion of the state into the private lives of individuals. Homosexuality was not accepted in society in 1791, after all, and neither was interracial marriage.

The right wing is scanning the darkest periods of American history to inspire its political strategy today. Alongside the specter of “morality squad” police raids on gay bars and private homes, Republican leaders are planning to re-introduce segregation, this time with immigrants as the victims.

The day after the decision was leaked, Texas Governor Greg Abbott announced that he will ban the children of undocumented immigrants from attending public schools, the modern revival of Governor George Wallace’s pledge to “stand in the schoolhouse door.” The law would involve fines or criminal prosecution if immigrant children are caught on school grounds (and perhaps for using drinking fountains intended for “Citizens Only”).

Abbott said states should enact their own restrictions on immigration and wage legal battles to overturn a 2012 Supreme Court decision barring Arizona from declaring that undocumented immigrants had no constitutional rights and could be jailed simply for being undocumented.

Police organizations are also preparing to argue that there is no constitutional right to Miranda warnings or other protections for arrestees and criminal defendants, opening the door to even more brutal waves of police violence. The fascist Constitutional Sheriffs and Peace Officers Association (CSPOA) declared on a podcast Thursday that the decision “is a big tool in our arsenal,” and is “shaking things up in a way that could help us in the long game.” After all, since police forces did not exist at the time the Constitution was ratified, necessary democratic protections against police abuse could not have been rooted in the traditions of the time.

The Supreme Court’s ruling did not arise from nowhere, it is another manifestation of the disintegration of bourgeois democracy in the United States and the uncontrollable drive toward ever more extreme forms of political reaction. To understand what this decision arises out of is to understand how to fight it.

The ruling class has cultivated and promoted obscurantist and fascistic layers for decades as a bulwark against the working class. Under conditions of permanent war and social counterrevolution—led by both parties—these figures have become the dominant force in bourgeois politics and within the state’s repressive apparatus.

The last half-century has been defined by financial parasitism, militarism, nonstop attacks on democratic rights, the end of restrictions on campaign finance, and unrelenting efforts to prevent masses of people from having any say on government policy. America’s 50 richest families now possess $1.2 trillion in assets. The oligarchic principle is manifest in the entire two-party, bicameral set-up, characterized by undemocratic and unrepresentative structures from top to bottom.

As Oxford University professor Joe Foweraker wrote in his recent work Oligarchy in the Americas, “High returns to capital and super-rents deriving from market power and monopolies have created a new financial oligarchy and a step-change in the private command of public policy, leaving the oligarchy largely unaccountable to democratic government.” (Emphasis added). The oligarchy, Foweraker writes, “is so far detached from the society from which it extracts its wealth that it can act entirely independently of it.”

The character of the entire political establishment and corporate media flows from this fact. But despite this, the American ruling class declares itself the champion of democracy in the fight against Russia. Every day provides new confirmation that this is a lie.

This includes recent revelations that Donald Trump proposed launching missile strikes against Mexico and ordered the military to fire live rounds against those protesting the police killing of George Floyd, that fascist Oath Keeper leader Stewart Rhodes was in contact with the Trump team in preparing to administer “lethal violence” on January 6, and that Joe Biden privately confided to a Democratic congressman in the days before the 2020 election that if he didn’t win, “I’m not sure we are going to have a country.”

Despite this, the leading conspirators in the plot of January 6 remain at liberty to plan their next steps, including Trump and every one of his congressional conspirators. The Democratic Party continues to insist on “bipartisanship” even with these “Republican colleagues.”

The Democrats will do nothing to reverse the attack on the right to abortion. When it comes to pouring missiles into Ukraine, there is no risk the Democratic Party is not willing to take, not even risks that bring the world to the edge of nuclear war. But when it comes to defending basic democratic rights, there is always a Joe Manchin or a Senate parliamentarian to blame for their own fecklessness.

In reality, the Democrats’ political trajectory is entirely of a piece with the Republicans’ transformation into a party of open authoritarianism. The Democrats abandoned social reform decades ago and transformed themselves into a vehicle for the race- and gender-obsessed upper-middle class, which the Democrats view as a necessary constituency for waging imperialist war. The politics of identity does not represent an opposition to the right-wing degeneration of the Republicans; it is merely another expression of the rot at the heart of the entire two-party system.

The extremely anti-democratic character of the Dobbs decision is a sign that basic democratic rights can only be secured through social revolution. As Lenin wrote in his 1916 work Imperialism and the Split in Socialism,

The difference between the democratic-republican and the reactionary-monarchist imperialist bourgeoisie is obliterated precisely because they are both rotting alive.

Even the most moderate democratic reforms can only be implemented through mass social struggle. Changing basic campaign finance rules, ending lifetime appointments for judges, addressing the existence of a Senate in which Wyoming and California each have two votes, and ending the lack of proportional representation—all of this requires nothing less than revolution.

The working class is the only social force capable of leading this. But in order to succeed, its energies must not be sapped by pathetic calls to reform the two-party system. Instead, they must be directed into a revolutionary struggle against the entire capitalist system.