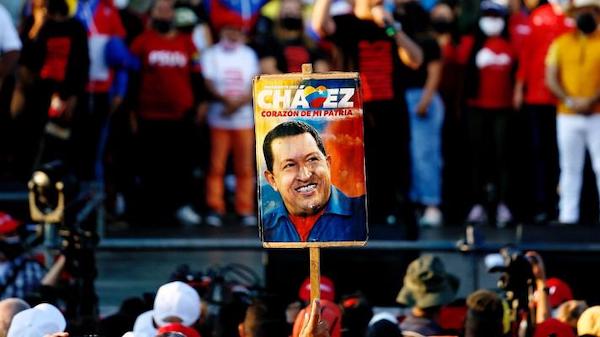 Venezuelans raise a photo of the late President Hugo Chávez, who was the original pioneer of the ideal of Latin American regional integration. (Photo: Hernán Cano / Sputnik)

A spectre is haunting Latin America: the ideas of Hugo Chávez. A “new progressivism” is adopting them as their banner and claiming them as their own, thus invisibilizing Venezuela’s role in attempts at promoting regional integration and sovereignty over the last two decades.

We can witness this in the current speeches of Lula da Silva, who was a protagonist of the “first progressive wave” in the 2000s along with the presidents of Venezuela (Hugo Chávez), Argentina (Néstor Kirchner) and Bolivia (Evo Morales). Perhaps the Brazilian leader could bear witness to the attempts at integration mainly embodied by Chávez, but he did not provide the necessary impetus for the Bolivarian Alliance for the Peoples of Our America–Peoples’ Trade Agreement (ALBA-TCP) to take a definitive course towards consolidation.

In December 2007, the necessary documents were signed to establish the Banco del Sur [Bank of the South], and in January 2008 the ALBA Bank. Both were to serve as financing vehicles for development, especially the former, in the spirit of integration among the signatory countries, but all that remained was the formation of customs treaties.

Brazil, despite being the largest economy in the region, did not contribute the necessary capital to the Banco del Sur, which was to start with $7 billion, setting itself up as an alternative to the International Monetary Fund (IMF), the World Bank (WB), the Inter-American Development Bank (IDB), the Andean Development Corporation (CAF) and the Fund for the Cuenca del Plata (Fonplata).

Since Brazil had its own development bank, the BNDES, it refrained from giving further impetus to the Banco del Sur.

For the Banco del Sur, each country was to contribute according to its financial capacity and relative development, while all partners of the regional financial entity would have equal voting and veto power. It was a policy of consensus between Argentina, Bolivia, Brazil, Ecuador, Paraguay, Uruguay and Venezuela.

This was an idea strongly promoted by Hugo Chávez, which now Lula, in the framework of his electoral campaign to win the Brazilian presidency, is once again raising to evade the toxic hegemony of the dollar and its financial emissaries, and other representatives of that “first wave” are backing him, although those representatives may no longer participate in official politics.

Moreover, the leader of the Workers’ Party (PT) of Brazil is promoting the idea of creating a single currency in Latin America, one that resembles the SUCRE.

SUCRE, abbreviation for Sistema Unitario de Compensación Regional [Unitary System of Regional Compensation], is an initiative that serves as a unit of account and value, which was intended to replace the U.S. dollar in commercial transactions in the Latin America and the Caribbean, as well as in productive sectors.

The mechanism is similar to that of the euro in the European Union. Brazil, however, never participated in that monetary integration project.

Now, Lula wants to make the project of a single regional currency a reality, but under his own umbrella, discarding what has already been built by ALBA-TCP, that is, by Cuba, Nicaragua and Venezuela.

Similarly, the Brazilian presidential candidate has spoken of creating a South American Defence Council, without giving more explanation. This is another initiative that was already launched by Chávez himself through the founding of the Union of South American Nations (UNASUR).

The idea was to create a South American Defence Council that would implement a unitary agreement on regional security cooperation, expanding the wings of multilateralism and promoting the fight against drug trafficking and illegal fishing, while developing treaties for greater control of the territorial sea of the member countries and incentivising the industrial exchange of defense equipment and technology among the members of UNASUR.

Furthermore, this institution had all the foundations to build true financial integration uniting the 12 founding countries (today only four remain), including a project for a single currency that would replace national currencies, constituted by the Banco del Sur itself.

Perhaps Lula intends, together with the new Latin American progressives, who have moved away from the Cuba-Nicaragua-Venezuela triad, to establish a new UNASUR, another Banco del Sur under a new name, and a regional currency that discards the original foundations of the SUCRE.

The President of Chile, Gabriel Boric, already declared last March that UNASUR and the “series of acronyms that you know,” referring to ALBA-TCP and CELAC, “have shown that they do not serve to unite us or to advance integration,” calling for the creation of new institutions for regional integration.

The Colombian presidential candidate, Gustavo Petro, also approves the proposals of Boric, and Lula as well.

There is a reluctance on the part of this new variant of progressivism to adopt the institutions created under the guiding impulse of Chavismo, although the source of the ideas is Hugo Chávez and Venezuela. It is a fallacy to claim, as Boric does, that CELAC, UNASUR and ALBA-TCP are based on political and ideological affinities and inclinations, as heads of state as vastly different as those of Colombia, Peru and Bolivia, for example, agreed on the development of these regional cooperation initiatives and integration platforms.

Specifically, the driving force behind these essentially Bolivarian ideas has a strong statist component, as they are not subordinated to the logic of particular governments and the agenda of the day. Rather, on the contrary, they constitute a necessity: that of moving away from the unipolar dominance of the United States, to build a common regional identity and to insert continental integration into a rising multipolar dynamic, with its own voice.

Is it not all this that those who wish to create new institutions want?

However, it seems that the spectre of Hugo Chávez’s ideas and initiatives, from their cradle in Venezuelan, haunts them in an unusual way. Thus, the right wing of the continent is not the only one that feels this way.