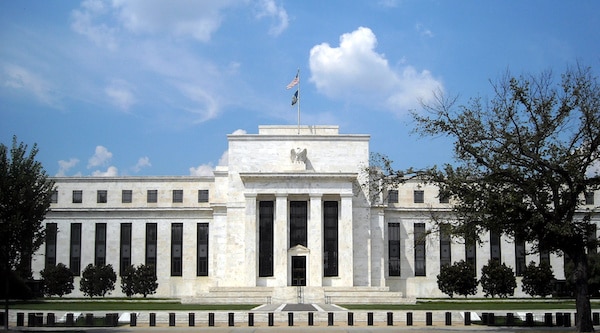 Central banks all over the capitalist world are raising, or are about to raise, interest rates as a means of countering the currently rampant inflation, which is certain to push a world economy that is barely recovering from the effect of the pandemic, back towards stagnation and greater unemployment.

Of course the Federal Reserve Board of the U.S. which sets the standard in this respect for all other central banks, claims otherwise. It argues that the rise in interest rate it is decreeing will have little impact, or at the most a transitory impact, on the real economy; the recovery will be largely unimpaired. But this is based on reasoning which is fundamentally flawed and goes as follows.

The current inflation in the U.S., Fed chairman Jerome Powell argues, is because of a money wage push, which in turn arises because people are expecting inflation to occur; the rise in interest rate, by making people expect an abatement of inflation, will end this money-wage push, and hence actually bring down inflation. Since all adjustments will thus remain confined to the sphere of expected prices, and hence by that route to the sphere of actual prices, the real economy of output and employment will hardly face any recession. This entire argument however is wrong because of one simple fact: the workers’ money wages have lagged behind inflation, because of which they have suffered real wage declines. Hence to argue that inflation in the U.S. is because of a money-wage push, is a gross error.

Likewise the other common explanation given for inflation is that the Russo-Ukraine war has created scarcities of various commodities, especially of oil and food-grains in the world market. This explanation too however is unconvincing: while the war may cause such scarcity, there has as yet been no such scarcity. In fact there is little evidence of any decline in supplies of such commodities in the world market due to the war; hence to attribute the inflation to such war-induced scarcity is erroneous, certainly in the context of the U.S..

The reason why there is inflation in the U.S. is because prices are rising faster than wages owing to an autonomous rise in profit-margins. Profit-margins are supposed to rise when there is a scarcity of some commodities, but in the present case there is no shortage of a range of commodities that are witnessing inflationary pressures; and even in the case of commodities where there may be immediate shortages because of supply-chain disruptions on account of the pandemic, the rise in price is more pronounced and persistent than warranted. There is in other words an autonomous profit-margin push underlying the current inflation in the U.S. which is indicative of speculative behaviour.

There is a tendency to think of speculative behaviour as characterising only traders and middlemen but not manufacturers; but this has no basis. Speculation underlies pricing behaviour of multinational corporations too, and the reason why speculation-induced inflation is afflicting the world’s largest economy, is because of the easy availability of credit as a result of the extraordinarily easy monetary policy pursued until now. “Quantitative easing”, namely pushing money into the U.S. economy by the Federal Reserve and its maintenance of near-zero short-term and long-term interest rates, has created a liquidity overhang in that economy that has been conducive to an autonomous profit-margin push, and is manifesting itself in the form of inflation even before production has reached anywhere near full capacity. Further, against the inflation caused by this history of monetary policy, the only measures available are either “fiscal austerity” or a rise in interest rates (as is occurring now), both of which cause recession and unemployment.

Here we come to the nub of the problem. The economic arrangement under contemporary capitalism is such that to beat down the fall-out of the behaviour of a handful of speculators in the U.S., mass unemployment has to be generated not only in the U.S. economy (which is absurd enough in itself) but in the entire world economy. This last point arises because under neo-liberalism with global cross-border mobility of capital, especially of finance, the array of interest rates all over the world must move up when the U.S. interest rate moves up (for otherwise finance will keep flowing out of peripheral economies into the U.S. causing a continuous depreciation of the former’s exchange rates vis-à-vis the dollar). Speculation in the U.S. in other words, instead of being directly tackled through other means, is tackled, under a regime of financial “liberalisation”, through the generation of mass unemployment all over the world. This is the acme of irrationality.

John Maynard Keynes, writing under the shadow of the Bolshevik revolution and in the midst of the Great Depression, was acutely aware of this irrationality. To save the system which was his goal, he wanted what he called the “socialisation of investment”. For this fiscal intervention by the State was essential as was an appropriate monetary policy, both of which required the subservience of financial interests to the needs of society as a whole.

In this intellectual ambience, many newly-liberated third world countries after the war erected innovative financial structures that directly curbed speculation without causing any reduction in activity, let alone mass unemployment. In India for instance long-term finance for investment was provided by a whole range of specialised financial institutions at interest rates that were generally lower than the rates on short-term credit given out by banks. A range of instruments was also used by the banks, to curb speculation other than merely the interest rate (and traditional instruments like the reserve ratio). One such was the direct restriction of credit-flows to specific, speculation-hit, sectors or what was called “selective credit controls”. Inflation control was effected not only through fiscal and monetary policies but also through “supply management” and putting in place a system of public distribution and rationing. All these ensured that investment, output and employment were largely insulated from the behaviour of speculators.

The Bretton Woods institutions and its loyal neo-liberal economists were staunchly critical of all these arrangements. They called such financial arrangements “financial repression” and wanted instead a “liberalisation” of the financial system where all such direct interventions in financial markets were eschewed. They even wanted a jettisoning of public distribution and rationing that still continues in the case of foodgrains, and got the Modi government to pass the three infamous farm laws towards this end. Though they did not succeed in their endeavour to jettison public distribution and rationing, they did enforce “financial liberalisation” as part of the neo-liberal “reforms”.

“Financial liberalisation” virtually meant an exclusive reliance on the interest rate as an instrument of monetary policy, and even here since the interest rate in a world of relatively easy financial flows is linked to the U.S. rate (as noted earlier), the country did not have much leeway. And since “fiscal responsibility” meant that government spending got linked to government revenue and government revenue itself could not be raised through heavier taxes on the rich (for they would then look elsewhere for locating their investment projects), the same interest rate that was used for inflation control was also a key determinant of investment, output, employment and growth.

The eminent economist Dr KN Raj had once lauded the financial system we had under the dirigiste era on the grounds that it did not allow the whims of a handful of speculators to determine the employment prospects of millions of workers. Financial liberalisation destroyed precisely this insulation; and, what is more, it linked every country’s level of employment to the whims of a few American speculators.