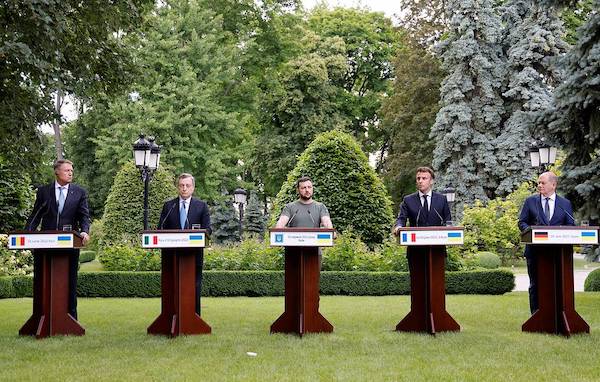 Henry Kissinger predicted some three weeks ago that the Ukraine war was dangerously close to becoming a war against Russia. That was a prescient remark. The NATO Secretary-General Jens Stoltenberg in a weekend interview told Germany’s Bild am Sonntag newspaper that in the alliance’s estimation, the Ukraine war could wage for years.

“We must prepare for the fact that it could take years. We must not let up in supporting Ukraine. Even if the costs are high, not only for military support, also because of rising energy and food prices,” Stoltenberg said. He added that the supply of state-of-the-art weaponry to Ukrainian troops would increase the chance of liberating the Donbass region from Russian control.

The remark signifies a deeper NATO involvement in the war based on the belief not only that Russia can be defeated in Ukraine (“erase Russia”) but the cost shouldn’t matter. The NATO chiefs traditionally take the cue from Washington, and Stoltenberg was speaking just a fortnight before the alliance’s Madrid summit.

Curiously, UK Prime Minister Boris Johnson in an op-ed for London’s Sunday Times after a surprise visit to Kiev on Friday virtually complemented Stoltenberg’s words, stressing the need to avoid “Ukraine fatigue.” Johnson noted that with Russian forces gaining ground “inch by inch” it was vital for Ukraine’s friends to demonstrate their long-term support, which meant ensuring “Ukraine receives weapons, equipment, ammunition and training more rapidly than the invader”.

Johnson outlined “four vital steps to recruit time to Ukraine’s cause.” First, he said, “we must ensure that Ukraine receives weapons, equipment, ammunition and training more rapidly than the invader, and build up its capacity to use our help.” Second, “we must help preserve the viability of the Ukrainian state.”

Third, “We need a long-term effort to develop the alternative overland routes” for Ukraine so that its economy “continues to function.” Fourth, crucially, the Russian blockade of Odessa and other Ukrainian ports must be lifted and “we will keep supplying the weapons needed to protect them.”

Johnson admitted that all this requires “a determined effort … lasting for months and years.” But the imperative to strengthen President Zelensky’s capacity to wage the war is also vital for “protecting our own security as much as Ukraine’s.” Stoltenberg and Johnson spoke up after the EU executive recommended that Ukraine should be officially recognised as a candidate to join the bloc (which is expected to be endorsed at a summit set for June 23-24.)

Meanwhile, Russian forces are steadily marking tactical successes in the region of Donbass and in the stabilisation of the frontline in other sectors. The most intense fighting is ongoing in the Severodonetsk-Lysichansk area and around Slavyansk, but the situation is also tense in the Kharkiv region and in Mykolaiv and Kherson Regions in the south.

The Russian forces are pounding the military infrastructure and equipment gatherings of Ukrainian forces. As per Russian MOD, in the five-day period between June 13-17 alone, according to the Russian version, it appears that 1800 Ukrainian soldiers have been killed and 291 pieces of military equipment and 69 objects of military infrastructure were destroyed.

A defeat in Donbass will be catastrophic for Zelensky, as the destruction of its best military units deployed there virtually leaves the southern regions as low-hanging fruit for Russian forces. For NATO too, its international standing will be seriously eroded. On Friday, two U.S. war veterans detained on Donetsk frontline were put on display on Russian TV appealing to their families for help. More such visuals can be expected in the coming days.

Johnson wrote alarmingly that the Putin Doctrine arrogates to Russia an eternal right to “take back” any territory ever inhabited by Slavs and this “would permit the conquest of vast expanses of Europe, including Nato allies.” This is hyperbole. To take their eastern and southern territories back, the Ukrainians will indeed have to wage a long war but they also will critically depend on enormous military, financial and economic assistance from Europe. On the other hand, European unity is fragile and there is “fatigue” setting in.

There is no coherent vision about the ultimate NATO objective, either. Ukraine is a black hole unworthy of a Marshall Plan. Unsurprisingly, there is great circumspection on the part of Germany to waste its resources over Ukraine.

Finally, the deepening economic crisis in the West–high inflation and cost of living and growing likelihood of recession–is at the gates like wolves howling in a winter wonderland. The European public no longer becomes sentimental at the sight of Ukrainian refugees. The alibi that Putin is responsible for all this won’t fly.

Fundamentally, the Western economies are facing a systemic crisis. The complacency that the reserve-currency-based U.S. economy is impervious to ballooning debt; that the petrodollar system compels the entire world to purchase dollars to finance their needs; that the flood of cheap Chinese consumer goods and cheap energy from Russia and Gulf States would keep inflation at bay; that interest rate hikes will cure structural inflation; and, above all, that the consequences of taking a trade-war hammer to a complex network system in the world economy can be managed–these notions stand exposed.

When the money printing presses whirred in Europe and America, no one felt uneasy about the structural flaws in the system. In a haze of ideological bluster, the Biden Administration and its junior partner in Brussels didn’t pay any due diligence before sanctioning Russia and its energy and resources. Europe is much worse off than America. Inflation in Europe is well into double digits. A European sovereign debt crisis may already have begun.

The accelerating inflationary crisis threatens the standing of western politicians, as they will encounter real popular anger once inflation eats away at the middle class and high energy prices gut business profits.

How to arrest the unfolding slow burn political debacle for both Europe and the U.S.? The logical way is to force Zelensky to go to the negotiating table and discuss a settlement. The narrative of continuing the attrition against Russian forces for the coming months, to inflict hurt on Russia, does not help European politicians. Mariupol, Kherson and Zaporizhzhia have fallen. Donbass might also, soon. What’s the next red line? Odessa?

Paradoxically, the long war in Ukraine could only work to Russia’s advantage. President Putin’s speech at the SPIEF at St. Petersburg on Friday shows how thoroughly Moscow studied the western financial and economic system and identified its structural contradictions. Putin is adept at using the weight and strength of his opponents to his own advantage rather than opposing blow directly to blow. The West’s overextension can ultimately be its undoing.

That’s where the actual inflection point lies today–whether the structural contradictions in the western economies have matured into disorder. Putin sees the West’s future as bleak, hit simultaneously by the blowback from its own imposition of sanctions, and the resultant spike in commodity prices, but lacking agility to deflect the blows due to institutional rigidities.

The big question today is at what point Russia retaliates against the countries who are involved in the gun-running business in Ukraine if they accelerate on that path. The air strikes by Russian jets last Thursday on the militant terror groups harboured in the U.S. garrison at Al-Tanf on the Syrian-Iraqi border may well have carried a message.