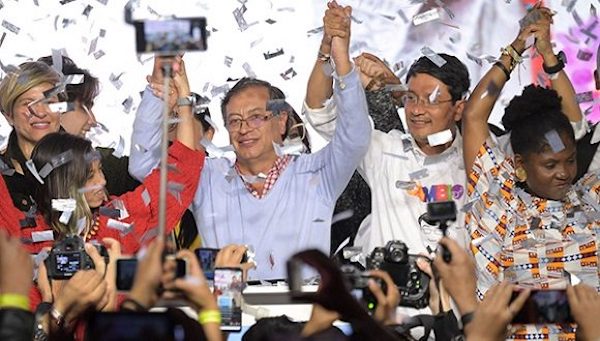 On June 19, 2022, long lines brought 39 million Colombian (out of a population of 51 million) to vote in their presidential election. In rural areas, where the vote is often suppressed due to desolation or violence, the lines seemed longest. People took great risks–against threats from paramilitary groups and narco-mafias–to stand in these queues and choose between two very different political projects: an old project that favoured the old hierarchies that have ruled Colombia since the 19th century, and a new project that favours the development of democracy and social equality. It was a nail-biting election, the direction of the vote only clear toward the end of the day: the people, by a clear margin, chose a new path for Colombia, rejecting the old oligarchy and its way of economic and political violence.

The new path was paved by struggles that go back more than sixty years. The candidates that won the election–President Gustavo Petro and Vice President Francia Márquez–both came from the heart of these struggles, from left movements and social movements, from the obstinate fight of ordinary people to build lives that were not merely surrendered to the wealthy and powerful old colonial elites and the new narco-elites. They assembled the main organisations of these struggles into the Pacto Histórico por Colombia (Historical Pact for Colombia), which was their electoral platform.

Petro was a member of the M-19 guerrilla in his youth and remains firm about his left-wing views; it is the first time in the history of the republican Colombia that a candidate of the left has won the presidency. Márquez’s victory into the vice presidency is perhaps more spectacular: it is the first time an Afro-Colombian woman who comes from a peasant community has attained this post, the first time–indeed–that any Afro-Colombian has won high office in the country. These origins and the politics that Petro and Márquez have adopted are not to be easily dismissed; they will shape the government that now governs a country that has been a fierce bulwark of reaction and a base of U.S. imperialism in South America.

Details of the voting patterns are important to digest. In the two poorest municipalities in the country–El Chocó and La Guajira–the Historical Pact won 83% and 66% respectively. El Chocó is in western Colombia, where 82.1% of the population identify as Afro-Colombian. Half of the population of La Guajira–in the northeast of Colombia–identify as indigenous. Those who had been marginalised came out in large numbers to vote for Petro and Márquez. During the campaign, in Colombia’s capital of Bogotá, Márquez said, ‘They told us that politics was not for us. They said that our place as Black women was as domestic workers, to make their houses beautiful, to raise their children, to come back to bury our own. These chains of oppression must be broken’. That message was heard clearly in the margins of Colombia.

That the Historical Pact won at the margins did not mean that they did not win Bogotá, where Petro had been the mayor (from 2012 to 2015), nor did it mean that they did not win several major cities. It is, however, instructive that they lost in two parts of the country that tell their own story. First, Petro-Márquez lost in the department of Antioquia, whose capital Medellin is a well-known capital of paramilitarism. Threats and violence from the para-militaries did overcome some regions, but these threats were not able to dictate the terms of the election. The second area where Petro-Márquez lost was in the borderlands of Colombia near Venezuela, where the right-wing and the paramilitaries have conducted a vicious, violent campaign against the Left, using Venezuela as a bogeyman. The geography of the electoral map shows that the main adversaries of the Petro-Márquez ticket, apart from sections of the most reactionary oligarchy, came from the paramilitaries, whose power remains and who represent a clear and present danger to the incoming government. They are the definitive enemy of the Colombian people.

Colombia has experienced an upsurge of protests since 2019 that have brought together a range of political forces. The strikes of 2019 brought together trade unions, peace organisations, peasant groups, indigenous platforms, Afro-Colombian groups, and social movements. The themes of the protest were various: oscillating from protests against social and economic inequality to protests in defence of the Colombian peace process (2012 to 2016), from outrage at police brutality to anger at the proposed austerity programme of President Iván Duque. The agreements made in the aftermath of the protests were not kept, and with the chaos of Duque’s reaction to the pandemic, the opened up a new cycle of protests in 2021. The new issues, mirroring the older ones, were about increased taxes, an assault on the health care system, and an end to pandemic relief. The tension in Colombia was very high.

It was in this context that the Historical Pact assembled twenty political and social organisations into an electoral platform. This Pact included the party of Gustavo Petro (Colombia Humana) and the political party of the former guerrilla of the FARC-EP (Comunes), as well as the Communist Party and the centre left Todos Somos Colombia. The long lines of the indigenous Colombians for this election echoed the long lines of the massive march that brought them to Bogotá in 2019 and again in 2020; Duque refused to meet them, so they marched to the voting booth to vote for Petro and Márquez. These marches emerged out of a process that begins in 2008, when the term Minga (a word of Quechua origin) is used to describe collective efforts for the collective good. Founded in 2010, the Congreso de los Pueblos secured its place as a major leader of the great agrarian strikes in 2013, 2014, and 2016 and then brought this rural capacity into the largely urban cycle of protests from 2019 to the present. Having organisations such as the Minga and Congreso alongside the relatively mainstream centre-left political parties allowed Petro and Márquez to build the kind of broad front needed to win more than half of the popular vote in the second round of the election.

It helped that in the first round the major political parties of the oligarchy were wiped out, defeated by the Historical Pact and by a right-wing phenomenon seen across South America, that of a kind of Trump-like, hideous figure of bigotry and toxicity. Rodolfo Hernández was not entirely an outsider, since he was the mayor of Bucaramanga from 2016 to 2019; but he nonetheless ran his campaign with a kind of callousness that drew in parts of the Colombian public who were fed up with the old ways of politics. The oligarchy and the narco-mafias were compelled to line-up behind Hernández, but–without massive fraud–there was little hope for his campaign in the last days.

In his first speech after the election, Petro defined his campaign as ‘the sum-up of resistance, of rebellion against injustice, discrimination, and inequality’. He paid tribute to the sacrifices of generations of Colombians, that culminated in the wave of police brutality in the last few years. “How many are not with us today’, he said. ‘Tens of thousands, disappeared, jailed, handcuffed, mistreated, simply because they had hope. I request the Procurator’s Office to release our youth’.

Glimmers of discontent came immediately from the United States. Florida’s governor Ron DeSantis said, ‘The results of that election have been very, very troubling for people that believe in freedom in the Western Hemisphere. To elect a former narco-terrorist and a Marxist to lead Colombia is going to be disastrous. That is the attitude of a senior U.S. government official towards a democratic election in the American hemisphere.

DeSantis and the U.S. administration have a good reason to fear a cascade of left victories across Latin America. The mood has shifted. When U.S. President Joe Biden held a Summit of the Americas in Los Angeles, countries such as Bolivia, Honduras, and Mexico declined to come because Biden would not invite Cuba, Nicaragua, and Venezuela. Petro has said that he would open relations with Venezuela, a key development since Colombia had been used by the United States in its pressure campaign and its sabotage operations against the Venezuelan people.

At the victory rally, Petro’s daughter–Sofía–wore a t-shirt with an image of the Brazilian socialist Marielle Franco who was assassinated in 2018. There was a message here to the hemisphere. Brazil’s people go to the polls in October, and in that election, the left’s Lula is predicted to win against the right-wing’s Jair Bolsonaro in the first round.

In 1990, Carlos Pizarro–a member of Petro’s M-19 guerrilla force–ran for the president during a moment of peace in Colombia. He was assassinated during the campaign. His daughter, María José, is now a senator and is part of the Historical Pact. As she went to vote for Petro and Márquez, María José Pizarro said, ‘Dad, today I vote for you. I vote in tribute to the peace you dreamed of for Colombia. I vote for my daughters and all this land’s children. I vote for us, the nation’s women. I vote for the dream that Gustavo Petro called us to build’. That dream now goes from the impoverished town of Yolombó, where Márquez was born, to the southernmost town of Leticia, deep in the Amazon.

Taroa Zúñiga Silva is a writing fellow and the Spanish media coordinator for Globetrotter. She is the co-editor with Giordana García Sojo of Venezuela, Vórtice de la Guerra del Siglo XXI (2020) and is a member of the Secretaría de Mujeres Inmigrantes en Chile. She also is a member of the Mecha Cooperativa, a project of the Ejército Comunicacional de Liberación.