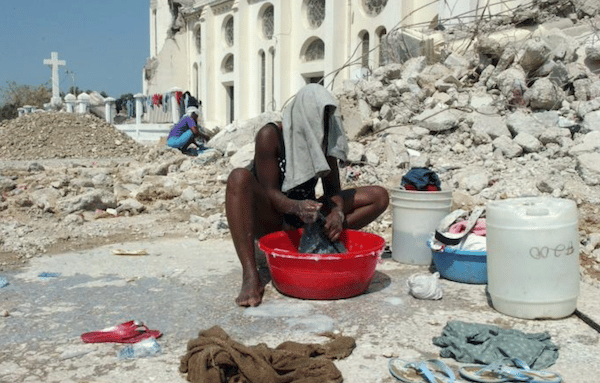 It took Haiti 122 years to pay off its debt of independence, a neocolonial strategy that remains in place and leads to chronic underdevelopment. (Photo: Juvenal Balán)

Haiti was the first free nation in Latin America and the Caribbean, the first nation in the modern world emerging from a slave revolt, and the second most long-standing republic in the Western Hemisphere. The Haitian people overthrew the French colonialists in 1804, abolished slavery, and declared independence.

Their revolution was worse nightmare of colonial powers with possessions in the Caribbean – the ghost of Saint-Domingue disturbed the sleep of slave holders for years.

The imperial powers imposed a rigorous cultural, economic and political blockade on the new Haiti, to prevent the extension of its example.

Two decades after independence was proclaimed, in 1825, French warships returned, blockaded the young nation and issued an ultimatum: pay compensation or prepare for war.

According to the colonial empire, the young nation was obliged to compensate French planters for the property and slaves they had lost.

On April 17, 1825, Haitian President Jean-Pierre Boyer signed the Royal Decree presented by Charles X, who promised French diplomatic recognition in exchange for a 50% reduction of tariffs on French imports and the outrageous compensation.

For Haiti the figure was impossible to pay, given the conditions of its economy, ravaged by the French naval blockade and a devastating war, but the “generous” colonialists made a proposal “they couldn’t turn down.”

A group of French banks offered Haiti a loan to cover the compensation, resulting in a double debt that, along with the interest, bled the small country to death, over the course of the 122 years required to pay off its “independence debt.”

What’s more, The New York Times recounts in a recent five-part series of articles, when the U.S. army invaded Haiti in the summer of 1915, a group of Marines entered the national bank and stole some 500,000 dollars in gold, that days later made its way to a Wall Street bank vault.

The United States, using the financial and political chaos the island was experiencing as a pretext, occupied the country militarily, continuing its longstanding policy in the region.

Haiti was to be governed by a U.S. military proconsul.

For more than ten years, a quarter of all Haitian income went to pay off debts to the National City Bank, incurred by the country to cover the expense of “assistance from the U.S. government,” according to The Times.

ANOTHER ISLAND DARES TO CHALLENGE THE EMPIRE

In January 1959, another small Caribbean island, Cuba, defying U.S. imperial power, declared itself the first free territory of the Americas and dared to announce its decision to build the first socialist nation in the hemisphere.

The “crime of insubordination” committed required immediate action by the “superpower.” Since then, all variants of war have been waged against the rebel island, including the economic, without success.

As an essential part of the plan to break the soul and subsequent extermination of the Cuban people, a monstrosity known as the Law for Cuban Democratic Freedom and Solidarity was concocted.

What similarities can be seen between this legal atrocity and the one foisted on Haiti by the French empire? Let’s skip some frightening sections of the Helms-Burton Act, as it is also known, and consider the plan it envisions.

Let’s imagine two hypothetical scenarios, totally impossible for those of us who have confidence in the capacity for resistance and courage of our people.

First: The imperialist enemy and his allies, making use of their military power, would manage to occupy most of the country and establish a transitional government, after proclaiming the end of the Revolution.

Second: Division, deception, and discouragement sown by the enemy would lead to betrayal, another Baraguá, and we would “let the sword fall,” as in 1878.

Would we then have “free and democratic” elections? No, the transitional government, handpicked by the occupying forces, would not call elections until the United States Congress approved such a move.

The U.S. President or his proconsul, appointed for this purpose, would prepare a report to Congress every six months outlining progress being made in the transition process on the occupied island.

How long would this process supposedly last, if they are requiring a report every six months? How long would Yankee troops remain in Cuba?

The answer to both questions is “Who knows?” (Reading the Bush Plan is recommended.)

Finally, after who knows how many years, the U.S. Congress would approve elections. What about the economic, commercial and financial blockade? Would it be lifted when the end of the Revolution was proclaimed?

No, this is not part of the plan; the blockade is to remain intact during the transition, as an ironclad mechanism to apply pressure.
Once the elections were held in U.S. occupied Cuba, with the Revolution removed from power, we would have a president and government, in the style of the imperialists and to their liking.

Insistent questions remain: Would the blockade be lifted? Would the economic war end? The answer is no, that’s not what the Helms Burton proposes.

The new Cuban “president” would verify to Congress that all U.S. citizens who were “former owners” had been compensated with the full value of all properties nationalized or confiscated in accordance with revolutionary laws and in line with international law, including those Cubans who, after 1959, became “Cuban-Americans.”

The “indemnity” or “compensation,” according to U.S. experts in 1997, would have an approximate value of 100 billion dollars.

The empire has a solution that would allow the Cuban government to pay for the legal procedures, compensation and debt: loans from U.S. banks, the IMF, etc., which would generate ever-increasing interest payments and create an endless spiral of plunder.

Cubans, like Haitians years ago, would spend decades paying off a practically impossible debt. How could a country devastated, depleted, impoverished by war and occupation, a country that had lost a good part of its population of working and productive age, afford to do so? It must be clear that they could never occupy our island, without defeating a

Cuban people determined to defend every inch of our homeland.

We would be left in the hands of our hangmen, ready and willing to drain every last drop of our national wealth.

Thomas Piketty, one of the economists consulted by The New York Times, in his work on Haiti, referred to this policy as “neo-colonialism by debt.”

The “crime of insubordination” is the greatest “sin” that a people can commit. Empires never forgive rebels. An insubordinate rebel plants a seed that can sprout many generations later.

The Haitian Revolution was a breeding ground of revolutions. The punishment, the viciousness of the colonial master, could not erase its example. Inspired, Our America rose up to fight for its independence, again and again, as tireless as the courageous Haitians who defeated Napoleon’s best generals, in the first years of the19th century.