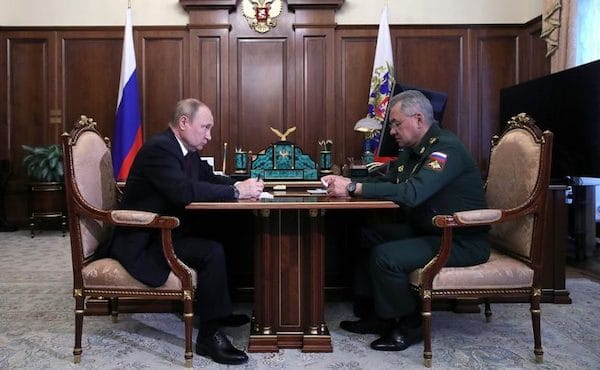 On July 1 at the White House, U.S. President Joe Biden made a startling disclosure that “the idea we’re going to be able to click a switch, bring down the cost of gasoline, is not likely in the near term.”

American gas exporters have positioned themselves accordingly to fill the gap as Europe turns away from Russian imports. FT reported recently that “U.S. liquefied natural gas producers have announced a string of deals to boost exports as the industry capitalises on shortages that have left Europe with a mounting energy crisis.”

The deals are so lucrative that Cheniere, America’s leading gas exporter, has taken an investment decision to push ahead with a project that will boost its capacity more than 20 per cent by late 2025, anticipating long-term supply deals and locked in purchases of U.S. gas over the coming decades. The U.S. producers of gas are reportedly running plants flat-out to increase supplies to the EU.

The U.S. has overtaken Russia for the first time as Europe’s top gas supplier. Although LNG from the U.S. is sold to Europe at much higher costs than pipeline gas from Russia, EU countries have no choice.

With Russian supply via Nord Stream at just 40% of capacity, and deliveries to be halted completely for annual maintenance on July 11-21, the outlook for near-term Russian gas supply to Europe appears bleak.

Germany has warned of the risk that Nord Stream gas may not return at all following the maintenance. At any rate, Russian supply to Europe is at record lows and is “set to remain constrained through the third quarter,” per S&P Global.

Germany is heading for a major economic crisis. The head of the German Federation of Trade Unions has been quoted as saying in the weekend, “Entire industries are in danger of collapsing forever because of the gas bottlenecks–especially, chemicals, glass-making, and aluminium industries, which are major suppliers to key automotive sector.” Massive unemployment is likely. When Germany sneezes, of course, Europe catches cold–not only the Eurozone but even post-Brexit Britain.

Welcome to the European Union’s “sanctions from hell.” The U.S. literally hustled the Europeans into the Ukraine crisis. How many times did Secretary of State Antony Blinken travel to Europe in those critical months in the run-up to the Russian invasion of Ukraine to ensure that the door to any meaningful talks with the Kremlin remained shut! And American energy companies are today making windfall profits selling gas to Europeans. Won’t Europeans have the common intelligence to realise they have been had?

Now, Biden has washed his hands off the gas crisis. He brusquely stated at a press conference in Madrid on June 30 that such premium on oil prices will continue “as long as it takes, so Russia cannot, in fact, defeat Ukraine and move beyond Ukraine. This is a critical, critical position for the world. Here we are. Why do we have NATO?”

Biden’s counterfactual narrative is that the sanctions against Russia are going to work eventually and a long war in Ukraine would be Russia’s undoing. The U.S. narrative is that if you look under the hood of the Russian economy, it may not be flexible and resourceful enough to develop an entrepreneurial bunker spirit and adopt new business models to neutralise the sanctions. Biden is convinced that Russian economy is in the grip of industrial mafias that are not very innovative and, therefore, there aren’t many options for Russia under the western sanctions.

Look at the impact that the war on Ukraine has had on Russia… They’ve (Russians) lost 15 years of the gains they made in terms of their economy…  They can’t even–you know, they’re having–they’re going to have trouble maintaining oil production because they don’t have the technology to do it. They need American technology. And they’re also in a simi-–similar situation in terms of their weapons systems and some of their military systems. So they’re paying a very, very heavy price for this.

But even if that’s the case, how does all that help the Europeans? On the other hand, President Putin’s strategic calculations with respect to the war remain very much on track. Russian forces made indisputable progress in establishing full control over Luhansk. On Monday, Putin gave the green signal to a proposal from the army commanders to launch “offensive operations.” Five months into the war, Ukrainians are staring at defeat and Russian army generals know it.

Russia didn’t wander into Ukraine unprepared, either. Evidently, it took precautionary steps both before and since the war to shield its economy. And this enables the Russian economy to settle down to a “new normal”. Washington’s options are quite limited under the circumstances. Fundamentally, western sanctions do not address the causes of the Russian behaviour, and therefore, they are doomed to fail to solve the problem at hand.

To be sure, Putin has some nasty surprises in store for Biden closer to the November mid-term elections. Biden blithely assumes that he controls all the variables in the situation. Schadenfreude is never a rational basis for statecraft.

The pathway of Russia’s offensive operations is being relaid to include Kharkov and Odessa as well, apart from Donbass. The influential Kremlin politician and chairman of Duma Vyacheslav Volodin said on Tuesday,

Some people are asking what our goal is and when all this will end. It will end when our peaceful cities and towns no longer come under shelling attacks. What they are doing is forcing our troops not to stop on the borders of the Lugansk and Donetsk republics (Donbass) because strikes (on Russian regions) are coming from the Kharkov regions and other regions of Ukraine.

How long does Biden think the Europeans will want to be involved in a protracted proxy war with Russia? Bild reported on Sunday that 75% of German respondents see recent price hikes as a heavy burden, while 50% said they feel their economic conditions are worsening; every second German fears a lack of heating this coming winter due to reduced Russian gas supplies and rising inflation in the European Union. 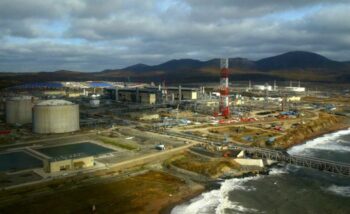 An aerial view of the liquefaction plant, part of the Sakhalin-2 liquefied natural gas project in Sakhalin, Russia, described as one of the world’s largest integrated oil & gas project.

Analysts at JP Morgan Chase, the U.S. investment bank, said last week that Russia could also cause “stratospheric” oil price increases if it used output cuts to retaliate. It said, “The tightness of the global oil market is on Russia’s side.” Analysts wrote that prices could more than triple to $380 a barrel if Russia cut production by 5m barrels a day.

Putin’s decree last week is ominous–the Kremlin taking full control of the Sakhalin-2 oil and gas project in Russia’s Far East. State-owned Gazprom held a 50% plus one share stake in the project and its foreign partners included Shell (27.5%), Mitsui (12.5%), and Mitsubishi (10%). The decree stipulates that Gazprom will keep its majority stake, but foreign investors must ask the Russian government for a stake in the newly created firm within one month or be dispossessed. The government will decide whether to approve any request.

This will unsettle energy markets further and put more strain on the LNG market, and can be seen as a move to put more pressure on the West by concurrently restricting gas supplies to Europe and creating more demand for LNG in Asia that will draw off supplies currently going to Europe. Sakhalin-2 supplies circa 4% of the global LNG market!

The only part of the U.S. agenda that is going well seems to be the unspoken part of it: the very same Anglo-American objectives that Lord Ismay once predicted as the rationale behind the NATO’s existence —”to keep the Russians out, the Americans in, and the Germans down.”