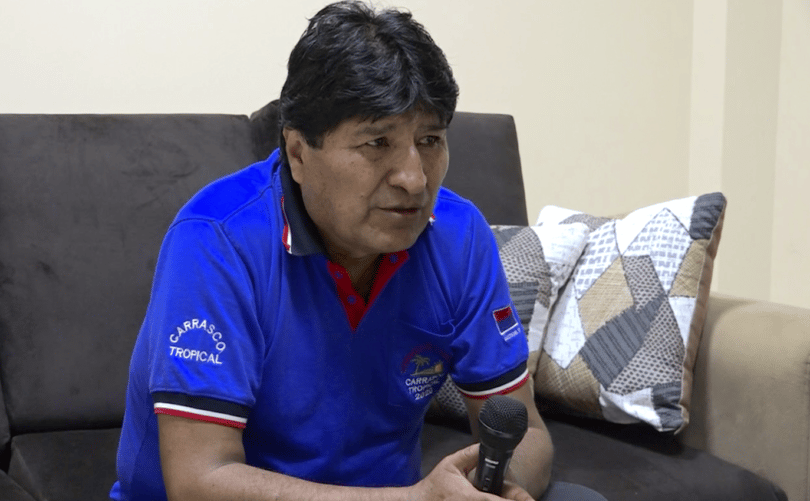 In an interview with British journalist Matt Kennard at his home in El Trópico, a small town four hours from Cochabamba in the heart of the Amazon rain forest, former Bolivian president Evo Morales (2006-2019) called for an international campaign to eliminate NATO [the North Atlantic Treaty Organization].

According to Morales, this campaign should explain to people worldwide that “NATO is—ultimately—the United States. It is not a guarantee for humanity or for life. I do not accept—in fact, I condemn—how they can exclude Russia from the UN Human Rights Council. When the U.S. has intervened in Iraq, in Libya, in so many countries in recent years, why have they not been expelled from the Human Rights Council? Why was that never questioned?”

We [in the Movimiento al Socialismo, MAS] have profound ideological differences with the politics implemented by the United States using NATO, which are based on interventionism and militarism. Between Russia and Ukraine they want to reach an agreement and [the U.S.] keeps provoking war, the U.S. military industry, which is able to live thanks to war, and they provoke wars in order to sell their weapons. That’s the other reality we live in.

Morales is one of the most successful presidents in Latin American history who closed down a U.S. military base in Bolivia, expelled the CIA and DEA, and helped reverse half a millennium of colonial history by helping Bolivia to industrialize its economy.

In November 2019, Morales was ousted in a U.S./UK-backed coup that culminated with the army’s massacre of anti-coup protesters. Morales survived an assassination attempt only because Mexico’s president, Andrés Manuel López Obrador, sent a plane to rescue him.

The beneficiary of the coup, Jeanine Áñez—a conservative Christian who lost the October 2020 election to Luis Arce of MAS—was sentenced to 10 years in prison in June after being convicted of terrorism and sedition.

Morales—who returned to Bolivia after Arce’s election in October 2020—believes that the coup was prompted by his move to nationalize Bolivia’s oil and gas reserves.

Morales told Matt Kennard that “I continue to be convinced that the empire, capitalism, imperialism, do not accept that there is an economic model that is better than neoliberalism. The coup was against our economic model… we showed that another Bolivia is possible.”

In 2021, the British Foreign Office released documents which showed that the British embassy in Bolivia had paid an Oxford-based company to optimize “exploitation” of Bolivia’s lithium deposits the month after Morales fled the country after being ousted in the coup.

The documents also showed the UK embassy in La Paz acted as “strategic partner” to Áñez’ coup regime and organized an international mining event in Bolivia four months after democracy was overthrown.

Bolivia possesses the world’s second largest reserves of lithium, a metal used to make batteries, which has been increasingly coveted due to the burgeoning electric-car industry.

Under the traditional imperial dynamic which had kept Bolivia poor, rich countries extract raw materials, send them to Europe to be made into products, and then sell them back to Third World countries like Bolivia as finished products at a mark-up.

With Bolivia’s lithium deposits, Morales was adamant this system was finished. Bolivia would not just extract the lithium; it would build the batteries too. He told Kennard that:

We started with a laboratory, obviously with international experts that we hired. Then we moved on to a pilot plant. We invested around $20 million, and now it’s working. Every year it produces about 200 tonnes of lithium carbonate, and lithium batteries, in Potosí [the capital of the Spanish empire where the Spanish had undertaken silver mining in the 17th, 18th and early 19th centuries.]

We had a plan to install 42 new [lithium] plants by 2029. It was estimated that profits would be five billion dollars. Profits! That’s when the coup came. The U.S. says China’s presence is not permitted but… having a market in China is very important. Also in Germany. The next step was with Russia, and then came the coup. Just last year, we found out that England had also participated in the coup—all for lithium.

When Kennard told Morales that the UK Foreign office had denied that a coup took place, Morales responded that this was hard to comprehend and reflected “a totally colonial mindset. They think that some countries are the property of other nations. They think God put them there, so the world belongs to the U.S. and the UK. That’s why the rebellions and the uprisings will continue.”

With the People or the Evil Empire?

Morales has great admiration for Julian Assange whose detention, he said,

represents an escalation, an intimidation so that all the crimes against humanity committed by the different governments of the United States are never revealed. So many interventions, so many invasions, so much looting.

Currently, Morales is working on building independent media in Bolivia, where he says that most of the media “belong to the empire or the right-wing.”

Optimistic about the recent victory of left-wing political forces in Peru, Chile and Colombia and Lula’s expected return to the presidency in Brazil, Morales told Kennard that,