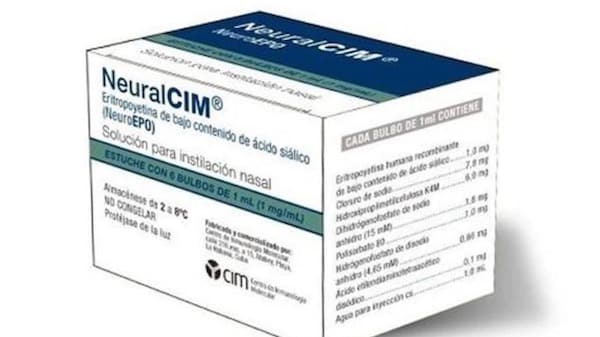 Cuba continues to make major strides in medical research and development in spite of the U.S.-imposed blockade and the challenges it poses, including in the case of the Matanzas fire. In addition to the three approved, home-grown, COVID-19 vaccines, Cuban scientists have made progress with other treatments for other diseases as well. One of them is NeuralCIM–a neuroprotective drug showing positive results among patients suffering from Alzheimer’s, Parkinson’s, and ataxia. The drug is entering advanced phases of trials where treatment of Alzheimer’s disease is concerned.

NeuralCIM is a product for nasal use, which makes it easy to administer. “What it does is prolong the life of cells of the nervous system a little more, so the symptoms are more spaced out, and the disease doesn’t progress so rapidly,” Cuban neurologist Hector Vera Cuesta told AbrilAbril.

Like many other scientists who followed the previous phases of the development of NeuralCIM, Vera believes that the results are extraordinary. If NeuralCIM was to confirm the good outcomes in the next stages, its contribution to the care of patients with Alzheimer’s disease and other forms of dementia around the world would be enormous.

Although around 55 million people around the world suffer from some form of dementia, existing therapies are few and rely on prolonged use, which can lead to discontinuation of therapy in some patients. Adding a new product to the list would offer new hope for many of them, and their caregivers.

Dr Leslie Pérez Ruiz from the Center for Molecular Immunology (CIM), one of the institutions involved in the research and development of NeuralCIM, explained that the third phase of the trial would take place in Havana, while the fourth phase would cover the whole country. Approximately 413 people will be involved in the phase conducted in Havana, and 1,456 will take part in the trial once it is expanded to other localities, said Pérez to Radio Habana Cuba.

During the third phase of the trial, additional diagnostic procedures will be carried out to confirm patients are suffering from Alzheimer’s, and not another form of dementia. In case another disease is confirmed, patients will not be included in the trial, but will be referred to specialists to receive adequate forms of care. During the trial, the effects of NeuralCIM will be compared to those of Donepezil, a dementia drug approved for use in the U.S.. One third of the participants of the trial will be receiving NeuralCIM, one third Donepezil, and one third a combination of the two, explained Leslie Pérez Ruiz.

As part of the trials, caregivers will be provided training for the administration of NeuralCIM–something that they will be expected to do once a day, every three days. All these steps are in line with the national strategy for people with dementia and Alzheimer’s that was announced earlier this year, with the aim of developing tools and resources for improving the quality of life of the 170,000 people in Cuba who suffer from different forms of dementia.

In case NeuralCIM’s trial is successful, it will once again show that the health path chosen by Cuba–based on the people’s needs and non-profit sharing with other countries–can lead to impressive advances in medical science and health care.