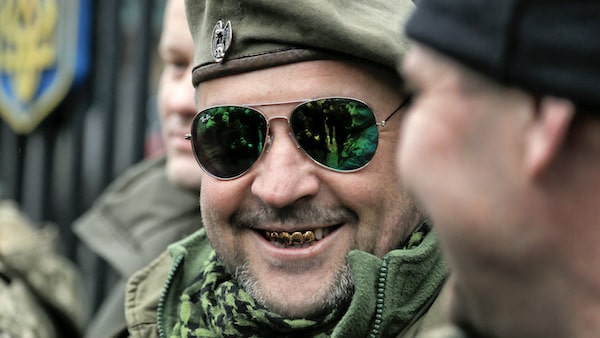 The New York Times is going full-bore for war in Ukraine. It is difficult to explain the yellow journalism, but the so-called “paper of record” did the same thing on Vietnam (see below). In other words, the Gray Lady is whoring again.

It may be, as some allege, that the NYT has never met a war it did not want to get the U.S. involved in—or, once in, to escalate. However true that may be, I still cannot figure out why—why again.

With four Ukrainian oblasts about to join Russia and a mercurial President of Ukraine, Volodymyr Zelensky, making outlandish threats to take them—and Crimea—back, perhaps the Times believes it must move decisively to make it as difficult as possible for President Biden to behave more sensibly.

The Guardian reported yesterday that “Zelensky has vowed to liberate the entire country as Russia pressed on with its supposed referendum in occupied areas of Ukraine …” Zelensky said Ukraine’s armed forces would throw the Russian forces out and retaliate against “every strike of the aggressor.” He pledged that Ukraine’s armed forces would regain control of the southern Kherson region and the eastern Donbas, which includes Luhansk province and Crimea.

Shades of Zelensky’s Feb. 24, 2021 Presidential Decree No. 117 “Approving the Strategy for de-occupation and reintegration of the temporarily occupied territory of the Autonomous Republic of Crimea and the city of Sevastopol”—which gave the major push to growing tension in and around Ukraine.

Zelensky did not explain how Ukraine was going to accomplish this, short of a U.S./NATO war with Russia. That’s the rub.

Must Biden Appear Tough Before Midterms?

The Times seems out to use the prelude to the midterms to advantage. If past is prologue, the Times wants to pre-empt Biden from doing the only sensible thing: tell Zelensky to stop the extreme rhetoric and talk to the Russians.

The Times may fear the off-chance that an adult will come into the room and persuade President Biden that:

Never having been held accountable for reporting as flat fact that there were weapons of mass destruction in Iraq and cheerleading for the U.S./UK war of aggression starting in March 2003, the New York Times seems to feel it has carte blanche to demonize Russian President Vladimir Putin, in exactly the same way it did Saddam Hussein—and Ho Chi Minh, for god’s sake, four decades earlier.

Over the weekend the Times’s reporting has been slanted to lead readers to conclude that Putin is some kind of monster with whom no one could possibly negotiate. NYT reporters and also opinion writers rely now on Ukrainian officials; then on U.S. intelligence officials. The collective performance is truly a travesty.

On Saturday, for example, opinion writer David Brooks tells us Putin is “a deeply wounded tiger.” And ( get this!): Brooks goes on to say, “This week I learned a bit about how American officials are thinking about this situation… I’m told that somewhere between 80,000 and 110,000 Russian troops have been killed or wounded in the past seven months… morale is awful… the Russians are on the defensive, or falling back.” [Reminds me of how many Viet Cong we were killing and wounding, according to earlier “American officials.]

Maureen Dowd would not be outdone on Sunday. Her NYT website piece features a photo of Putin grinding his teeth, under the title “Solo Soulless Saboteurs” (the other “saboteur” is Donald Trump). Putin is a “megalomaniacal supervillain” a “thug,” “unhinged,” and then Dowd’s closer “No one can deal with someone so inhumane.” Got that?

Dowd is careful to call Russia’s attack on Ukraine “unprovoked”—reflecting naïveté or simple dishonesty (See: “Brainwashed for War With Russia”) She does refer to Vietnam, where she acknowledges:

America has its own history of lying itself into wars in Vietnam and Iraq [she doesn’t mention how the NY Times greased the skids for both], and then prolonging the killing of young soldiers as a sop to male politicians’ egos.

The Times hailed the Tonkin Gulf resolution in 1964 as proof of “our united determination to support the cause of freedom in Southeast Asia… against the mad adventure by the North Vietnamese Communists… United States determination to assure the independence of South Vietnam, if ever doubted before, cannot be doubted now by the Communists to the north or their allies.”

U.S. “retaliation” came swiftly, even though the North Vietnamese “raid” in the Gulf on August 4 never happened and even though—as President Lyndon Johnson’s national security adviser McGeorge Bundy later told NPR—he had cautioned Johnson about the dubious evidence for it.

Withdrawal means that the United States’ prestige will be lowered throughout the world and it means that the pressure of Communism on the rest of Southeast Asia will intensify.

This was a consistent theme in media coverage of Vietnam and was the subject of a major study in 1970 by Professor Susan Welch at the University of Illinois. It was a theme that helped set in concrete in the American mind the “issues” in Indochina. It helped ensure, Welch concluded, “that the reading public would view the war as a struggle between Communism and the Free World.”

Welch added that our major newspapers propagated a view that “the only way out of the crisis… was a military victory over the forces of Ho Chi Minh.” In other words, no negotiations.

Actually, the American public had been coming to the conclusion that the war was a mistake, but having been indoctrinated for so many years about our “vital interests” in Vietnam, opposition did not really gather steam until it was too late.

And today, for the Establishment media, it is déjà vu all over again, to quote Yogi Berra—again.