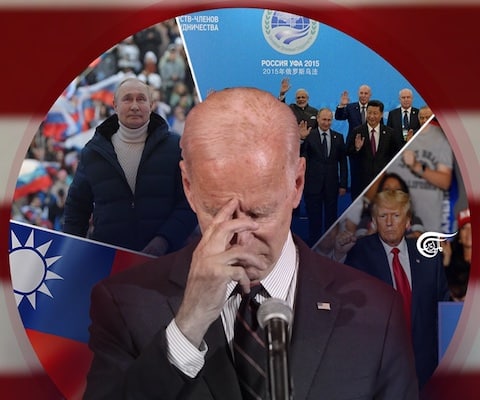 The meeting of the Shanghai Cooperation Organisation (SCO) in Samarkand has prompted a geo-economic earthquake – as did President Putin’s subsequent announcement of a partial mobilisation and referenda in four oblasts (provinces) of Ukraine, which almost certainly will result in their lightening integration into Russia.

The aftershocks are being felt everywhere, but particularly in Washington and Brussels.  All wait to see what happens next.

The West chose to leap upon Russia’s very limited Ukraine operation – the SMO (Special Militarily Operation) – to brand it: “an invasion of Ukraine”, which it was not (any more than Russian support in Syria constituted an invasion).

For, like its Syrian prototype, the SMO was crafted as the minimum of Russian military support that might provoke and catalyse a negotiated settlement along Minsk II lines. The perfect fit of the SMO to Russia’s Syria ‘footprint’ makes it clear — it was aimed to elicit a political settlement; one which so nearly occurred in Istanbul in March — until nixed by Britain and the US.

One may imagine, however, that in opting for such a restrictive posture, the Russian High Command may not have counted on Kiev’s willingness to throw so many of its soldiers’ lives into defending indefensible positions, or the abandonment by which the West would throw money and weapons at the Kiev forces.

It was not money and weapons alone: The West escalated its psyops deceptions to unheard-of heights of fantasy. It flooded the media with stories of the ‘invasions’ slow progress, claiming that this portrayed Russian weakness and failure.

All this taken together represents a crucial and deliberate choice of optics over real strategy, which has painted Washington into today’s dangerous corner.

That is to say that since the go-slow nature of the Russian offensive was intended essentially to minimize the impact on civilian lives and infrastructure — and also to give the parties plenty of time in order to reach the conclusion that negotiations were required before events turned existential, for one side or the other.

Unfortunately, the propaganda flooding the media has been so successful – touching on neuralgic and deeply layered currents of Russophobia – that western leaders have become hostage to this contrived ‘staging’ of a ‘panicked, faltering and weak Russia’.

Thus, against such an adverse backdrop, the Kremlin finally opted to incorporate culturally-Russian parts of Ukraine into Russia.

It is a gamble. The force of logic here is clear:  The conflict then would either have to cease, as Russia commits to defending those annexed territories as ‘Mother Russia’ — a game-changing shift that implies irresistible force mounted against Kiev, were it to further assault these territories. Or alternatively, the West must escalate further.

Putin’s gamble posits therefore the ending of conflict, and therefore the threat of nuclear conflict, or else continuing the (problematic) NATO war against Russia which more directly does risk nuclear war: Team Biden’s choice.

However, Biden – though he says he has no stomach for a war with Russia and will not permit one – likes to tout the idea that “our democracy” is under threat. “We have an obligation, a duty, a responsibility to defend, preserve, and protect ‘our democracy’”, he says.

Biden is not referring to generic democracy as a whole, but specifically to America’s liberal-élite hegemony (aka ‘our democracy’), and to its predilection for forever wars abroad being under threat — not just in Ukraine, but in Samarkand where the Eurasian giants such as China, India, Russia, Pakistan and Iran are integrating their economies to new levels and promising to create rival trading and communications system (away from the dollar).

In a speech made in Philadelphia recently, Biden – speaking in an eerie set-up at Independence Hall – extended threats to ‘our democracy’ from those abroad to warn against the threat of a different terror, closer to home — from “Donald Trump and the MAGA Republicans” who “represent an extremism that threatens the very foundations of our republic”.

Arta Moeini and Professor Carment argue that US politics have moved a complete circle: From Bush’s initial warning to the external world that, in the War on Terror, you are either ‘with us or against us’ — to Biden “weaponising the mythos of our democracy for partisan gains”.

Seen together, Biden’s rhetoric depicts his administration’s war against the amorphous specter of “MAGA fascism” at home and its stated goal of militarily defeating autocracies abroad as being but two sides of the same coin.

This doctrine ensnares all sides of the spectrum — by enmeshing them in false equivalencies: Deny the Establishment’s liberal interventionist foreign policy (in say, Ukraine) and be branded as an ‘extremist’ or even a ‘traitor’ – as Hungarian PM Viktor Orbán has been labeled in the European parliament, for taking Russia’s side in EU deliberations. Or, defend America’s civil liberties and due process toward participants in the 6 January demonstrations, and (then again) you are tarred as being in league with Putin.

So here is the rub: The Biden Administration still exhibits decidedly hawkish attitudes in respect to toppling Putin; to defending Taiwan; and containing Iran, in order to save ‘our democracy’. And he now uses this existential framing to attack his American political opponents at home, and to coerce American support for his agenda: “A battle for the soul” of the United States and the “challenge of our time” (autocracies).

But by linking them, were he to walk back one, he would undermine the other. Can Biden afford to see the Ukraine war end on terms favourable to President Putin, without it also being perceived as undermining his war on Trumpist ‘authoritarianism’ too? Is Biden trapped by his own ‘clever’ language game, one that was predicated on the expectation of Putin losing in Ukraine?  Yet, dare he risk nuclear escalation to maintain the ideological equivalence?

Moeini and Carment have noted:

This logic has now become the operating principle behind what may be called the Biden Doctrine, which is expected to be unveiled in the administration’s forthcoming National Security Strategy. It holds that the fight for democracy is incessant, totalising, and all-encompassing. That neutralising the alleged threat of fascism at home, personified by MAGA and former president Trump, is part of a larger apocalyptic struggle to defend the liberal international order abroad.”

The West and its delusions are deeply entrenched. It can end as a débacle for the Biden ‘doctrine’.