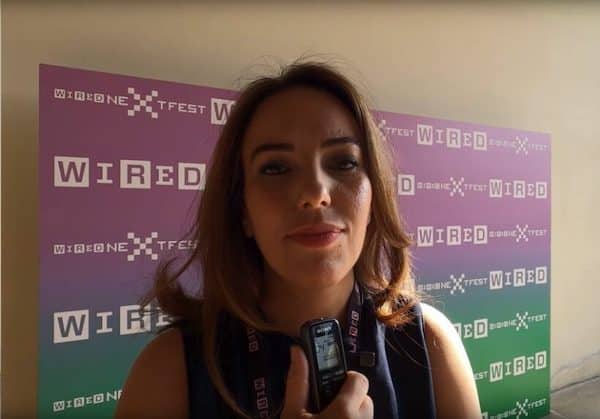 On Friday, October 7th, with some of the fellow promoters of the 24 hours for Assange, we attended the Wired Next Fest 2022, hosted for the occasion by the Fabbrica del Vapore in Milan. Obviously, without taking anything away from all the important moments of this great festival, what mattered more than anything else was to meet Stella Moris Assange, and get updated on the situation of her husband, Julian Assange, thus getting to the heart of the main theme of the event: “The future of democracy“.

We had the honour of meeting a tried, but tenacious and combative woman who has done and is doing so much to try to bring justice to this unprecedented political case. This is the transcript of the video interview that we made and launched for the first time on Saturday October 15th, during the 24 hours for Assange.

Stella Assange: Well, at the moment it’s looking very dark. Julian’s incarceration and imprisonment for the past three and a half years are a sign of our times. Julian embodies the principles of accountability and of democracy and he’s in prison, and I think we’re all in prison, as long as Julian’s in prison and it bodes very badly for where things are going. I think that what has been done to Julian over the past 12 years really tracks how we’ve descended… we’ve lost democracy, basically! It is meaningless to talk about democracy anymore, and what it is and where it’s going, is a question.

VT: Please give us the latest updates on the case.

SA: In June, the UK Home Secretary [Priti Patel, ed.] approved of the extradition into the United States. In the UK you can still appeal that decision, so Julian is trying to appeal that decision, but the reality is that Julian could be extradited within a matter of months. We hope that the High Court will hear the appeal, but they have no obligation to hear an appeal, so at the moment we’re waiting to hear back from the courts about whether and when an appeal hearing will be heard.

Of course, the United Kingdom is trying to withdraw from the European Court of Human Rights system, so, even that avenue of appeal [could be rejected, ed.], which has always been, kind of, the last safeguard for people who are having their rights abused, within the Council of Europe area. The UK wants to withdraw from that system, so Julian might not even have resort to the European Court of Human Rights, although we hope that he will.

If he does, then the case will be stopped at that stage and [we hope that, ed.] the UK would honour the decision of the European Court of Human Rights, but obviously it’s looking like the UK government just wants to withdraw from every international safeguard and go its own way, into a very dangerous place.

VT: I would like to ask you if, apart from the very important support from the Mexican president, is there any other major support you received recently?

SA: Julian is a symbol of democracy and anti-imperialism in many countries, so Latin American countries right now that are supportive of Julian are Argentina, Mexico and a few others and we’re waiting to see the results of the Brazilian election as well, because as you may know Lula da Silva has expressed how Julian should win the Nobel Peace Prize.

VT: Can you tell us if there has been some sort of raise into the people’s consciousness about this case?

SA: Absolutely. There has been progressive awareness over time and I think that’s not just the success of the campaigns, which are incredibly important, it is both those campaigns that have grown and grown and people that have become informed about the case, because the facts of the persecution itself speak for themselves. So it’s really about breaking through informing people properly about what Julian is being charged for, which is the documents about the Iraq and Afghan Wars, torture in Guantanamo Bay and so on.

But I think it’s also because the average person is basically a witness to this monumental injustice and they understand that you can’t keep a person in prison for years on and indefinitely, who is not serving a prison sentence: this is arbitrary detention in its purest form, it is persecution in its most primary expression and the average person who has a sense of justice and of fairness can see that what is being done to Julian is cruel, inhumane and torturous treatment.

VT: Regarding this last topic that you brought forward, it’s very important for us to understand the human part of the story: I would like to know when was the last time you could see your husband, your children could see their father and how’s his health right now?

SA: Fortunately, at the moment, with our 3 and 5 year-old children, we can visit Julian in prison twice a week [information that Stella released to me later, ed.]. Julian’s health is deteriorating by the day, because that is what prison does to you, he’s in a single prison cell in the United Kingdom; in that prison they have prisoners in their cells for over 20 hours a day, so the isolation is extremely difficult for him.

Obviously, he’s not getting the type of physical movement that he needs in order to stay healthy and he’s fighting an enormous fight from that environment, so it takes a huge toll on him. Then the sheer injustice of it is what would be extremely difficult for any person to deal with, but Julian’s incredibly strong and he knows there’s a lot of support around the world, so he’s energized by the fact that people are mobilizing.

They’re mobilizing all over the world: tomorrow [October 8th, ed.] there will be a bunch of actions in many countries and then on the 15th of October, here in Italy, and in other parts of the world there will also be actions for Julian’s freedom and it’s important to keep the pressure up, to raise the pressure, so that Julian’s case is truly understood for what it is: a political case, a political persecution, not a legal process. It’s an abuse of the law in order to persecute a person.

Julian is incredibly grateful for everything that people [do, ed.] all over the world, the gestures, big and small that people do, in order to fight for his freedom in different ways and there is no action that is too small. There’s also a lot of linking up and connecting people who support Julian and there’s strengths and resilience in that action, and it is the ongoing fight that people will fight as long as Julian isn’t free: it’s that message that is incredibly important to keep growing until he’s free.

VT: Exactly because of that we will never stop trying to speak about the case and next week we are going to do a 24 hours live marathon with all the people that are going to speak about the case, along with Pressenza and my colleagues which who are here with me today! Is there anything else we can do to increase everybody’s attention about what’s going on? What is your very last thought to bring forward justice into this case?

SA: Well, Julian has stood up for people around the world and now people around the world would have to stand up for him, that’s what it will take in order to free him. The 24 hours marathon on the 15th to free Julian is incredibly important in order to integrate and consolidate support. We have to keep these actions up, people need to be more and more involved and follow what’s happening in the case, follow me, buy Nils Melzer’s book, buy Stefania Maurizi’s book: they are incredibly detailed deconstructions of the persecution against Julian and they show how what’s being done to Julian is criminal and [reveal, ed.] the criminals who are inflicting the damage on the innocent person who stood up for democracy.

Veronica Tarozzi, immediately after graduation, she leaves Cagliari to discover the world! She travels, studies and works between Europe, Africa, Asia and South America to learn about places, people, experiences and life stories of ordinary people, but above all out of the ordinary. In 2008 she teaches languagesin Salvador (Brazil) as part of a project for social emancipation and intercultural communication. She returns to Italy in 2009 and settles in Milan, where she will graduate in Linguistic and Cultural Mediation and will specialize in Linguistic Mediation towards migrants and asylum seekers. Here she begins activism in various organizations: from the Zeitgeist Movement Italy, to Associazione Società Sostenibile and Metaeducazione and actively participates in the community garden Coltivando. She is also a freelance journalist regularly enrolled in the Order of Journalists of Lombardy and writes articles for the web newspaper Italia Che Cambia, our partner, whose purpose is to tell a different Italy, made up of human and environmental sustainability and above all good practices, spreading them and creating a network between them; she is part of the MediAttivisti, network of journalists and social activists, born from the impulse of our International Press Agency, Pressenza, to spread a culture of human rights, peace and nonviolence.