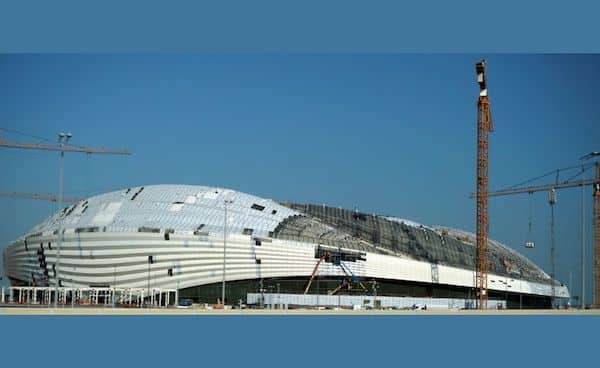 It’s hard to recall a sporting tournament that’s provided greater contrasts in outcome for those involved in its realisation than FIFA World Cup 2022, due to kick off this Sunday in Qatar. The imminent spectacle of conspicuous consumption, with its commitment to wealth generation greatly benefiting a small and already very rich minority, sits in sharp relief with the fates of thousands of working-class immigrants whose labours made the tournament possible in the first place.

Approximately 85% of Qatar’s 3 million inhabitants are migrant workers largely serving an oil-rich elite. Collective bargaining structures and meaningful legal representation are non-existent. Whilst joint committees exist, they cover only 2% of the workforce. Put simply, trade-union protection for those involved in the tournament’s vast construction projects remains non-existent. FIFA knew this would be the case when they closed the deal, and they know it now. That Sepp Blatter admits Qatar was a mistake (blaming Platini’s crucial block vote) is, to say the least, a bit late in the day. And in human terms, a mistake on a catastrophic scale.

The football itself, at times, feels like something of an irrelevance. Perhaps it ought to. FIFA, initially at least, talked much about ‘developing the game’ in the region. Surely as meaningless an example of corporate speak as was ever uttered. Netherlands manager, Louis Van Gaal, summed it up well:

It’s ridiculous that we are going to play in a country … How does FIFA say it? To develop the football there. That is bullshit … It’s about money, commercial interests. That’s the main motive of FIFA.

The cost of business

Football, at its highest levels of achievement, was once a sport that was also a business. With the dawn of Sky and satellite coverage, it became a business that was also a sport. Nasser Al Khatev, CEO of the tournament, estimates its total profits will be in the region of $17bn, with a projected audience of between three and four billion people. Football is now as much a global obsession as a business, but one whose impending incarnation has come at a heavy price: namely the often unexplained deaths of many hundreds of working people from some of the world’s poorest nations.

To be clear here, I won’t bother claiming moral superiority over those who’ll be cheering from their armchairs. Sporting spectacle provides respite from the general drudgery and insecurity working people are increasingly subject to. I’ll doubtlessly tune in. What I do claim, based on several years of personal experience, is an insight into the way things operate for immigrant workers in what I shall refer to as ‘the region’, a region united by language and oil, and, broadly speaking, an all-pervasive culture.

Since the tournament was awarded to Qatar in 2010, and work on the requisite infrastructure began, the roll-call of migrant workers’ deaths, compiled by the relevant embassies, read like those of a military disaster rather than a building enterprise:

These figures do not include deaths of Kenyan or Filipino nationals, or deaths occurring from the latter part of 2020 to the present day. It should also be noted that death records do not record occupation, or where the deceased was working.

Amongst the causes of death, the electrocutions, the multiple blunt injuries, the falls, the suicides, the causes undetermined due to decomposition, one cause dwarfs all others: those deaths deemed ‘natural’, mostly attributed to acute heart or repository failure. Fully 69% of deaths among Indian, Bangladeshi and Nepalese workers are recorded as such. Among Indians alone, the figure is 80%. Almost all are recorded without an autopsy. Heat is intense in the summer months, heat stress being the inevitable result. Merely being outside for prolonged periods requires considered management, let alone when performing physical labour.

The tournament’s organisational committee, whilst regretting the implications of the figures, maintain they are misleading. Further, they claim a policy of ‘transparency’ on the issue. For anyone with experience of the region’s workplace culture, claims of transparency, particularly on such a loaded issue, might reasonably be regarded as questionable.

The Qatari government insists that less than 10% of the deaths have occurred within the construction industry. Given the nature of construction work, the environment in which such work occurs, and the fact that since 2010, an international airport, a metro system, seven stadiums, about 100 hotels and an entire city have been built (all with connecting roads) the figure seems suspiciously, if not ridiculously low.

However you want to cut them, there’s something tragically wrong, pathetic even, in arguing numbers. Whether 6500 or 37 (a favourite figure with the organisers), the deaths amount to a lot of exploited, now dead, working-class people.

There is also, of course, the matter of football itself. Eric Cantona, who notably described workers’ treatment as horrible, summed up the feelings of many fans:

I don’t really care about the next World Cup, which is not a real World Cup for me. In the last decades, you had a lot of events in countries that are emerging … But Qatar, it’s not a football country … There is nothing. It’s only about money …

‘Supporting’ a team in the region is more a question of brand loyalty and media exposure than of genuine passion or civic pride. It’s generally possible to guess the team an individual ‘supports’ by the age that individual must have been when they first saw the Champions League trophy presented. Football, as it still is in much of Europe and South America, simply isn’t in the region’s DNA. It’s something exciting that happens on television. Whilst this isn’t a crime, it hardly provides sporting grounds for staging a world cup in an oil field.

It isn’t, of course, just the deaths that have been reprehensible. Despite FIFA repeatedly talking about football’s ‘core values’, a situation is allowed to exist where an ambassador for the host nation recently opined that homosexuality was the result of ‘damage in the mind’. Some welcome for members of the LGBTQ community.

Aside from such attitudes, and the (literally) industrial-scale death count, there remains (borrowing from now archaic VAR-speak) the ‘clear and obvious’ reality of issues related to workers’ pay and conditions. Non-transferrable work permits, ridiculously long hours, denial of rest days and arbitrary deductions are commonplace. To complain is to make things worse for yourself, as individual testimonies from Qatar have highlighted. Reports of the arrest and prolonged detainment of workers for ‘absconding’ have not been uncommon.

It’s also an open secret in the region that monies due to employees are often withheld by employers, and used instead for purposes of market speculation. I’ve had myself to wait months for wages, and I know people who’ve waited longer. I also know people who honoured contracts and never got paid at all.

Institutionally, an endemic problem lies in the absence of accountability within the systems in which workers are obliged to operate. To accept responsibility for injustices, whether the result of widespread bureaucratic incompetence or worse, of corrupt and exploitative practices, means losing face. An inadmissible concept to vast swathes of the management class. A concept more pressing than that of seeing justice done. And in the end, unless a man is ‘wasta’ (connected) there’s often nobody left for the worker to appeal to without recourse to the impenetrable and largely disinterested mechanisms of the law.

Seeking medical attention can also be problematic in the region, obviously more so if you do a job carrying a high risk of personal injury. There are no guarantees that promised insurance policies will be active. A foreign national known to me got mown down by a teenage driver. After three days he was ejected from the hospital, barely conscious, his employers had failed to maintain their payments. It transpired they’d diverted the required funds to a project they adjudged would provide a higher rate of return.

And the point here is this: I’m talking about the treatment of mostly privileged white-collar professionals, who are generally held in some esteem. Not working-class immigrants from poor counties, who mostly have it far worse. I’ve seen immigrant workers with broken bones, loitering in the carparks of clinics, begging passers-by to pay for their treatment. To summarise, you get charged the earth by agencies to get here, but once you arrive, you’re on your own.

Neither is there any sense of security when it comes to housing in Qatar. With the tournament less than three weeks away, a process of enforced gentrification began in the capital, Doha, with apartment blocks housing foreign workers (mainly Asians and Africans) being emptied in the areas earmarked for football tourists. A driver from Bangladesh, after living for fourteen years in the same neighbourhood, was given 48 hours to leave the villa he shared with 38 other people by the municipality; seemingly, a not untypical scenario:

In May this year the Pay Up FIFA campaign, a coalition of human rights organisations, trade unions and fan groups, called upon Qatar and FIFA to set up a compensation fund for disenfranchised workers, and the families of the dead. Amnesty International, backed by a number of European football federations, suggested FIFA match the $440 million prize money shared between the 32 nations taking part in reparations. But according to Amnesty, despite limited advancements in Qatari labour laws, little tangible has been done.

Meanwhile, FIFA has written to all 32 competing teams telling them to ‘focus on the football’ instead of handing out moral lessons.

At FIFA, no one people or culture or nation is better than any other. This principle is the very foundation stone of mutual respect and non-discrimination. So, please let’s all remember that and let football take centre stage.

Cliché will hardly be of practical use to the families of those that lost their lives. If FIFA had paid half the attention to health and safety protocols for workers off the field of play that they do for those on it, such corporate waffle may not have been so prevalent.

It seems the chief architect of the grim fiasco, Sepp Blatter, called it correctly in the end, when he admitted the tournament should never have been awarded to Qatar. The fact it was says very bad things indeed, not just about FIFA and its celebrity cheerleaders, but the sorry state of global capitalism as it stands, and the choices those with the least to lose were prepared to make for the sake of others’ profit margins.

Whilst the developed world reclines, sponsored beers to hand, in front of its plasma screens, VAR and stats, it would do well to bear in mind the most crucial of the numbers: those of the disenfranchised, and those of the dead.

Counterfire is expanding fast as a website and an organisation. We are trying to organise a dynamic extra-parliamentary left in every part of the country to help build resistance to the government and their billionaire backers. If you like what you have read and you want to help, please join us or just get in touch by emailing info@counterfire.org. Now is the time!