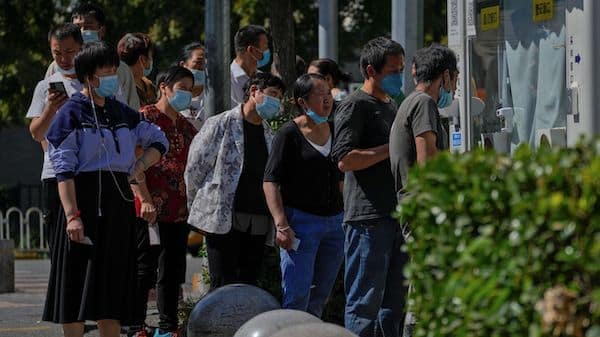 An article in the state-owned Global Times notes,

anti-epidemic management should be lifted in a timely manner to minimize the inconvenience caused by the epidemic to people, said Mi Feng, spokesperson for the National Health Commission (NHC).

Cheng insisted that the “20 measures” are “supported by sufficient scientific basis and evidence” and aim to fully suppress COVID-19 outbreaks, but the official figures speak for themselves. Over the past week, China has repeatedly set new daily records of COVID-19 infections, with a slight dip to 38,421 official new cases reported Tuesday.

While still low by international standards, the moves to ease previously effective measures—mass testing and contact tracing, isolation and quarantine guidelines, lockdowns and strict border management—pose the very real danger of escalating mass infections and deaths in a country of 1.4 billion people.

In a tacit recognition of the risks, the NHC is pushing for the vaccination of the elderly population, who are particularly vulnerable due to lower vaccination rates. However, vaccination alone has failed to halt the horrendous wave of infections and deaths in other countries around the world.

Significantly, the Global Times made no mention of the relatively small, middle class protests that took place over the weekend following an apartment fire last Thursday in the city of Urumqi, the capital of Xinjiang Province. The protests in as many as 18 cities numbered in the hundreds, possibly low thousands in some cases, and were in part fuelled by demonstrably false claims that anti-COVID restrictions were responsible for the 10 tragic deaths in the fire.

While the protests had disparate elements, the dominant theme was the demand for “freedom” from COVID restrictions, which has been taken up in the US and Western media in a veritable avalanche of propaganda calling for an end to China’s Zero-COVID policy. The protests reflect an ongoing, reactionary campaign among largely middle-class layers on social media in China condemning Zero-COVID measures and pointing to their absence in the rest of the world, while ignoring the disastrous consequences and huge death tolls that have resulted.

The protests were clearly not spontaneous. For instance, one rally in Shanghai organised via Telegram on social media was clearly oriented to foreign media, with a pinned message encouraging its members to reach out to the New York Times, CNN and Associated Press, as well as the anti-communist Epoch Times and CIA-linked Radio Free Asia.

Far from being the voice of the Chinese people, videos of some of the protests show local residents denouncing the protesters and condemning their demands for an end to Zero-COVID restrictions.

Rather than mount a political defence of the Zero-COVID policy which has kept per capita rates of infections and deaths among the lowest in the world, the Chinese Communist Party (CCP) government and state-owned media has said nothing publicly on the protests. Nor has there been a response to the deluge of propaganda in the international press.

Asked about the protests at a Foreign Ministry briefing yesterday, spokesperson Zhao Lijian blandly declared that Chinese citizens enjoyed rights and freedoms, but these had to be “exercised within the framework of the law.”

The stony official silence on the protests is another indication, along with Tuesday’s NHC briefing, that the Chinese government is step by step adopting the same criminal “let it rip” policy as the US and other countries. As it shifts away from Zero-COVID, the last thing that the regime wants is a public debate about a policy that has been widely and patiently supported by the vast majority of the population despite its limitations and the personal difficulties involved.

The calls for “freedom” from affluent, self-centred middle-class layers are in marked contrast to the attitude of the working class. Last week’s protests by thousands of workers at Foxconn’s huge factory in Zhengzhou were driven not only by the company’s broken promises on pay and bonuses, as well as terrible working and living conditions, but its failure to adequately protect its employees against COVID-19 infections.

An article in yesterday’s Asia Times entitled, “Protests hasten Chinese exit from zero-Covid policy” cited unnamed Chinese sources stating that decisions to relax the Zero-COVID policy were taken prior to the CCP’s 20th Congress but “with omicron cases surging and protests threatening to get out of hand, the matter has become more urgent.”

According to the sources, further relaxation is now scheduled to start in the course of January when Beijing will formally announce the end of the pandemic and classify COVID as an endemic infectious disease. That’s earlier than previously planned.

Major Chinese cities, including Beijing, Guangzhou, Chongqing and Zhengzhou, are already advancing what NHC officials call “new optimised measures” that signify the ending of city-wide lockdowns that have effectively contained outbreaks in the past in favour of limited, localised lockdowns.

The lifting of Zero-COVID in China is not the result of the failure of this policy, as repeatedly declared by pundits in the Western media, but rather the limitations of the national framework within which it has been implemented.

The repeated waves of infections in China are the direct result of the virus being allowed to run rampant through populations in the rest of the world—infecting billions and killing millions, while providing the breeding ground for new, more infectious and immune-resistant variants.

The Chinese government is succumbing to the same enormous pressures to let the virus rip through the Chinese populations as has led other countries such as New Zealand and Vietnam to abandon policies that had effectively stopped viral transmission. The CCP, which has presided over decades of capitalist restoration, represents powerful corporate interests which insist that profits must take priority over the health and lives of working people.

It is significant that Zhengzhou, home of the Foxconn factory, as known as iPhone City, has been one of the first to further ease anti-COVID restrictions. As of today, the city will remove so-called mobility controls, i.e. lockdowns, and replace them with “normal COVD-combating measures”—in other words, the new limited “20 measures.” Apple, which has been desperate to overcome severe labour shortages at the Foxconn plant in order to boost the production of the latest iPhone model in time for the holiday shopping season, will undoubtedly be grateful.