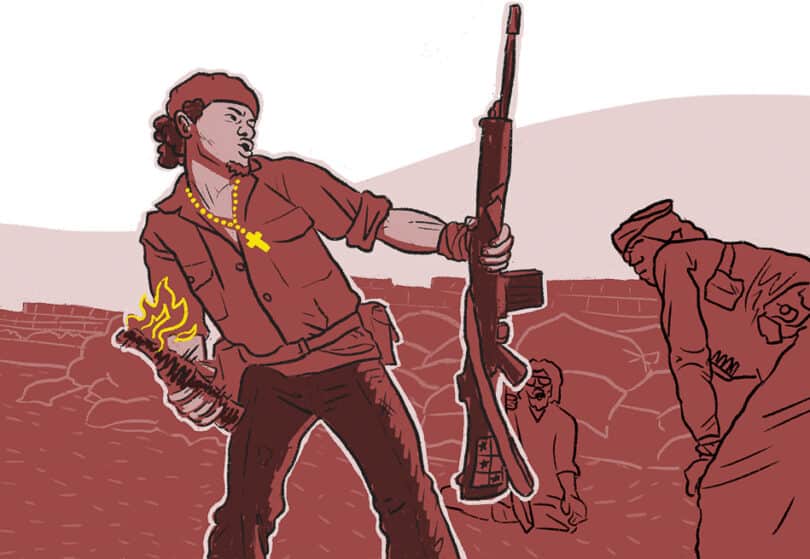 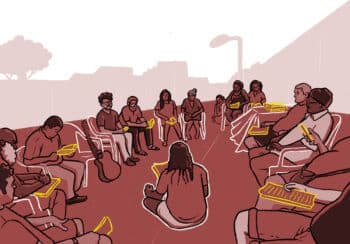 Neighbourhood residents and other guests participate in a popular bible study in Petrolina, in the state of Pernambuco, 2019.
Reference photograph sourced from the Popular Communication Centre

The International Labour Organisation’s Global Wage Report 2022—23 tracks the horrendous collapse of real wages for billions of people around the planet. The gaping distance between the incomes and wealth of 99% of the world’s population from the incomes and wealth of the billionaires and near-trillionaires who make up the richest 1% is appalling. During the pandemic, when most of the world has experienced a dramatic loss in their livelihoods, the ten richest men in the world have doubled their fortunes. This extreme wealth inequality, now entirely normal in our world, has produced immense and dangerous social consequences.

If you take a walk in any city on the planet, not just in the poorer nations, you will find larger and larger clusters of housing that are congested with destitution. They go by many names: bastis, bidonville, daldongneh, favelas, gecekondu, kampung kumuh, slums, and Sodom and Gomorrah. Here, billions of people struggle to survive in conditions that are unnecessary in our age of massive social wealth and innovative technology. But the near-trillionaires seize this social wealth and prolong their half-century tax strike against governments, which paralyses public finances and enforces permanent austerity on the working class. The constricting squeeze of austerity defines the world of the bastis and the favelas as people constantly struggle to overcome the obstinate realities of hunger and poverty, a near absence of drinking water and sewage systems, and a shameful lack of education and medical care. In these bidonvilles and slums, people are forced to create new forms of everyday survival and new forms of belief in a future for themselves on this planet. 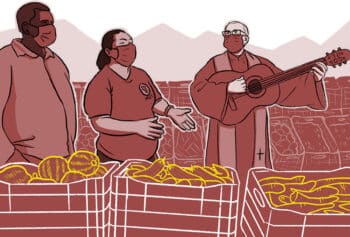 These forms of everyday survival can be seen in the self-help organisations—almost always run by women—that exist in the harshest environments, such as inside Africa’s largest slum, Kibera (Nairobi, Kenya), or in environments supported by governments with few resources, such as in Altos de Lídice Commune (Caracas, Venezuela). The Austerity State in the capitalist world has abandoned its elementary duty of relief, with non-governmental organisations and charities providing necessary but insufficient band-aids for societies under immense stress.

Not far from the charities and self-help organisations sit a persistent fixture in the planet of slums: gangs, the employment agencies of distress. These gangs assemble the most distressed elements of society—mostly men—to manage a range of illegal activities (drugs, sex trafficking, protection rackets, gambling). From Ciudad Nezahualcoyotl (Mexico City, Mexico) to Khayelitsha (Cape Town, South Africa) to Orangi Town (Karachi, Pakistan), the presence of impoverished thugs, from petty thieves or malandros to members of large-scale gangs, is ubiquitous. In Rio de Janeiro, Brazil, the favelados (‘slum dwellers’) of Antares call the entrance of their neighbourhood bocas (‘mouths’), the mouths from which drugs can be bought and the mouths that are fed by the drug trade.

In this context of immense poverty and social fragmentation, people turn to different kinds of popular religions for relief. There are practical reasons for this turn, of course, since churches, mosques, and temples provide food and education as well as places for community gatherings and activities for children. Where the state mostly appears in the form of the police, the urban poor prefer to take refuge in charity organisations that are often connected in some way or another to religious orders. But these institutions do not draw people in only with hot meals or evening songs; there is a spiritual allure that should not be minimised. 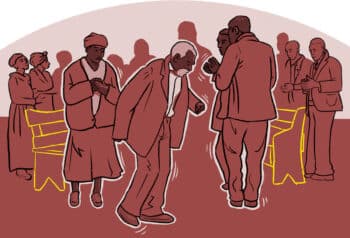 Our researchers in Brazil have been studying the Pentecostal movement for the past few years, conducting ethnographic research across the country to understand the appeal of this rapidly growing denomination. Pentecostalism, a form of evangelical Christianity, emerged as a site of concern because it has begun to shape the consciousness of the urban poor and the working class in many countries with traditionalist ideas and has been key in efforts to transform these populations into the mass base of the New Right. Dossier no. 59, Religious Fundamentalism and Imperialism in Latin America: Action and Resistance (December 2022), researched and written by Delana Cristina Corazza and Angelica Tostes, synthesises the research of the Tricontinental: Institute for Social Research (Brazil) working group on evangelism, politics, and grassroots organising. The text charts the rise of the Pentecostal movement in the context of Latin America’s turn to neoliberalism and offers a granular analysis of why these new faith traditions have emerged and why they dovetail so elegantly with the sections of the New Right (including, in the Brazilian context, with the political fortunes of Jair Bolsonaro and the Bolsonaristas).

In the 19th century, a very young Karl Marx captured the essence of religious desire amongst the downtrodden: ‘Religious suffering’, he wrote, ‘is, at one and the same time, the expression of real suffering and a protest against real suffering. Religion is the sigh of the oppressed creature, the heart of a heartless world, and the soul of soulless conditions. It is the opium of the people’. It is erroneous to assume that the turn to forms of religion is merely about the desperate need for goods that the Austerity State has not been willing to provide. There is more at stake here, far more indeed than Pentecostalism, which has earned our attention, but which is not alone in its work in the slums of the urban poor. Trends similar to Pentecostalism are visible in societies that are dominated by other religious traditions. For instance, the da’wa (‘preachers’) of the Arab world, such as the Egyptian televangelist Amr Khaled, provide a similar kind of balm, while in India, the Art of Living Foundation and a range of small-time sadhus (‘holy men’) along with the Tablighi Jamaat (‘Society for Spreading Faith’) movement provide their own solace.

What unites these social forces is that they do not focus on eschatology, the concern with death and judgment that governs older religious traditions. These new religious forms are focused on life and on living (‘I am the resurrection and the life’, from John 11:25, is a favourite of Pentecostals). To live is to live in this world, to seek fortune and fame, to adopt all the ambitions of a neoliberal society into religion, to pray not to save one’s soul but for a high rate of return. This attitude is called the Life Gospel or the Prosperity Gospel, whose essence is captured in Amr Khaled’s questions: ‘How can we change the whole twenty-four hours into profit and energy? How can we invest the twenty-four hours in the best way?’. The answer is through productive work and prayer, a combination that the geographer Mona Atia calls ‘pious neoliberalism’. 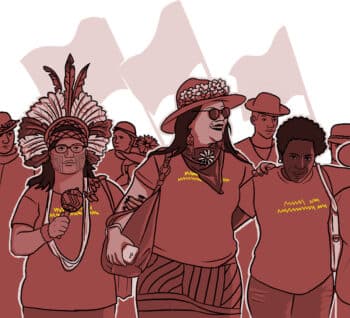 More than 100,000 women from across Brazil participated in the March of Daisies (Marcha das Margaridas), a public action in the country’s capital, Brasilia, in 2019 demanding popular sovereignty, democracy, justice, equality, and an end to violence.
Reference photograph by Natália Blanco (KOINONIA Ecunumical Presence and Service), sourced from the ACT Brazil Ecumenical Forum (FEACT)

Amidst the despair of great poverty in the Austerity State, these new religious traditions provide a form of hope, a prosperity gospel that suggests that God wants those who struggle to gain wealth in this world and that measures salvation not in terms of divine grace in the afterlife but in the present balance of one’s bank account. Through the affective seizure of hope, these religious institutions, by and large, promote social ideals that are deeply conservative and hateful towards progress (particularly towards LGBTQ+ and women’s rights and sexual freedom).

Our dossier, an opening salvo into understanding the emergence of this range of religious institutions in the world of the urban poor, holds fast to this seizure of the hope of billions of people:

In order to build progressive dreams and visions of the future, we must foster hope among the people that can be lived in their daily reality. We must also recover and translate our history and the struggle for social rights into popular organisation by creating spaces for education, culture, and community in which people can gain better understandings of reality and engage in daily experiences of collective solidarity, leisure, and celebration. In these endeavours, it is important not to neglect or dismiss new or different ways of interpreting the world, such as through religion, but, rather, to foster open-minded and respectful dialogue between them to build unity around shared progressive values.

This is an invitation to a conversation and to praxis around working-class hope that is rooted in the struggles to transcend the Austerity State rather than surrender to it, as ‘pious neoliberalism’ does.

In February 2013, Jabhat al-Nusra, the al-Qaeda affiliate in Syria, went to the town of Maarat al-Nu’man and beheaded a seventy-year-old statue of the 11th century poet Abu al-Alaa al-Ma’arri. The old poet angered them because he is often thought of as an atheist, although, in truth, he was mainly anti-clerical. In his book Luzum ma la yalzam, al-Ma’arri wrote of the ‘crumbling ruins of the creeds’ in which a scout rode and sang, ‘The pasture here is full of noxious weeds’. ‘Among us falsehood is proclaimed aloud’, he wrote, ‘but truth is whispered… Right and Reason are denied a shroud’. No wonder that the young terrorists—inspired by their own gospel of certainty—decapitated the statue made by the Syrian sculptor Fathi Mohammed. They could not bear the thought of humanity resplendent.