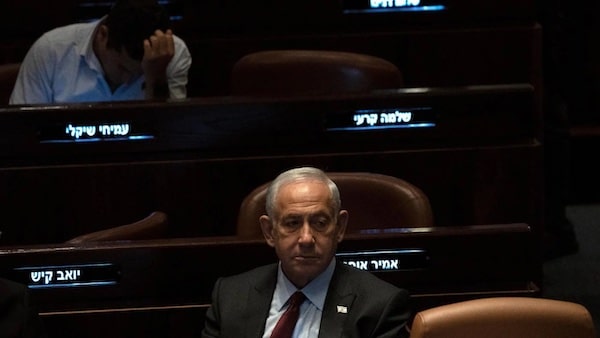 Faced with criticism on whether the United States should trumpet its “unbreakable bond” with an incoming Israeli government headed by fascist parties, lawbreakers and homophobes, the Biden administration has squirmed.

U.S. Secretary of State Antony Blinken observed defensively this month that Washington would “gauge the government by the policies and procedures, rather than individual personalities”.

What suffering might have been avoided had the U.S. previously been prepared to judge Israel based on policy? Not least, the necessary pressure might have been exerted to prevent 2022 from becoming the bloodiest year for Palestinians in the West Bank since 2005.

But, despite what Blinken says, Israeli governments are never held to account for policy, whether it be illegal settlement-building, the 15-year siege of Gaza and its regular bombardment, or house demolitions in East Jerusalem.

Instead, U.S. administrations have been only too ready to accept from Israel’s leadership any security rationalisation or placatory promise—and declare the most unlikely Israeli prime ministers “peacemakers“.

But Blinken’s observation was preposterous for a further reason.

How exactly can the “personalities” in the new government—the most religious and far-right in Israel’s history—be divorced from its policies?

Consider one such “personality” in Benjamin Netanyahu’s new coalition. In a recent interview with Channel 4, Zvika Fogel not only demanded the scrapping of “proportionality”, the cornerstone of international humanitarian law, but then specified: “If it is one Israeli mother crying, or a thousand Palestinian mothers crying, then a thousand Palestinian mothers will cry.”

Fogel’s view is not surprising. He belongs to the fascist Jewish Power party. Before he became a politician, he served in several senior roles in the Israeli military, including being in charge of Southern Command, which covers Gaza. Over the years, he enjoyed plenty of scope to implement his worldview.

It is not clear yet whether Fogel will get a government job. But his boss in Jewish Power, Itamar Ben-Gvir, certainly will.

Netanyahu needs to keep sweet Jewish Power and its sister parties: Religious Zionism and Noam. Running together, they won the third-largest tally of votes in last month’s general election. Despite wide support, they represent the interests of the most unhinged, violent elements within the settler movement.

Until this electoral upset, Ben-Gvir was best known for repeated incidents of thuggery and racist incitement.

He has been filmed attacking Palestinian shopkeepers in Hebron and brandishing his personal firearm at Palestinians. In 2007, he was convicted of supporting a terror organisation, the outlawed Kach party of the virulent anti-Arab racist Rabbi Meir Kahane.

Ben-Gvir averted any danger of a second conviction by rebranding Kach as Jewish Power. Now the terror organisation is in government.

Netanyahu understands only too well that he has embarrassed his U.S. superpower patron by getting into bed with openly fascist parties.

This is why last week he did his best to play along with Blinken’s pretence. “Coalitions make interesting bedfellows,” Netanyahu told the U.S. radio station NPR, adding: “They [Religious Zionism] are joining me. I’m not joining them.” 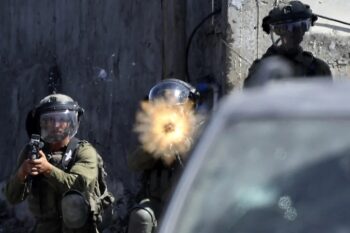 Israeli soldiers during clashes with Palestinian demonstrators in the village of Kfar Qaddum in the occupied West Bank, near the Jewish settlement of Kedumi, on 30 September 2022 (AFP)

He argued that Ben-Gvir had “modified a lot of his views” since his 2007 conviction—and that in any case, as prime minister, Netanyahu would keep him on a tight leash.

“With power comes responsibility… I certainly will ensure that that will be the case,” he reassured.

Except that is not how it has looked from the way the coalition negotiations have unfolded—not in the least. Netanyahu needs Ben-Gvir propping up his government far more desperately than Ben-Gvir needs to serve as a nondescript rightwing cog, or a placeholder, in another Netanyahu government.

This is going to look like no other Netanyahu cabinet. The new prime minister will be far weaker, far less dominant than the Netanyahu we are used to.

Give away the store

Netanyahu’s top priority is subverting the Israeli legal system so that his current trial on bribery, fraud and breach of trust charges can be brought to a halt. A conviction and jail sentence would finish his political career.

Religious Zionism shares Netanyahu’s goal. They want to destroy what they consider a “leftist” Supreme Court, leaving the way unimpeded to create an even more strictly Jewish society, both religiously and ethnically.

But whereas Netanyahu is looking out chiefly for himself, Ben-Gvir is a zealot. He campaigned on a promise to shake up Israeli politics and drive it even further to the ultra-nationalist, religious right. Given his self-cultivated image as a fearless political bruiser, Ben-Gvir cannot be seen backing down.

Which explains precisely how the coalition negotiations have played out. Netanyahu has given away the store on issues that matter most to Ben-Gvir and his allies.

They will have unfettered control over key areas of policy that can help seed their revolution: security forces inside both Israel and the occupied territories, the running of the occupation, education programmes and Jewish identity.

Netanyahu has no time to waste. Last week, he began rushing through legislation to pass greater powers to his extremist allies and cement their backing.

Ben-Gvir’s main political ally, Bezalel Smotrich of Religious Zionism, will become the first politician with direct power over the misnamed Civil Administration, the military dictatorship that runs the day-to-day affairs of the occupation. He will be able to further immiserate Palestinians while aiding the most extremist Jewish settlers, his friends, in their land grabs.

He can even make conditions harsher in Gaza, by refusing permits to transfer goods into the coastal enclave or awarding permits to Palestinians who need to leave to study or for emergency medical treatment.

Ben-Gvir, meanwhile, is being given control of a new national security ministry, a post created for him with vastly expanded powers. His scope for making mischief will be unprecedented.

The role of the previous internal security ministry was to deal with policing inside Israel. Historically, the chief area of friction has been over the police’s treatment of a Palestinian minority in Israel of nominal citizens, a fifth of the Israeli population. These third-class citizens, the remnants of the Palestinian population who survived mass expulsions in 1948, have been forced mostly to live in segregated communities, away from the Jewish majority.

The Palestinian minority has long complained that the Israeli police do not deal with the real crimes that affect them, instead defining any political activity or protest in their communities as criminal. The far-right wants the police to crack down even harder.

Ben-Gvir will oversee not only the regular police but take charge of the Border Police, a large paramilitary force that operates both in the occupied territories and inside Israel. Until now its activities in the West Bank have been run by the Israeli army.

Control of the Border Police gives Ben-Gvir critical leverage over how relations with the Palestinian populations on either side of the Green Line are managed. The Border Police are invariably on the front line in handling Palestinian protests and enforcing house demolitions.

Ben-Gvir will also oversee a notorious undercover unit, the mistaravim, that infiltrates Palestinian protests, often acting as agents provocateur and providing the Border Police with the pretext to violently break up demonstrations and arrest organisers.

His new role will mean Ben-Gvir gets to decide how, or even if, the Border Police enforce Israeli court orders to dismantle structures set up by extremist Jewish settlers on Palestinian land in violation of Israeli law—as well as, of course, international law. Those lawbreakers are Ben-Gvir’s closest allies.

And he will be micromanaging the same police force that is supposed to keep the peace on the al-Aqsa mosque plaza between Palestinian worshippers and Jewish zealots who want to set the Middle East on fire by praying there—as a prelude to destroying the mosque. Those zealots include Ben-Gvir himself.

If all this wasn’t enough, he will oversee the issuing of gun licences too, potentially allowing him to arm a far larger swath of the Jewish population. The outgoing defence minister, Benny Gantz, has warned that Netanyahu is giving Ben-Gvir his own “private army“. That is the aim.

Ben-Gvir now has multiple ways to antagonise, inflame and outrage Palestinian communities on both sides of the Green Line to the point of all-out confrontation. A third intifada has never felt closer.

Pushed to the brink

For decades Israeli governments have required their security services to maintain a precarious balancing act—or what some misleadingly term “shrinking the conflict“.

On the one hand, the job of the military, the police and the intelligence agencies are to crush any sign of Palestinian nationalism, such as support for a Palestinian state, while also driving Palestinians off the bulk of the territory that would constitute such a state, in the West Bank and East Jerusalem.

The long-term aim is to cultivate a sense of hopelessness to encourage Palestinians to look for a life elsewhere, in exile.

But on the other hand, the security services are supposed to avoid using too much force, too quickly or on too many fronts, in case it unites Palestinians into open revolt.

Two major intifadas and several minor ones, including in May 2021, are evidence of the self-sabotaging nature of the task. There is simply no way to enforce apartheid and carry out ethnic cleansing that is not going to be rejected by its victims.

Over the years, Israel has sought to refine its balancing act, through official Palestinian collaboration. The first intifada ended with Oslo’s 1993 “peace process” and promises of a cumulative transfer of powers to a government-in-waiting, the Palestinian Authority under Yasser Arafat.

A second intifada erupted only a few years later, in 2000, as it became clear to Palestinians that Israel was not serious about self-rule. It took a new Palestinian leader, Mahmoud Abbas, to help restore the balancing act.

Israel intensified the pressure while Abbas conferred a “sacred” duty on his security forces to keep Palestinian protests off the streets.

Subcontracting the occupation’s security to the Palestinian Authority has bought Israel time.

The point is that, however brutal the current occupation is, and however badly Israel’s minority of Palestinian citizens are treated, the Israeli security services’ playbook is to push Palestinian society to the brink, but not—at least intentionally—over it.

Ben-Gvir and Smotrich have no such qualms. They want escalation and confrontation now, and they want it to the bitter end. Their whole project is premised on a war with the Palestinians, both in the occupied territories and inside Israel, to make inevitable a formal annexation by Israel of Palestinian territory.

In their view, only a no-holds-barred war on all Palestinians will be sufficient to crush their resistance and justify expulsions on such a grand scale. Ben-Gvir and Smotrich’s goal is a second Nakba, a repeat of the events of 1948 when Palestinians were driven out of most of their homeland.

Israel’s direction of travel has long been obvious to Palestinians. A new generation has been readying different vehicles of resistance, such as the Jenin Brigades and the Lions’ Den in Nablus, as faith in the PA erodes ever more deeply. Israel is gradually being forced to take back a “policing” role in West Bank communities as its own trust in PA “security cooperation” collapses.

A recent poll found nearly three-quarters of those living in the West Bank support the creation of armed groups, separate from the Palestinian Authority, to protect their communities.

Netanyahu has now cocked the gun and handed it to Ben-Gvir to start an annexation war. Washington may hope the incoming prime minister can restrain his extremist colleagues. But the truth is they now have the whip hand.