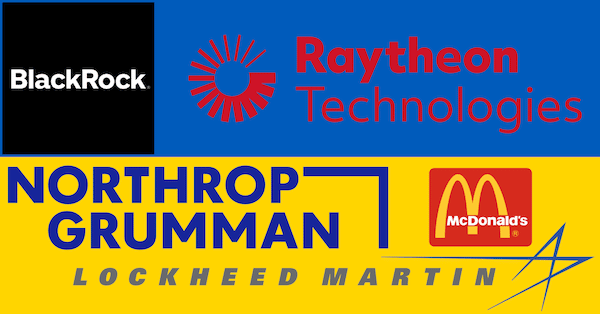 Kyiv has announced the addition of a fifth corporate logo to the Ukrainian flag following news that BlackRock will be playing a crucial role in the reconstruction of the nation. The world’s largest investment management firm will join Raytheon Technologies, Northrop Grumman, Lockheed Martin, and McDonald’s upon the now-omnipresent blue and yellow flag.

“I understand some Ukrainians may be frustrated at the continual additions to our nation’s glorious flag,” Ukraine’s President Zelensky said during a speech announcing the change. “Just last month we added the Raytheon logo, and now we’re adding BlackRock. I am sure it was a bit awkward for our American friends as they were continually adding stars to their flag back when they were adding lots of new states to their republic, too.”

“The only difference is instead of adding states, we’re adding multinational megacorporations,” the leader said.

BlackRock to "rebuild" Ukraine. This is going to make the neoliberalism and privatization the U.S. inflicted on post-Soviet Russia look like child's playhttps://t.co/IOm6XckVDo

Critics have complained that BlackRock’s new role in Ukraine could draw accusations of corruption, with some noting that the the company’s managing director Eric Van Nostrand was hired straight into a senior advisory position in the Biden administration’s Treasury Department just this past August, explicitly to shape U.S. economic policy on Russia and Ukraine.

Others have noted that BlackRock is a top beneficial owner of shares in major arms manufacturers who are reaping immense profits from the war in Ukraine, with tens of billions invested in Lockheed Martin, Boeing, General Dynamics, Northrop Grumman, and Raytheon.

These words of caution have however not been sufficient to dissuade the Ukrainian government from selling Ukraine piece by piece to western oligarchs like billionaire BlackRock CEO Larry Fink, and now one more giant corporation gets another slice of the nation.

A Ukrainian Embassy reception was sponsored by Northrop, Lockheed and Raytheon, reports @mideastXmidwest. (Not The Onion) https://t.co/U89y7gER8v pic.twitter.com/fNzika6utb

We can expect more such deals to be signed by Kyiv, which is slated to be re-named Goldman Sachs City early next year.