Suvrat Raju is a physicist with the International Centre for Theoretical Sciences (Bangalore) and a member of the Coalition for Nuclear Disarmament and Peace. The views expressed are personal and do not represent those of his institution. 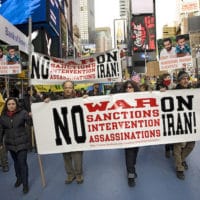 In the last week of June 2019, as this article was being written, tensions between the U.S. and Iranian governments escalated sharply. On June 20, 2019, in response to aggressive U.S. actions, including the mobilization of troops, naval forces, and aerial provocations, Iran shot down a U.S. surveillance drone flying  near the Iranian border.

While the world media was focused on a boring battle between the Tories and their New Labour cousins in Britain, a historic struggle was underway in Nepal.  Nine months after the victory of the Maoists in the 2008 constituent assembly (CA) elections, bourgeois forces, with support from the Indian government, succeeded in forcing them out […]

The American Empire, like other empires in the past, relies on two myths.  The first is that, internally, the American system is a meritocracy.  “Hard work and enterprise can overcome a disadvantage at birth whereas rich good-for-nothings soon lose their wealth.”  The second is that American foreign policy is principled and essentially just.  “It is […]