Hi, I’m a mainstream pundit. You may remember me from such commentaries as “The GOP and Its Acronym” and “Why Must the Poor Have Such Bad Taste in Clothes?” As a pundit, one of my duties is to impart to you my sense of stylish pique concerning the war in Iraq. The war, when you think about it, is really quite tragic. 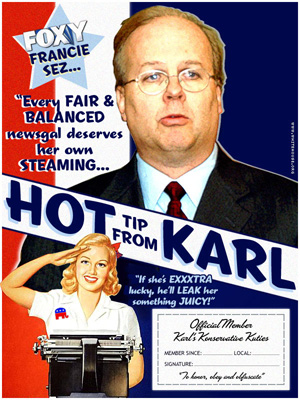 That’s where I come in. I persuade you not to think about it. I put the grief and uncertainty you may be feeling about the bombings and the deaths into a slick, cutting-edge perspective. I take your depressed inertia and hand it back to you on a plate, steaming and ready to eat. But for that, I need . . . Karl Rove.

Yes, Karl Rove, Senior Presidential Advisor, the man of the hour. Karl Rove, who was once called “Bush’s brain,” and who is now fast becoming Bush’s impacted colon. Did Karl Rove reveal the identity of a covert CIA operative? If so, did he commit a felony?

All the best pundits are talking about this. In fact, four out of five agree that speculating on what Rove did, and when and why and how, nets you a lot more readership than keeping up with the latest Iraqi body count. So move over, Robert Novak: Here is an investigative telephone interview I recently conducted about Karl Rove with an Iraqi woman named Fatima Ahmed. Speaking from a makeshift hospital in Baghdad, Fatima was one of hundreds of people gravely wounded last weekend in a series of car bomb explosions.

ME: So, Fatima. Now that you’ve had some quality time to think, what is your sense of Karl Rove?

ME: Did Rove tell the press that Valerie Plame worked for the CIA? If so, do you believe he did it to punish Plame’s husband, diplomat Joseph Wilson, for contradicting President Bush’s assertions that Iraq negotiated with Niger for weapons-grade uranium?

HER: What? Who are you? What are you talking about?

ME: You people don’t keep up with the news much, do you? See, if it’s proven that Karl Rove knowingly revealed the identity of a government agent, that could seriously cripple the Bush administration. It also means that, legally, Rove’s been a naughty boy.

HER: Boy? Yes. My baby boys. We were going to shop for food. They hadn’t eaten so well, you know, but my boys, they wanted some candy. The bright-colored gummy ones in the cellophane? I kept telling them, no, no, you have to wait — then everything went dark. Where are my baby boys?

ME: I see. Were you thinking about Karl Rove when this happened?

ME: Let’s pretend that we’re Woodward and Bernstein, Fatima. Why, for instance, did Karl Rove sign a waiver, exempting journalists from confidentiality? Why did New York Times reporter Judith Miller go to jail? Is this another Watergate? If so, who do you think should play Karl Rove in the movie?

HER: My husband died in jail. The Americans thought he was a terrorist. Are you an American?

ME: God, yes! Finally, we’re getting somewhere. Now, according to recent polls, most Americans don’t agree with Bush’s handling of the war. If Bush lied about Iraq having WMD, do you think this Rove scandal could prove that we were wrong to invade your country?

HER: Who is this man, Karl Rove?

HER: Most Americans? They don’t like the war any more? You think you were wrong to invade?

HER: Most Americans see the killings in our country on the news? Why, then, do most Americans wait for Karl Rove to go to prison? Why don’t you force your government to leave Iraq? Are you not the majority? What is wrong with you?

ME: That’s not very respectful, is it? Considering that we gave your country free and democratic elections?

HER: [shouting] WHO IS KARL ROVE? Years ago, before you invaded us, any child could have seen that we had no large weapons. Americans had been bombing us for years. There were the United Nations inspections. You think Karl Rove did this? I think you did this. You are no different than Karl Rove.

ME: Hey, I’m just trying to give you the big picture, lady. If you could forget your selfish pain for a minute —

HER: Do you know how we lived during your bombings? Do you know what your soldiers do to us on the streets? Can you help me to find my sons? Do you know if they are alive? If they are not dead, who is with them? How will they grow up? . . .

I was mighty glad when the operator cut us off. It isn’t easy to feel that someone who’s probably dying wishes you were dead. But I’m a pundit; I can take it. Next week, look for my report, “Secret Blogs of State Department Hookers.” For now, however, my work here is done.