Continuing turmoil in Germany since the elections on 18 September 2005 suggests a turning point in European politics, with implications for global politics: the European Left may have finally ceased its steady retreat.

It all began with stunning election results, so stunning that even normally glib liberal commentators seem to be taken aback. The German Right was supposed to win big, led by Angela Merkel, daughter of a resolute leftwinger who had moved from West to East Germany during her childhood and who held out for democratic transformation of the Communist system rather than wholesale return to capitalism. The Social Democrats had as much as conceded most of the Right’s demands for lower living standards, and the Greens had been coopted into only a slightly less severe version of the same program. Continuing to nominally oppose Bush policies in Iraq (but uphold them in Afghanistan), the parties formerly of social democratic and green movements had bowed to neoliberalism, on economy, ecology and, in practical terms, US-style globalism as well.

Then the results. Merkel did not win close to a majority. The Social Democrats did not do nearly as badly as predicted. But the raw surprise was the new factor, Links, a combination of the old East German PDS with a dissident branch of the Social Democracy led by Oskar Lafontaine, a former rival of Gerhard Schröder, and an amalgam of direct-action movements centered in Berlin. It was a new New Left and it won nearly nine percent, well over the total for the thoroughly discouraged and nearly discredited Greens. 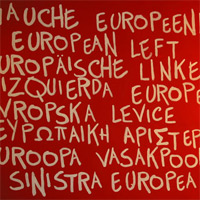 But Links didn’t come out of nowhere. Behind Links stood something so new, amorphous, and different that few Americans have even recognized its existence. A United Left group of elected officials across Europe (no doubt with an eye on the political drama of Latin America as well as the crises in the Middle East) had been quietly planning a large-scale coordinated response to the capitulation of Social Democrats to “modernization” on the Bush/Blair lines. In the streets, protests against privatizations had already been massive in 2003-04, with some coordination across borders and a huge common action in Brussels in March, 2004. Unions fighting against retrenchment now found themselves closer to social movements of various kinds, including those of new immigrants and the poor more generally. They had — as they had finally begun to grasp — little choice.

These impulses, inside and outside parliaments, suggest the outlines, if not yet of a new International, then at least a renewed sense of solidarity. A new network of international solidarity has long been needed, a network capable of replacing the vanished Communist international and badly collapsed Socialist International — each swallowed up by corruption in its own way — but including elements of both communist and socialist groupings with at least a spark of rebellion remaining. Trade union affiliates and youth movements far to the left of their reigning parties have repeatedly breathed new life into social movements and now show signs of doing so again.

The German development came at a vital moment. The Bush administration’s urgent need to expand the war toward Syria or Iran as a way to reverse its own downward trend, coupled with Tony Blair’s desire to divert attention from his own unpopularity, creates an explosive situation, to say the least. But so does people’s feeling that the redistribution of profits upward and misery downward — in tandem with globalization — must be reversed immediately (or else there will soon be nothing to save, what with climate change).

At this writing, the German Social Democrats are warring with themselves. Younger ranks are growing restless, and wiser heads realize that the Grand Coalition of Social and Christian Democrats is likely to make the new New Left larger and more volatile, Links becoming the most important political development in a generation. In that light, the surprise victory of distinctly leftwing Andrea Nahles as second-most important leader on the SPD’s Executive Committee signals the SPD’s need to cover its left flank with militant rhetoric while pursuing further cooptation with the Right . . . or something else. As leading conservatives for their part decline to join anything but a solid Center-Right government, the supposed Grand Coalition may never coalesce (though the nomination of Matthias Platzeck as party leader can still smooth the way), demanding new elections that neither major party wants. And then? Predictions are suspect. But something new is happening, and not only in Germany.