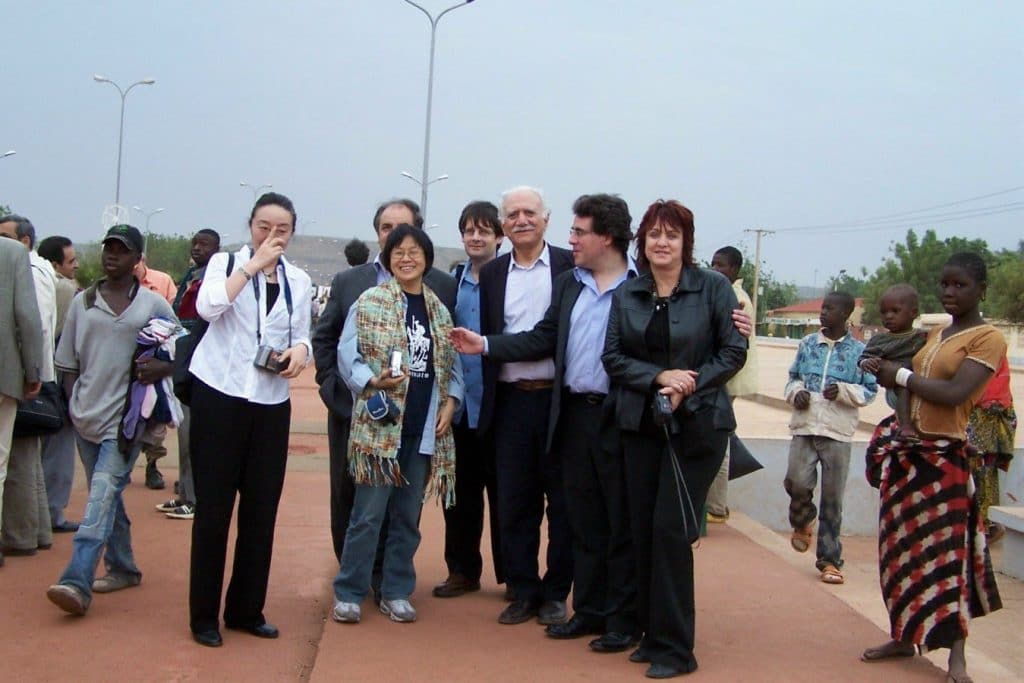 John Bellamy Foster was one of 25 or so authors of the following document, which presented at the Polycentric Social Forum in Bamako, Mali in January 2006, and adopted a week later by the Assembly of Social Movements of the World Social Forum in Caracas, Venezuela. Download the Proposals of The Bamako Appeal as a PDF (or as a DOCX file). The Bamako Appeal was published at the Web site of the Third World Forum (TWF) / Forum du Tiers Monde (FTM) in four languages: English, French, Arabic, and Spanish. Sign onto the Appeal at the TWF/FTM Web site.

More than five years of worldwide gatherings of people and organizations who oppose neo-liberalism have provided an experience leading to the creation of a new collective conscience. The social forums — world, thematic, continental or national — and the Assembly of Social Movements have been the principal architects of this conscience. Meeting in Bamako on Jan. 18, 2006, on the eve of the opening of the Polycentric World Social Forum, the participants during this day dedicated to the 50th anniversary of the Bandung Conference have expressed the need to define alternate goals of development, creating a balance of societies, abolishing exploitation by class, gender, race and caste, and marking the route to a new relation of forces between North and South.

The Bamako Appeal aims at contributing to the emergence of a new popular and historical subject, and at consolidating the gains made at these meetings. It seeks to advance the principle of the right to an equitable existence for everyone; to affirm a collective life of peace, justice and diversity; and to promote the means to reach these goals at the local level and for all of humanity.

In order that an historical subject come into existence — one that is diverse, multipolar and from the people — it is necessary to define and promote alternatives capable of mobilizing social and political forces. The goal is a radical transformation of the capitalist system. The destruction of the planet and of millions of human beings, the individualist and consumerist culture that accompanies and nourishes this system, and its imposition by imperialist powers are no longer tolerable, since what is at stake is the existence of humanity itself. Alternatives to the wastefulness and destructiveness of capitalism draw their strength from a long tradition of popular resistance that also embraces all of the short steps forward indispensable to the daily life of the system’s victims.

The Bamako Appeal, built around the broad themes discussed in subcommittees, expresses the commitment to:

1. Construct a world founded on the solidarity of human beings and peoples

2. Construct a world founded on the full affirmation of citizenship and equality of the sexes

The politically active citizen must ultimately become responsible for the management of all the aspects of social, political, economic and cultural life. This is the condition for an authentic affirmation of democracy. Without this, the human being is reduced by the laws imposed on him or her to a mere provider of labor power, an impotent spectator confronted with decisions handed down by those in charge, a consumer propelled toward the worst waste. The affirmation, in law and in deed, of the absolute equality of sexes is an integral part of authentic democracy. One of the conditions of this democracy is the eradication of all forms of the patriarchy, either admitted or hidden.

3. Construct a universal civilization offering in all areas the full potential of creative development to all its diverse members

For neo-liberalism, the affirmation of the individual — not that of the politically active citizen — allows the spread of the best human qualities. The capitalist system’s unbearable isolation, imposed on the individual, produces its own illusory antidote: imprisonment in the ghettos of alleged common identities, most often those of a para-ethnic and or para-religious type. We want to construct a universal civilization that looks to the future without nostalgia: one in which the political diversity of citizens and cultural and political differences of nations and peoples become the means of reinforcing individual creative development.

Neo-liberal policies aim to impose as the sole method of socialization the force of the market, whose destructive impact on the majority of human beings no longer needs to be demonstrated. The world we want conceives sociability as the principle product of a democratization without boundaries. In this framework, in which the market has a place but not the predominantplace, economy and finance should be put at the service of a societal program; they should not be subordinated to the imperatives of dominant capital that favor the private interests of a tiny majority. The radical democracy that we want to promote reestablishes the creativeforce of political innovation as afundamental human attribute. It bases social life on the production and reproduction of an inexhaustible diversity, and not on a manipulated consensus that eliminates all meaningful discussions and leaves dissidents weakened and trapped in ghettoes.

5. Construct a world founded on the recognition of the non-market-driven law of nature and of the resources of the planet and of its agricultural soil

The capitalist neo-liberal model aims at submitting all aspects of social life, almost without exception, to the status of a commodity. The process of privatization and marketization to the ultimate degree brings with it devastating results on a scale without precedent in human history: the threat to the fundamental biogeochemical processes of the planet; destruction of biodiversity through the undermining ofecosystems, the waste of vital resources (oil and water in particular); the annihilation of peasant societies threatened by massive expulsion from their land. All these areas of society-nature metabolism must be managed as the common wealth and in accordance with the basic needs of all of humanity. In these areas, the decisions must be based not on the market but on the political powers of nations and peoples.

6. Construct a world founded on the recognition of the non-market-driven status of cultural products and scientific acquisitions, of education and of health care

Neo-liberal policies lead to turning cultural products into commodities and to the privatization of the most important social services, notably those of health and education. This option is accompanied by the mass production of low quality para-cultural products, the submission of research to the exclusive priority of short-term profits, the degradation of education and health care for the poorest sectors of the people, including even their exclusion. The reinstatement and expansion of these public services should reinforce the satisfaction of needs and rights essential to education, health care and providing food.

7. Promote policies that closely associate democracy without pre-assigned limits, with social progress and the affirmation of autonomy of nations and peoples

Neo-liberal policies deny the preconditions of social progress — that some claim are a spontaneous product of the market — preconditions such as the autonomy of nations and peoples, necessary to the correction of inequalities. Under the regime of market hegemony, democracy is emptied of all effective content, made vulnerable and compromised in the extreme. To affirm an authentic democracy demands giving to social progress its determining place in the management of all aspects of social, political, economic and cultural life. The diversity of nations and of peoples produced by history, in all its positive aspects along with the inequalities that accompany them, demands the affirmation of autonomy of peoples and nations. There does not exist a unique universal recipe in the political or economic spheres that would permit any bypassing of this autonomy. The task of building equality necessarily requires a diversity of means to carry it out.

8. Affirm the solidarity of the people of the North and the South in the construction of an internationalism on an anti-imperialist basis

The solidarity of all the peoples — of the North and of the South — in the construction of a universal civilization cannot be founded on the illusory notion that it is possible simply to ignore the conflicts of interest that separate different classes and nations that make up the real world. Such genuine solidarity must necessarily transcend the antagonisms inherent to capitalism and imperialism. The regional organizations behind the alternative globalization movement must seek to strengthen the autonomy and the solidarity of nations and of peoples on the five continents. This perspective is in contradiction to that of the present dominant model of regionalization, conceived as consisting of mere building blocks of neo-liberal globalization. Fifty years after Bandung, the Bamako Appeal calls for a Bandung of the peoples of the South, victims of really existing capitalism, and the rebuilding of a peoples’ front of the South able to hold in check both the imperialism of the dominant economic powers and U.S. military hegemony. Such an anti-imperialist front would not oppose the peoples of the South to those of the North. On the contrary, it would constitute the basis of a global internationalism associating them all together in the building of a common civilization in its diversity.

II. LONG-TERM OBJECTIVES AND PROPOSALS FOR the IMMEDIATE ACTION

In order to progress from a collective conscience to the building of collective, popular, plural and multipolar actors, it has always been necessary to identify precise themes to formulate strategies and concrete proposals. The themes of the Bamako Appeal deal with the following 10 fields, including both long-term goals and proposals for immediate action: the political organization of globalization; the economic organization of the world system; the future of peasant societies; the building of a workers’ united front; regionalization for the benefit of the peoples; the democratic management of the societies; gender equality; the sustainable management of the resources of the planet; the democratic management of the media and the cultural diversity; democratization of international organizations.

The Bamako Appeal is an invitation to all the organizations of struggle representative of the vast majorities that comprise the working classes of the globe, to all those excluded from the neoliberal capitalist system, and to all people and political forces who support these principles — to work together in order to put into effect the new collective conscience, as an alternative to the present system of inequality and destruction.