Students and workers in France have forged a powerful alliance against the government and its neo-liberal economic policies.  Mass organizations of high school and university students, all three federations of unions, and all left parties are coordinating actions together.  This alliance is shaking the French government in ways and to depths not seen since May 1968.  The messages that this alliance sends across Europe and beyond are (1) that dismantling of the welfare state has reached its limits and (2) that continuing the dismantling risks provoking mass resistance.  The specter of a real opposition to global neo-liberal capitalism in its centers has materialized.  The pseudo oppositions of the social democrats are exposed. 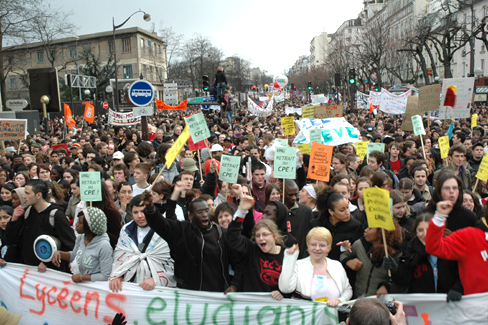 For years, the “socialist leaders” of Europe have profoundly limited their opposition to the roll-back of social services, wages, and job protections.  They offered merely to slow its pace.  They had been captured by the corporate mantra — imported from the US and UK — that the world economy and global competition required nothing less than “modernization.”  This bizarre Orwellian term described an actual historic going backwards to a pre-World War 2 kind of capitalism with its extreme inequalities of wealth, income, power, and cultural opportunities.  The current movement in France is so powerful that it has, at least for the moment, silenced the usual voices of left accommodation to neo-liberalism.

A political bubble is bursting in France.  That bubble emerged as the conservatives currently in power — drawn chiefly from top corporate managements — got carried away in a spiraling neo-liberal euphoria.  In the linear logic of simplistic politics, they kept pushing one deregulation after another, one assault on job security and labor protections after another.  The process spun out of control and inflated beyond politically sustainability.

What took French neo-liberalism over the edge was a new rule rushed into law (the CPE) by Prime Minister Dominque de Villepin.  It attacked young workers under 26 years of age by allowing employers to fire them without cause for 2 years instead of the previous rule of 6 months.  Such a step would save employers more of the costs and bad publicity of justifying dismissals in the special tribunals France established to hear workers’ complaints of unjust terminations.

In the inverted language of neo-liberal public policy, the French government tried to sell the CPE law as “labor reform.”  Employers would now hire more of the unemployed Arab and African youth — those who had protested their conditions so dramatically last autumn — “because public policy is sensitive to minority youth needs.”

French officials tried thus to market a law subsidizing business as if it were meant to provide social support for poor minorities.  However, millions of French citizens, including many minority youth, were not fooled.  Those are the millions demonstrating in increasing numbers over the last two weeks.

The CPE law is actually more the expression of French politicians seeking support from — and therefore pandering to — the corporations.  The law is of little actual interest to corporations in France, however.  As reported to the International Herald Tribune (24 March 2006), two major employers of French young people were perfectly content with the 6-month period that the CPE law aimed to “reform.”  The Accor hotel chain and McDonald’s and its local restaurant franchisees pointed to their sustained growth and success.  McDonald’s employs 35,000 with an average age of 22, enjoys better sales in France than in most other countries, and plans to open 30 new restaurants here in 2006.  In fact, France offers profitable investments because of its rich markets, technological dynamism, employee skills and aptitudes.  The particular job protections removed by the CPE law simply matter little even for the firms most dependent on the youth labor market targeted by that law.

Why, then, did French political leaders rush through a law that provided little benefit to employers while it mobilized a powerful alliance of students and workers?  The answer is that French politicians took their pandering to neo-liberal hype too far in what even many of them now widely recognize as a colossal mistake.  Privatizing enterprises and freeing markets from state interventions and regulations had long been proclaimed by business leaders as a “reform that will revitalize the economy.”  They wanted to make more money.  Economists did their usual job of rationalizing and legitimizing these business objectives.  Their economic “science” proclaimed such a reform as the entire nation’s “best” course of action.  In the mutual reinforcement of politicians and economists, they badly overshot the target and produced the dangerous political backlash that is now happening in France.

Something like this is also happening in Germany.  But the form it has taken there is not street demonstrations and a massive student-worker alliance.  Instead, a new Left Party has emerged with a position parallel to the French opposition to the CPE.  Last year’s voter defeats of the new neo-liberal European constitution in France and the Netherlands have now evolved into a much deeper counter-hegemonic movement.  An historic political shift is underway in Europe.

The real question now is whether the student-worker alliance will remain merely an opposition to neo-liberalism or whether it will mature into a movement for an alternative to capitalism as the best security against a resumption of neo-liberalism.  The rest of the world, including the mass of Americans hurt by years of neo-liberal policies, have enormous stakes in the answer to that question.  If the media in the US were not owned by the supporters of neo-liberalism, they would present the historic importance of this question and explore the alternative answers.  Instead, they perform their subservient tasks by obscuring the significance of France’s student-worker alliance and grossly inflating the tangential vandalisms of a very few and the all-too-predictable provocations of the police.

Rick Wolff is Professor of Economics at University of Massachusetts at Amherst. He is the author of many books and articles, including (with Stephen Resnick) Class Theory and History: Capitalism and Communism in the U.S.S.R. (Routledge, 2002).