The impact of the “Day Without Immigrants” boycott and marches across the U.S. on May Day is far-reaching.  Crucially, this mass action humanized undocumented migrants under economic and political attack.

Significantly, their lives are moving from the margin to the center of the U.S. public mind.  Such social energy has a force of its own.

Energetically, millions of marchers for the dignity of undocumented migrants also struck a collective body blow against the ruling ideology that privileges individualism as the path to equity.  Last Monday’s political actions privileged collectivism and put a human face on the migrant labor that helps to make the U.S. economy what it is.

Let us look at the economy, then, measured by prices in the marketplace.  Undocumented migrant workers such as those IFCO employees arrested and deported in April by the federal government contributed to a U.S. manufacturing output of $4.3 trillion in 2004, according to figures from the Commerce Department.

This data measures undocumented migrant and native labor together in measuring output.  This is a key point that can form the basis for an improved political consciousness across the U.S.  Both groups share a common relationship of class as wage earners at the point of production.  They have a unity that may not be easy to see, but it is an economic reality.

Against that backdrop, Tyson Foods Inc. closed meat processing plants due to its work force’s participation in the recent May Day rallies.  The impact of these absences from work exceeds the loss of daily sales.

Extend Tyson workers’ absences to other workplaces.  Now imagine a boycott organized by both migrants without documents and native workers lasting for a day, days, or a week in demand of, say, a national health care program (Medicare for all, in other words).

Such an event, thanks to May Day 2006, is no longer unimaginable.  U.S. working families, undocumented migrants and natives, are strategically situated at the heart of the most capitalist society in world history to flex their collective muscle for a better quality of life.

Naturally, there are forces in motion to neuter the expanding circles of solidarity with undocumented migrants in the U.S.  This “bad cop, good cop” backlash is underway against them nationwide.

Take the Minutemen vigilante mob.  They illegally pursue and punish migrants without documents along the U.S.-Mexican border.

Then there is Congress, corporate America’s pet.  The venal House Republican bill that has passed is being revised in the Senate with the aim of splitting a social movement that threatens to redefine politics from the act of individuals who just cast votes into masses of them organizing, marching, and boycotting in militant unison.

Such a collective, grassroots movement of and by migrants without documents in concert with the native-born threatens the ruling ideology of the market as the way for individuals to achieve equality through growth: that is, the rising tide of commerce that lifts all boats, one person at a time, presumably those with the most initiative first.

Economic and social reality belies that pleasant illusion.  The U.S. work force need only look in the mirror.  Some 75 percent of them labor in jobs that do not provide health insurance, a retirement pension, and middle-income wages, according to a press statement by the Center for Economic and Policy Research in Washington.  Between 1979 and 2004, the inflation-adjusted gross domestic product per person rose 60 percent, unlike jobs with employer-paid health care, pensions, and middle-income wages, which remained the same at roughly 25 percent. 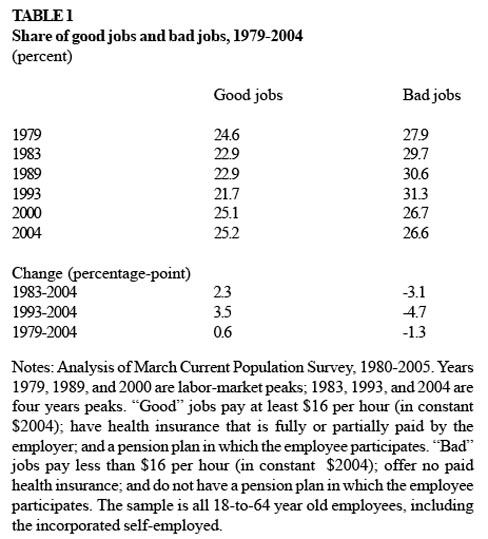 SOURCE: John Schmitt, “How Good is the Economy at Creating Good Jobs?” Center for Economic and Policy Research, October 2005, p. 6

In other words, workers in the U.S., migrants without documents and natives, are producing more, but their productivity is not increasing the percentage of good jobs in the U.S. economy.  This trend is not the fault of undocumented migrant workers.

Capitalism has created this transnational trend, and U.S. militarism has aggravated it.  During the last quarter century, Washington’s wars in Central America (directly and by proxy), as well as its trade and investment policy that imposed economic neoliberalism on the world, have pushed and pulled undocumented migrants into the U.S. In the meantime, corporate America and its political representatives have joined forces to squeeze all working families, immigrant and native-born.  This squeezing includes the growth of the prison-industrial system to warehouse people whose labor is not needed in the marketplace, disproportionately blacks and Latinos.

Blame the U.S. upper class and its never-ending search for low-wage labor.  Blame the two political parties that represent only the interests of the nation’s rich and powerful.

The May Day boycott and marches stateside took place within this historical context.  From these pages of history, then, is arising a social unity between families of migrants without documents and the native born.

There are vital lessons to be learned.  Equality is for everybody or it is for nobody.

Seth Sandronsky is a member of Sacramento Area Peace Action and a co-editor of Because People Matter, Sacramento’s progressive paper. He can be reached at <ssandron@hotmail.com>.