There’s a great tradition amongst the world’s citizenry that is perhaps best expressed in the words spoken by the late Berkeley radical Mario Savio.  During the Free Speech actions of 1964 that were aimed at the University of California’s repressive administrative dictates against student and staff political activity, Mario said:

Now, there are many folks around the world who feel that the operation of the machine has been odious for a long time, more and more joining that already large majority every day, but there are very few examples of people putting their bodies on any gear.   I suggest that is why we find ourselves in the state we are in today.  Too many of us have given up on stopping the machine from working at all.  If there is ever a time to awake from our slumber, that time is now.  The litany of death, repression, and exploitation of every form imaginable has grown too long.  As others have started to hint at, the time for mere protest is over.

In Olympia, Washington, a small town with a sizable number of citizens who are opposed to the imperial state’s wars and other outrages, there have been a number of actions that attempted to prevent the loading of ships that were bound for the battlefields of Iraq.  These actions stepped up a notch or two during the week of May 22-28th, 2006.  For those of you a little thin on US geography, Olympia is at the southernmost tip of the Puget Sound — the part of the Pacific Ocean that serves the much larger ports of Seattle and Tacoma.  Yet, the Port of Olympia does a fair amount of cargo business.  Given the close proximity of Fort Lewis, a large US Army base that is home to the Stryker Brigade, it has become one of the ports used to keep the troops in Iraq supplied with weaponry and other tools of war, most notably the Stryker Fighting Vehicle itself.

I used to live in Olympia, from 1987 until 1992.  During that time, we organized several protests and direct actions against the US wars in Central America and the Middles East.  There were several other radical impulses growing in town at the time as well.  Suffice it to say that the movement that was built against the first Gulf War in 1991-1992 created enough stability among anti-imperialists and other folks opposed to war to organize a permanent anti-imperial and anti-racist group in the town.  That group, known as the Olympia Movement for Justice and Peace (OMJP), dissolved and then reformed after the events of September 11, 2001.  OMJP serves as an umbrella for many other groups with parallel philosophies.  It is one of those ad hoc groups within OMJP that organized the aforementioned actions.  That group calls itself the Port Militarization Resistance (PMR).

In a recent statement to the community and the media, OMJP and PMR spoke about the responsibility of common citizens.  In part, it read:

The weapons shipments, and the use of our public property to prolong and supply the war in Iraq have made us complicit in crimes against humanity.  We refuse to be complicit any longer.  We will continue to utilize every available instrument of democracy, including direct action and disruption when necessary.  We are working to stop the war machine by standing in front of the machines of war as they attempt to enter our port. 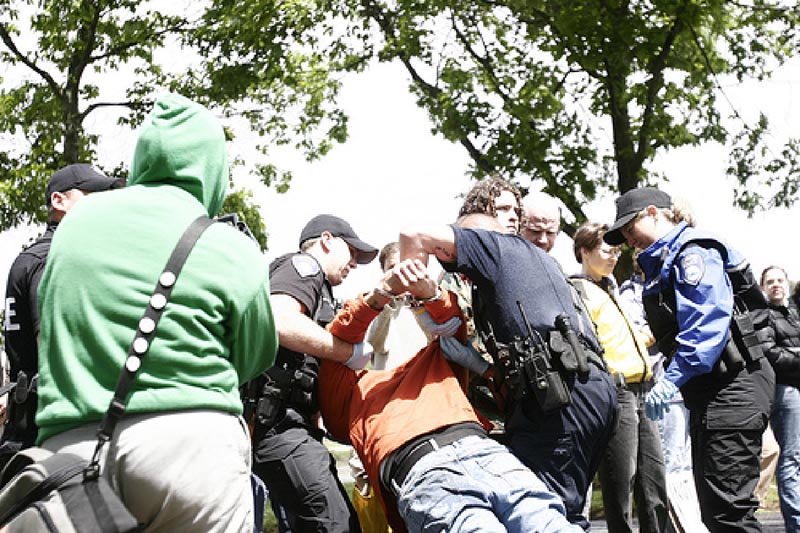 In an effort to get the story from the horse’s mouth, so to speak, I sent some questions via email to the spokespeople for Port Militarization Resistance.  What follows is the exchange between one of the spokespeople, Drew Hendricks and myself.

Ron: What’s going on up there in Olympia with the convoy blockades?  Are the trucks being blockaded military vehicles?  What are they carrying and where are the materials bound?

Drew: The vehicles being blocked are a type of combat vehicle known as the Stryker Vehicle.  They are armored vehicles with mounted weapons and they each carry troops into patrols or battles.  Sixteen people (as of Thursday) have been arrested for blocking the movement of these vehicles, in various ways, toward the Port and from there to the war in Iraq.

Ron: Can you give me a brief history of what came before the current protests?  Did Olympia invite the supply ships to their port or were they forced on them by the US government?

Drew: Military shipments began in 2004, and have continued sporadically since then.  So far, this is the first combat brigade to go OUT through the Port of Olympia.  We have seen tanks and other weapons arriving in Olympia, but blocking them from re-entering the US seemed to us to be inappropriate, despite the fact we don’t support the Port profiting from the war.

The Port Commissioners have been asked if they had invited the military to use our Port, and they have been quoted in the local corporate newspaper to the effect that they did solicit the business of the military.  But I have not seen any memo or document which says this is the case, and I did not conduct the interview I remember.  I’m not sure I can even cite when it was published. . . .

Ron: What kind of support do you all sense for the current actions?  Do you think the current actions are crystallizing the contradictions of each citizen’s complicity in US imperialism?  Or are they just pissing people off across the board?

Drew: We have certainly angered many people who do not understand what we are doing, and they have been vocal about their misconceptions and their anger in many forums.  Some people who do know what we are attempting are also angry — but I have not heard from any of them directly.  No one I have read so far actually defends Empire.  Most are in denial that we are, in fact, complicit in supporting Empire through this use of our public property.  We have not had any polling done to see what the average responses would be.

Ron: What kind of charges are people being arrested on?

Drew: I was arrested at 3:15AM on Tuesday, May 23rd for Burglary, Second Degree.  I was held for 14 hours in Thurston County Jail and then charged with Trespassing, Second Degree.  I was released on personal recognizance until trial.  I have not yet received my court date.  Most others have been arrested by OPD (Olympia Police Department) or Thurston County Sheriff’s Department in the streets outside of the Port’s marine terminal, and were held for a few hours.  Some were not charged, and some were detained and released at the scene.  Most arrests have been for pedestrian interference.

Ron: These attempts to actually prevent material support to the US war reminds me of similar actions during the US wars on Vietnam and Central America.  The Vietnam Day Committee troop train blockades in the East Bay, the attempts to block trains in San Diego that Olympia resident Peter Bohmer was involved in, and the train blockades during the US wars in Central America that resulted in Brian Willson losing his legs are the examples I recall the easiest.  Do you think that these actions in Olympia can move beyond the primarily symbolic effect of the aforementioned acts?  If so, how?

Drew: We have not been destroying the crated material, damaging the combat vehicles, or dumping the cranes into the Sound, so the protests are likely to remain symbolic.  The only way I can see the actions move beyond that symbolic effect is if they are emulated all across the country and we start to have a national conversation about what we are doing locally to stop the war in Iraq.

Ron: How long do the groups organizing these actions intend for them to last?

Drew: As long as we draw breath and the military occupies our port.  We have only so far planned for the next day.  Each day, we change tactics slightly.  Each day we brainstorm new ways to make this work better.

Drew: We’re considering how to resist the arrival of a ship.  We’re frightened of the possibility that the Coast Guard will shoot us.  We’re trying to figure out how to accomplish one without the other.

Before I sent this article out, I received a short missive from an Olympia citizen named Rosaire.  The message was sent to me via Sandy Mayes, one of the members of the collective that publishes Olympia’s monthly alternative newspaper, Works In Progress.  Rosaire’s message provides another view on the nature of the protests and the response from Olympia’s citizens.

Rosaire: Hi Ron, I only have a few things to add to Drew’s comments.  I would like to add that the response from the majority of people has been positive.  Throughout this campaign many people have gathered at intersections — myself one of them — with signs protesting the war.  The support from drivers has been very supportive.  There are a few middle fingers and “get a job”s, but they are few compared to the number of thumbs-up and two-fingered peace signs.  Also, I have a few words to say about the symbolic nature of the civil disobedience.  I agree with Drew, that if this is going to be effective in the terms of actual stoppage, that more people throughout the country need to be doing these actions, but I would also add that we need to draw in more from the Olympia community too.  Right now, these activities are being done by a handful of very dedicated people, and for the most part, the arrest have been completely spontaneous — which can be both good and bad.  We don’t just need more actions, but must also improve on the quality of our actions — both in the terms of numbers and forethought.  For those reasons, I think it is a bit fanciful to view the main objective of these actions as stoppage, and judge it as such.  Currently, that goal just is not possible.  Instead, I think we ought to view the main objective of these actions as inspiration to others — as a shot hear around the world, or at least in our community.  We are setting an example that others can mimic, draw from, and improve on.  Judged in those terms, I think we are being, and will continue to be, quite successful.

Ron: Thanks a lot and keep up the good work. May there be many more such actions across the country.