One of Germany’s greatest living actors, a stubborn old character who always refused to renounce his communist principles, 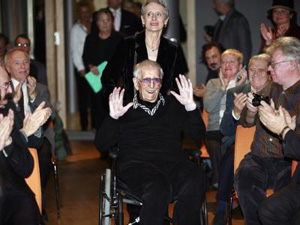 just hit the amazing age of 100 years!  Though he gave up his acting career once and for all about nine years ago, Erwin Geschonneck, now confined to a wheel chair but mentally still active, was given a gala birthday party in the Academy of Arts building in Berlin, next to the Brandenburg Gate.

Geschonneck, born in the former East Prussia on December 27 1906, grew up as a working class kid before World War One in a poverty-stricken area of Berlin.  In the turmoil of the Depression, his brother became a Nazi while he became a communist — and immigrated to the Soviet Union when Hitler came to power.  He acted there in a German-language company until Stalin decided to disband the group and deported the actors.  Geschonneck landed in Prague where he was caught by the Nazis in 1939 and spent the remaining years of fascism in concentration camps.  In the last days of the war the Nazis marched the dwindling number of survivors from his camp to the Baltic coast and onto a ship, the Cap Arcona, which they expected the British to bomb, since they could not know that only prisoners were on board.  When the ship sank, 4,000 were drowned.  Geschonneck was one of the 350 able to swim to shore.

After a few years in Hamburg, Geschonneck moved to East Berlin, where he was quickly hired for his new theatre by Bertolt Brecht, who tried vainly to keep Geschonneck when he switched to film-making with DEFA, the East German film company.  With his slightly sardonic but always interesting face, he proved his ability to play all kinds of roles, from nasty baddies to true heroes.  His first big success, with frightening make-up, was in a classic fairy-tale film for kids — and their parents. 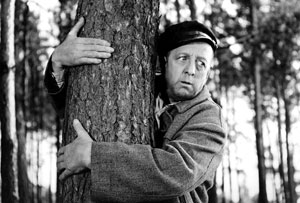 His next success, a great comedy, was about a factory worker in the first post-war years who takes some black-market carbide, needed to get his Dresden factory working again, on a boat down the Elbe river, the borderline between East and West, alternately saluting the armed American and Soviet guards on either side of the river.

Perhaps his greatest roles were in two great anti-fascist films, Naked among Wolves, about a little Jewish boy whose survival in Buchenwald concentration camp was organized by the international underground prisoners’ group, 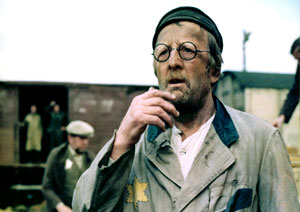 a story based on fact, and his co-starring role in Jacob the Liar, about a Jewish ghetto in Poland near the end of the war, and its hopes for survival.  The film was nominated for an Oscar and was later remade (weakly, unfortunately)  in Hollywood.

Until he was over ninety, he remained the star of many a gathering where he would sing humorous old Berlin songs.  His final film was directed by his son.  For years he strolled around in the streets of East Berlin, always offering a friendly response to any greeting.  East Berliners, and evidently a growing number of West Berliners as well, came to love this native son, who kept his views and his principles up to the present day.