OAKLAND, CA — Of all the supporters of corporate immigration reform, Homeland Secretary Michael Chertoff is the most honest.  The day of the notorious raids at the Swift and Co. meatpacking plants, he told the media they’d show Congress the need for “stronger border security, effective interior enforcement and a temporary-worker program.”  Bush wants, he said, “a program that would allow businesses that need foreign workers, because they can’t otherwise satisfy their labor needs, to be able to get those workers in a regulated program.”

Chertoff is hardly the only voice in DC using raids to justify guest worker programs.  Cecilia Muñoz, head of the National Council of La Raza, is another.  Those deported in December were among the millions of undocumented workers who came after Congress passed the last immigration amnesty in 1986.  Since legislators at the time didn’t consider people who would come in following years, “perhaps the most tragic consequences are the terrible human costs of workplace raids,” she says.  New guest worker programs will give future migrants legal status, she claims, and protect them from the migra.

The raids do cause terrible suffering.  But Muñoz and other Washington insiders actually supported bills last year that mandate the same worksite enforcement Chertoff carries out today.  More raids were a price they were willing to pay (or that others would pay) for the guest worker programs they wanted.

Today, many Congressional leaders, Democrats and Republicans, want to allow corporations and contractors to recruit hundreds of thousands of workers a year outside of the US, and put them to work here on employment-based visas.  Labor schemes like this have a long history.  From 1942 to 1964 the bracero program recruited temporary immigrants, who were exploited, cheated, and deported if they tried to go on strike.  Growers pitted them against workers already in the country to drive down wages.  Cesar Chavez, Ernesto Galarza, and Bert Corona all campaigned to get the program repealed.

Advocates of today’s programs do everything they can to avoid association with the bitter “bracero” label.  They used “guest worker” until that name also developed an ill repute.  Now they prefer other euphemisms — workers on “employment visas,” “essential workers,” or just “new workers.”

We don’t live in a magical world, however.  You can’t clean up an unpleasant reality by renaming it.

Current guest worker programs allow labor contractors to maintain blacklists of workers who work slowly or demand their rights.  Anyone who makes trouble doesn’t get rehired to work in the U.S. again.  Public interest lawyers spend years in court, trying just to get back wages for cheated immigrants.  The Department of Labor almost never decertifies a contractor for this abuse.

Guest workers labor under the employer’s thumb.  Standing up for a union or minimum wage is risky.  Under current programs, and in the new Congressional proposals, if workers lose their jobs they have to leave, making deportation a punishment for being unemployed.  No one gets unemployment insurance, disability, or workers’ compensation payments.  Companies save money and avoid bad publicity by sending injured workers back home, where healthcare is virtually unavailable.

But Muñoz and others argue that Congress can allow guest workers to go to court.  Our legal system is such a poor protector of workers’ rights today, however, that in 30% of all organizing drives workers (both citizens and immigrants) are illegally fired, with virtually no remedies or penalties on employers.  Arguing that lawyers can protect immigrants on temporary work visas is preposterous.

By their nature, guest worker programs are low-wage schemes, intended to supply plentiful labor to corporate employers, at a price they want to pay.  Companies don’t recruit guest workers so they can pay them more, but to pay them less.

According to Rob Rosado, director of legislative affairs for the American Meat Institute, meatpackers want a guest worker program, but not a basic wage guarantee for those workers.  “We don’t want the government setting wages,” he says.  “The market determines wages.”

Major Senate sponsors of guest worker bills don’t believe the government should even set a minimum wage for anyone, immigrant or citizen.  John McCain, John Cornyn, James Kyl, Larry Craig, and Chuck Hegel all just voted for an amendment to repeal the Federal minimum wage entirely.  Making them responsible for guest worker wages is putting the fox in charge of the chickens.

And it’s not just wages.  The schemes create a second tier of workers with fewer rights and less job security.  They have none of the social benefits US workers won in the New Deal — retirement, unemployment and disability insurance.  Instead of including new immigrants in these and other social programs, giving them legal residence and rights, Congress would create a huge workforce without them.  Corporations that have pushed for eliminating these standards for everyone would be halfway there.

The corporate lobby made other inroads as well.  John Gay, who heads the National Restaurant Association and EWIC, is now board chair of the National Immigration Forum, a major Washington player.  NCLR’s list of corporate sponsors includes Wal-Mart and 14 other multinationals.  Even two unions, the Service Employees and UNITE HERE, supported the Senate guest worker compromise last year.

The question Congress is deciding isn’t “what can stop immigration.”  With over 180 million people in the world living outside their countries of origin, nothing can.  Migration begins when people are displaced.  In the countries that are the main sources of migration to the US, most is caused by economic dislocation — people can no longer survive as farmers or workers.  Other migrants fled the wars that raged in Central America.

NAFTA, CAFTA, and U.S.-sponsored economic reforms, along with U.S. military intervention, uprooted millions of people, leaving them little option other than coming north.  Corporations like Wal-Mart and Marriott wrote U.S. trade policy to improve their investment opportunities abroad.  Now they also want guest worker programs to channel people displaced by those policies into their U.S. operations.  Often those leaving home are among the most skilled and educated.  Their departure makes it even harder for their countries to progress.

This flow of forced migration may not stop in the near future, but changing pro-corporate trade policies would reduce the pressure on people to leave home.  Unsurprisingly, that’s not on EWIC’s agenda.

The real question Congress is deciding is the status of people once they’re here.  Other proposals, from outside the Beltway, would give immigrants far greater rights, and much more equality, than employment-based visa programs.  Congress could, for instance,

It’s not likely that many corporations will support such a program.  That’s why those who claim to represent the interests of immigrants in Washington must choose whose side they’re really on. 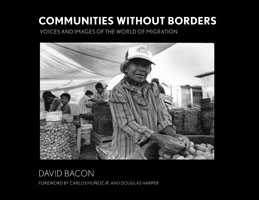 David Bacon is a photographer and journalist on labor issues.  His new book Communities without Borders: Images and Voices from the World of Migration (Cornell University/ILR Press) was published in October 2006.  Visit his Web site at dbacon.igc.org for his photographs and stories.