Perhaps you remember when Amnesty International’s journal printed as its lead story a laudatory review that liberal author Margaret Atwood wrote about Reading Lolita in Tehran.  Neither Amnesty nor Atwood nor Jacki Lyden, who promoted the twisted account of life in Iran on National Public Radio, bothered to mention the author’s close ties to warmongers like Bernard Lewis and Paul Wolfowitz.

A similar fraud is unfolding this summer.  Singer and former Miss Canada, Nazanin Afshin-Jam, is on a U.S. tour this month to sell her new CD and promote “human rights” and world peace at selected Borders Books stores coast to coast.   That should be good news — she is good-looking, articulate, and, like Atwood, has all the right liberal connections.  The music label’s web page features her solemn declaration in Persian and English that

“Nazanin is an independent.  She is not part of any political group, association or organization.  She helps all groups and individuals who are working towards human rights, freedom and gender equality.”

In this photo from www.helpnazanin.com, Nazanin proudly joins Abbas Fakhravar, a self-described protégé of Washington Likudnik and hatemonger Richard Perle (the photo is also on display on Fakhravar’s blog).  Sitting between them is Iran’s corrupt Shah-in-waiting, Reza Pahlavi, who, as the original caption explains in Persian, hosted the private February 2007 meeting to advance “human rights” in Iran!!!

Pahlavi has close ties to the Israel lobby and openly supports trade sanctions against Iran. 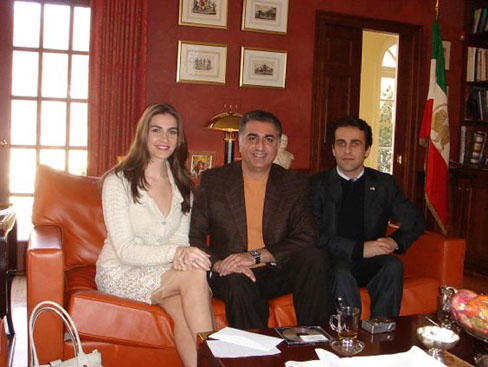 UPDATE: “With Defenders Like Nazanin, Who Needs Enemies?” Part 2