Vacationers visiting Baltic Sea beaches in the area have always loved the little small-gauge railroad affectionately called Mollie.  But during the G-8 summit of presidents and premiers, Mollie was strictly reserved for those directly connected with the conference in the swank hotel at the beach.  To all others it was definitely a No Go Zone.  Or was supposed to be.

But on June 5 a large group of protesters defied the restrictions.  Opponents of globalization, warners about atmospheric warming, supporters of the poor people of the world against the leaders of the wealthy countries outflanked police cordons and marched through fields of rye to block off the Mollie tracks for as long as they were able.  Like those blocking nearby roads, they were committed to action, but to peaceful, non-violent action.  Or at least most of them were.

For months, but especially for the last four or five weeks, most German media had been beating the terrorist drums, warning about the violent youngsters from across Europe who were out for trouble, and why they must be stopped.  Houses were searched, computers and other equipment seized, arrests were made, and there had been an endless series of changes on where and when demonstrations were to be permitted or forbidden, especially near the miles of high fencing topped with barbed-wire surrounding the conference site and larded with state-of-the-art electronic warning systems.  The changes continued up to the last moment and beyond, resulting in great confusion, near hysteria in the media, a somewhat smaller turnout than expected (80,000 showed up in the end), but a resolute decision by most protest participants to keep cool heads and not be provoked.

Among the crowd now determined to stop the Mollie were some from the so-called “Black Bloc,” protesters dressed in black clothes with hoods who had not pledged to non-violent tactics, and who had been involved in tough clashes with the police on the first day of the anti-G-8 protests on Saturday.  These had provided the expected giant headlines, the one-sided and exaggerated reports in most of the media.  But here they seemed peaceful.  The group which had crossed through the fields so dramatically wanted to avoid giving the police new opportunities to move in with their batons, water cannon, and the new big cages for arrestees.

But something was funny about four members of the black-clad contingent.  One of them, possibly the leader of the little group, wore a jacket with the red logo of a music group called “Slip-Knot,” popular with globalization opponents.  This was unusual, since the others avoided any details which would make them easily identifiable on police videos.  And then, as the line of cops took up position nearby, ready to end the blockade, it was these four who started picking up stones from between the railroad tracks and lobbing them over towards the police and shouting, “Get the bulls”!  Then one of the other protesters took a good look at the young man with the logo before he had a chance to pull up his bandana mask. 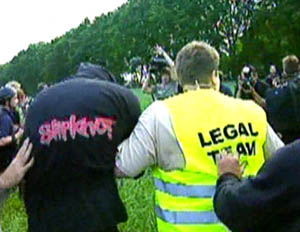 “That’s the same fellow who arrested me during a demonstration in Bremen last year!” he cried, and he and his friends made a grab for the four.  Two of the four made it to police lines, one disappeared, but they caught the one with the red logo, presumably the leader.  They did not treat him exactly gently, it must be admitted, but one of the group organizers took hold of the man, sheltering him from the crowd, and dragged him over and delivered him to the police line — and safety.

Although this episode ended the stone throwing, the police started up with their water cannon anyway, excuse or no excuse.

This was not the only indication that the police were using agents provocateurs, but it was the clearest and most dramatic.  Confronted with the facts, the authorities admitted having their men in black clothing (“fresh from the clothing store,” it was claimed by protesters), but insisted stubbornly that that they had been there only to observe what was going on, not to take part or provoke trouble.  The facts proved otherwise.

There were other, more violent episodes.  When Greenpeace members used small inflated boats to approach the summit beach and dramatize their demands against atmospheric pollution, speedy German police boats moved in to stop them.  One scene made it onto TV — it showed a police boat turning sharply and riding right over the Greenpeace vessel, overturning it and injuring the two in the boat, who could easily have been drowned.

Other frightening images included photos of the big, open cages, reminiscent of Guantanamo, in which some of the hundreds arrested were temporarily “deposited.”  In the end, very few protesters could be charged with anything, and the number of injured policemen originally reported — in the hundreds — was also sharply reduced.  But the media and the politicians had the basis for new demands that everyone in the country, first and foremost the non-citizens, be fingerprinted, photographed, documented, and controlled.

The participants in the G-8 summit, the presidents and premiers, had accomplished very little; no binding deadlines against pollution, no definite financial sums for fighting AIDS, nothing really accomplished beyond the smiling photos of Merkel, Bush, Putin, Blair, the new man Sarkozy, Abe, and the others.

And yet something had been accomplished.  A very large number of organizations opposed to the policies of the wealthiest and most powerful governments, including the Merkel’s German government, had joined together in a common action.  They ranged from usually tame but occasionally more active grass roots groups of Greens all the way to the militant “Make Capitalism History” bloc, most of whom dressed in black.  They had all camped together, demonstrated together, often sung together, sometimes with leading musicians, and had also taken part in what was called the Alternative Summit, with countless meetings and discussions aimed at moving towards common policies and resistance methods.  One point of debate was the degree to which action, even violent action, was tolerable: some pointed out that Bush and Blair were guilty of war crimes so terrible that throwing paving stones seemed child’s play in comparison.  No final agreements were made, but the scattered movements moved closer together.  The potential seemed stronger than usual.

Two side notes were of interest.  When Walden Bello, a sociology professor from the University of the Philippines, spoke at the opening rally, he warned that at previous protests the question of the Iraq war and a possible attack on Iran had been underestimated or ignored.  The translation was not too good, but when he said something like: “We must bring the war right into this meeting,” it was clear to all who heard him that he meant a discussion of the Iraq war and was not calling for violence at Heiligendamm.  A news agency twisted the meaning, undoubtedly maliciously, and the media trumpeted this alleged “call for violence” to the world.  The almost immediate correction by the protest organizers against the false translation and nasty interpretation was ignored for many days and then — if noted at all — hidden in the back pages.

A second note: the two leftwing parties, PDS (Party of Democratic Socialism) and WASG (Electoral Alternative for Jobs and Social Security) were strongly represented in both the demonstrations and the Alternate Summit discussions.  The PDS has not always played such an important role in similar movements in the past; but this time some of its Bundestag members and many members were closely involved and its top leaders made their positions clear in several TV talk shows.  This increased level of activity would seem to be a good omen for the new party to be founded this coming weekend, when the PDS (largely East German) and the WASG (largely West German) join to form a new united party, Die Linke (The Left), which already has the careerist politicians of the Social Democratic Party, now tied into the government coalition with Merkel’s Christian Democrats, desperately trying to recapture lost ground and prove that they, too, despite all appearances, are really in favor of working people’s rights.  It could be a hot summer.