Two of my friends were just beaten and arrested by Brooklyn police.  My friends, Michael Tarif Warren and Evelyn Warren, are African-American attorneys whose work consists, in part, of defending victims of police violence.  I want to tell you about how police punched and humiliated these good people on the corner of Vanderbilt and Atlantic, in their own, predominantly Black neighborhood on June 21st; about Tarif’s clothes being torn almost off — I don’t want you to miss a thing.  But many facts must wait until the Warrens’ trial.  Here, excerpted from a legal brief, is how Tarif describes what happened:

“At approximately 5:45pm, petitioner and his wife were in their vehicle, stuck in traffic, when they saw members of the New York Police Department apprehend a young man, handcuff him, and physically abuse him while he was prone on the ground.  Petitioner and his spouse exited their vehicle to inquire why police were engaging in that behavior, but immediately returned when ordered, without getting near the police or the young man.  Sergeant Steven Talvy, however, approached the petitioner and his spouse and, after they identified themselves as attorneys, proceeded to strike petitioner numerous times in the head and face and strike petitioner’s wife in the face.”

Sergeant Talvy handcuffed Tarif and pushed him into the police van.  Evelyn, though “stunned,” remembered her legal training and walked toward the mostly African-American crowd of onlookers:

“I said, ‘Did you see what was happening?’  Naturally, they did.  All these people had poured out of a nearby McDonalds, plus it’s rush hour and traffic was deadlocked.  I say, ‘Did anybody take photographs?’  They said, ‘Look at your jaw.’

I saw Evelyn three days later; her jaw was still swollen.  It could have been worse: Seeing that Evelyn was trying to retrieve her confiscated driver’s license, Sergeant Talvy ordered police to throw her to the ground, but the onlookers’ shouts stopped them.  Evelyn and Tarif were taken to Brooklyn’s 77th Precinct.

“We were lined up against the wall with other prisoners. Tarif’s clothes were ripped and falling off him.  I will never forget, there was this blond officer in Talvy’s unit — they were laughing together — and the guy said, ‘What’s this, a strip show?’

“You have to remember that Tarif and I were involved because the police were kicking this young man viciously.  He was Black; probably around 18.  His face was a bloody mess.  Obviously, Talvy thought he could get away with it because he said, ‘Well, it’s your word against mine.  Let’s see what happens.'”

What happened was that Tarif was charged with Obstructing Governmental Administration, Disorderly Conduct, and Resisting Arrest; Evelyn, with Disorderly Conduct.  Reactions poured from the Black press and community; there was almost no coverage from mainstream media; and a resounding silence still emanates from the New York Times.

Three weeks later, I visit Evelyn at home.  She tells me how she’s fighting to put her life back together:

“I grew up before segregation ended.  My father was a contractor, a small-business person.  He used to go to Mississippi to work.  And every time he would leave for Mississippi, my mother would cry.  So I recognize racism.

“I guess I was raised to be the best I could be in whatever I chose to do — by being the best, I could overcome certain conditions.  I was foolish enough to believe that.  I still know my value, but this incident tells me that they don’t know my value — whether you’re a kid wearing baggy pants, or a lawyer wearing a suit and driving an upscale vehicle — it doesn’t matter to them.

“I should have been more aware of this.  Tarif and I represent police brutality victims.  I’ve heard accounts and seen the evidence, but to experience it firsthand — it’s earth-shattering.  So I have a new appreciation for what people go through.  While you live in a world that’s in turmoil, you still have a little corner where you feel safe and secure.  I no longer have that.  Before this, I was concerned about what was going on in Iraq, Africa, Venezuela.  Now, I’m concerned about what goes on within ten blocks of where I live.

“Black people are hit harder by police than any other community — I know that.  Tarif and I went to a meeting last Saturday where, in the projects, Black people are accosted coming out their door.  Police say, ‘Let me see some identification.’  Now, if you’re coming out the door, you must have had some right to be there.  Unless you’re seen carrying a TV or stereo system, why should you show ID?”

I ask Evelyn what she wants white people to know.

“I want them to know that what I’m telling is the truth.  That any people of good moral standards should be concerned about law enforcement that’s out of control.  At minimum, they should ask questions of Police Commissioner Kelly and of Mayor Bloomberg: ‘What’s going on, here? This is unacceptable.’  If those officers knew they could face charges just like any civilian, they’d think twice.”

Then Evelyn says something that stops me cold:

And I realize that, like many white people, I have lived for years with the genteel, self-protective assumption that, if I believed hard enough that Black and White people are equal, then the world must be OK.  I realize it’s never been OK — that my friends are in danger — that our lives remain deeply divided.

“Tarif keeps saying this happened for a reason, that the Creator is on a mission here.  But my overriding emotion, aside from sadness and feeling powerless, is anger.  I’m determined to change things.  Because, if that officer can do what he did to us, in broad daylight, with 50 to 100 people watching — what happens when nobody’s around?” 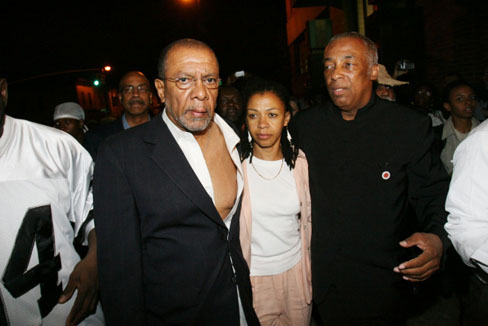