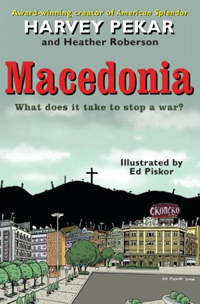 Readers who haven’t watched the award-winning 2003 film American Splendor may still recall a younger Harvey Pekar on the Tonight Show, attacking network-owner General Electric and being banished for his commentary.  Pekar is still on the offensive, and Macedonia offers readers of art comics a critical look at a tough question.  Scholar Heather Roberson, a peace activist, worked with Pekar on a script about the little land-locked country that has been constantly endangered since the breakup of Yugoslavia and the collapse of the Eastern Bloc.  It’s a complicated story, too complicated for many comics fans.  But it gives the subject a serious treatment and also hints broadly at what a new generation of nonfiction comic art can do, especially for young readers. 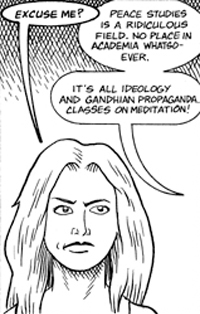 The narrative begins with Heather, a Peace Studies major, arguing with a Political Science professor over lunch.  The professor gives her the old line that war cannot be prevented . . . but then concedes that Macedonia, in the very tinderbox of the Balkans, managed to dodge the proverbial bullet.  She wonders exactly how Macedonia emerged unscathed and, after an extended conversation with her boyfriend on details of the Kosovo conflict, decides to go see the country herself.

Cut to real-life Pekar: while on tour for his latest movie, he meets Heather and, intrigued by her planned journey to Macedonia, proposes a book about it, which will become this graphic novel Macedonia.  Roberson heads for Macedonia as a near-penniless scholar-observer, seeing and sometimes staying with contacts that she made in the US.  A woman traveling by herself, she repeatedly gets sexually harassed, but she is too tough to be defeated by any harassment, or even by the warnings of extreme personal danger.  Once in country, she threads her way through the bureaucracy to find the few officials willing to speak to her at length.

So, how did Macedonia do it?  There are billboards promoting disarmament: “Give Up Your Guns So the Children Can Play.”  A good line, but doubtless as hard to enforce as it is difficult to make the country’s new judicial system accountable.  There are honest officials who have the honest naiveté to believe that Harvard experts on “civil society” really have good advice.  But, more often than not, they only learn by practice that engaging the public through ombudsmen creates possibilities for redressing matters like the crookedness of the cops.  Old habits and prejudices, like the supposed hopeless backwardness of Albanians or the Roma people, can be met with real services and job programs.

As it turns out, the Ohrid Agreement has worked, so far.  It’s as if a security structure that the old Soviet Union proposed in 1950, vetoed by the US, has since stumbled into existence.

I don’t think, though, Roberson ever solves the mystery of why Macedonia has escaped the worst of the horrors and may continue to do so.  Ethnic hatreds remain but seemingly do not get out of control — perhaps because of the community sense of the Macedonian majority . . . or it may be just luck.  Roberson herself adds an Epilogue that the US and the EU have no credible commitment to anything like democracy and cannot be expected to support Macedonia except as a future profit-producer.  US attempts in particular to manipulate the Macedonians naturally extend into the foreseeable future.

And yet there is hope.  In showing something so different from Joe Sacco‘s memorable art-comic visits to the warring Balkans, and something so intensely detailed, Pekar and Roberson, with their able artist Ed Piskor, may not have produced a best-selling comic.  But it is a volume significant for art, politics, and narrative.  That should be plenty.