These little Commanders make delightful pets — provided they are no more than three inches tall.  Otherwise, these unruly pests can attack sovereign countries, overrun entire populations, and get hold of fissionable material, possibly blowing up the world.

We don’t think it’s good science to fight global warming with nuclear winter.  That is why we at MoveOnYouMurderousThugs.org have given up our email petitions and phone-in campaigns, and are working with expert gene-splicers to save the earth, using state-of-the-art cuteness.  Our motto: “If Ya Can’t Beat ‘Em, Shrink ‘Em and Sell ‘Em as Pets!” 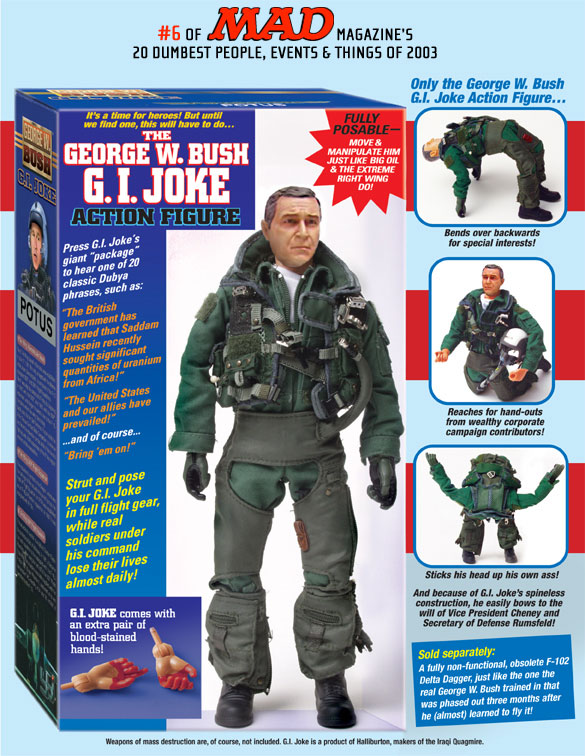 It’s fun and relaxing to observe the pugilistic antics of these tiny creatures, as they scream for help inside a glass jar with holes punched in the lid.  And so healthy, too!  Seeing your Commander finally out of the Middle East and under your control releases vital antioxidants into your bloodstream.

You’ll look better, feel better, as you realize that you are no longer forced to stand helplessly by and watch the genocide of yet another non-Christian people.  So enjoy your wee warmonger, and look for our line of tiny, bio-engineered Congresspeople, military contractors, and Executive Branch higher-ups — coming soon to pet shops near you!

When you arrive home, your pet will probably be all tuckered out from “ordering” you to let it go.  Place it gently inside its cage and allow it to rest in total isolation for a few days.  Give it a few drops of water and lots of Drano in its treat cup.  Be sure and leave paper on the bottom of its cage.  Shredded copies of the Patriot Act will do.

There is a popular myth that three-inch U.S. Military Commanders are difficult to tame — nothing could be further from the truth!  Moving slowly and quietly, so as not to startle your pet, reach into its cage and attempt to stroke its medals.  Chances are your Commander will snap at you with hurtful epithets such as: “Unhand me, faggot,” or “Bitch, you can forget all about that troop reduction timetable.”

It is time to discipline your pet.  Grasping its torso firmly between the thumb and forefinger of your left hand, bring the little fellow out of its cage.  Now, slowly and gently crush its tiny head with the thumb of your right hand.  Uh-oh — too hard!  Bring out the electrical tape and bandage your pet, then hook it up to healing electrodes.  Explain to it that thousands of American and Coalition troops are trying to get well in situations far worse than this.  Repeat discipline as necessary.

FUN WITH YOUR PET

Now you are ready to accessorize.  Buy a colorful plastic Habitrail and watch your Pentagon play-toy frolic, just like a real hamster.  Then there’s the popular “Gitmo” terrarium, which offers a motivating environment in which your pet can endure life-changing encounters with tough GI-Joe guards.

Some owners get the most out of their action figures by putting their pets to work, making them run on little wheels that provide “green” power for cars and lawn mowers.  Other owners have trained their charges to perform tricks, such as standing for hours on coffee tables, holding amusing wires in their outstretched paws.  Still others have lent their Commanders to kids for science projects!  The little guys are so cute, trying to figure out which lever releases the pellet and which delivers the electric shock.

At the end of a hard day’s work, turn on your kitchen blender, so your pet can relax in a stimulating whirlpool bath.  Microwave dry.

Always return your pet to its cage and secure the door tightly when you are finished playing.  And make sure the cage is made of reinforced steel.  Top U.S. Military Commanders have been known to gnaw through bars of lesser metal and get lost for weeks inside attics, basements, and old Frigidaires.  Nothing is more repulsive than seeing the wheezing head of some tiny war criminal pop out from your radiator, its tongue all blackened and dangling.  They really make a mess, too, if you step on them.

Caution: Escapees can be dangerous.  One pet Commander ran away from its home in Mission Hills, Kansas.  It showed up a week later, dressed in a tasteless Storm Trooper costume, and tried to murder everyone with a cheese grater.

Ridiculous urban legends abound of people who, tired of their tiny Commanders, flushed them down the toilet, where their pets grew into gigantic reptiles, returned through the plumbing, and bit off their owners’ genitalia.  HA HA!

These stories are absolutely true.  If your pet has lost its cachet, please do not flush.  Neither should you donate it to live bait shops, as this could introduce harmful toxins into our lakes and streams.

The most ecological thing to do is to return your pet to our laboratories.  There, we will take your Top U.S. Military Commander down to our storage room, place it in a vault containing 655,000 photos of the Iraqi dead, turn out the lights, close the door — and leave.