We, South Africans who faced the might of unjust and brutal apartheid machinery in South Africa and fought against it with all our strength, with the objective to live in a just, democratic society, refuse today to celebrate the existence of an Apartheid state in the Middle East.  While Israel and its apologists around the world will, with pomp and ceremony, loudly proclaim the 60th anniversary of the establishment of the state of Israel this month, we who have lived with and struggled against oppression and colonialism will, instead, remember 6 decades of catastrophe for the Palestinian people.  60 years ago, 750,000 Palestinians were brutally expelled from their homeland, suffering persecution, massacres, and torture.  They and their descendants remain refugees.  This is no reason to celebrate.

When we think of the Sharpeville massacre of 1960,

we also remember the Deir Yassin massacre of 1948.

we remember the bantustanisation of Palestine by the Israelis.

When we think of our heroes who languished on Robben Island and elsewhere,

we remember the 11,000 Palestinian political prisoners in Israeli jails.

When we think of the massive land theft perpetrated against the people of South Africa,

we remember that the theft of Palestinian land continues with the building of illegal Israeli settlements and the Apartheid Wall.

When we think of the Group Areas Act and other such apartheid legislation,

we remember that 93% of the land in Israel is reserved for Jewish use only.

When we think of Black people being systematically dispossessed in South Africa,

we remember that Israel uses ethnic and racial dispossession to strike at the heart of Palestinian life.

When we think of how the SADF troops persecuted our people in the townships,

we remember that attacks from tanks, fighter jets and helicopter gunships are the daily experience of Palestinians in the Occupied Territory.

When we think of the SADF attacks against our neighbouring states,

we remember that Israel deliberately destabilises the Middle East region and threatens international peace and security, including with its 100s of nuclear warheads.

We who have fought against Apartheid and vowed not to allow it to happen again can not allow Israel to continue perpetrating apartheid, colonialism and occupation against the indigenous people of Palestine.

We dare not allow Israel to continue violating international law with impunity.

We will not stand by while Israel continues to starve and bomb the people of Gaza.

We who fought all our lives for South Africa to be a state for all its people demand that millions of Palestinian refugees must be accorded the right to return to the homes from where they were expelled.

Apartheid was a gross violation of human rights.  It was so in South Africa and it is so with regard to Israel’s persecution of the Palestinians!

NB: Organisational affiliations above are for identification purposes only and do not necessarily reflect organisational endorsement. 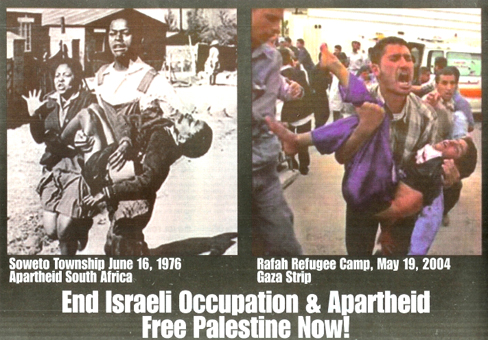