Well before the financial crisis broke out so violently in the US and caused ripple effects all over the world, most people in developing countries were already reeling under the effects of dramatic volatility in global food and fuel markets.  In 2007 and 2008 prices of most primary commodities first increased very rapidly, to a degree that was completely unwarranted by actual changes in global demand and supply.  Then they collapsed, from peaks in May-June 2008, at even more rapid rates than their previous increases.  But in many countries the fall in global prices was not associated with a fall in prices paid by consumers, while the actual producers (such as farmers) rarely benefited from the price increases.

It is now quite widely accepted that financial activity — specifically the involvement of index investors — was strongly associated with these dramatic price movements.  Commodities emerged as an attractive alternate investment avenue for financial investors from around 2006, when the US housing market showed the initial signs of its ultimate collapse.  This was aided by financial deregulation that allowed purely financial agents to enter such markets without requirements of holding physical commodities.  This generated a bubble, beginning in futures markets that transmitted to spot markets as well.

Thereafter — even before the collapse of Lehman Brothers signalled the global financial crisis — commodity prices started falling as such index investors started to withdraw.  The global recession that was evident from mid 2008 led to perceptions that commodity prices would not firm up any time soon.  While this contributed to fears of deflation in the context of liquidity trap conditions, this was even seen to be an advantage especially for food and fuel importing developing countries, whose import bills would be reduced accordingly.

But while the collapse in commodity prices after the recent peak was sharp, it proved to be quite short-lived.  Most important commodity prices — especially food and oil prices — have been rising from early 2009, even before there was any real evidence of global ”recovery”. 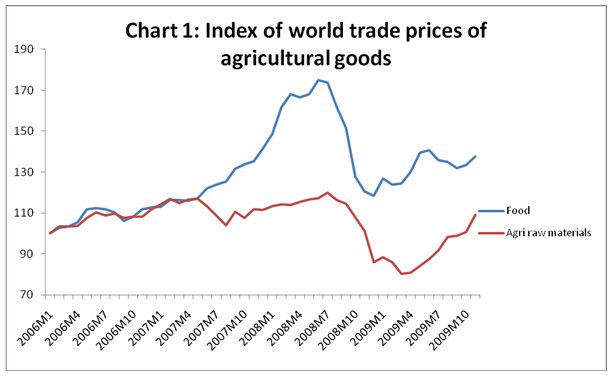 Chart 1 shows that global food prices, which nearly doubled between June 2007 and June 2008, fell very sharply thereafter and were back to the June 2007 level by December 2008.  But thereafter they have been rising once again, such that the increase between December 2008 and November 2009 has been more than 16 per cent on average across all food commodities.  Agricultural raw materials prices did not rise as quickly and fell more in the second half of 2008, so their recent price increase has been sharper, close to 35 per cent in the seven months between May and November 2009.  But this means that they are on average only just back to the level of two years earlier.

Other non-agricultural primary commodities — metals and other industrial inputs — showed less price increases during the 2007 commodity boom, more volatility over the course of 2008 and sharper falls thereafter, so that by the beginning of 2009 their prices were below those of January 2006 (Chart 2).  But these prices have exhibited particularly pointed recovery since then, increasing by more than 50 per cent in the case of metals between March and November 2009, and by 43 per cent in the case of other industrial raw materials. 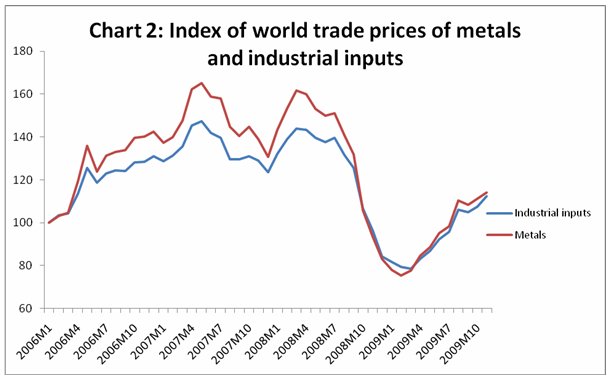 Of course energy prices are particularly crucial, and here the recent trend in both all fuel prices (including coal) and only petroleum prices has been quite marked as well.  Chart 3 shows a picture of great volatility, but the extraordinary price increases of 2007 to mid 2008 and the subsequent fall tend to reduce the attention to more recent trends.  Thus, in the eleven months of 2009 for which the data are now available, fuel prices have increased by 53 per cent and oil prices have increased by 88 per cent.  In any other period such increases would be the object of widespread attention and the subject of endless commentary.  But because we live in such ”interesting times”, with a recent history of even greater and more rapid increase and decrease, they have largely gone unnoticed. 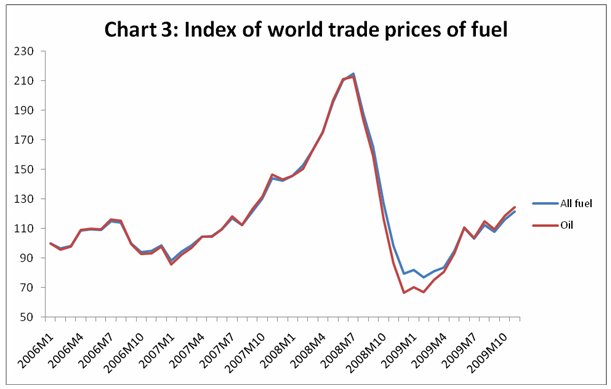 Why is this happening?  And what does it portend for the future?  It was noted earlier that the recovery in most primary commodity prices actually predated the global output recovery.  As was the case in the previous price surge of 2007-08, these recent price increases are unlikely to be related to any real economy changes in demand and supply.  Despite some supply shocks in particular crops, according to the FAO most agricultural goods in 2009 showed approximately the same demand-supply relationships that existed in the previous years, with no force making for any significant upward or downward price trend.  So if prices are increasing, it must be because of the effect of expectations combined with heightened speculative activity in commodity markets, especially in commodity futures.

Indeed, there is no reason for such speculation to be curbed at present; if anything, the low interest rates that are being maintained by most major economies as part of the recovery package, combined with the immense moral hazard generated by the large financial bailouts, are likely to have made the appetite for risky behaviour much larger.  Both gold and other primary commodities are once again emerging as prime areas of interest for financial institutions, and some of the large (and successful) financial players such as Goldman Sachs are expanding or opening new commodity investment sections. 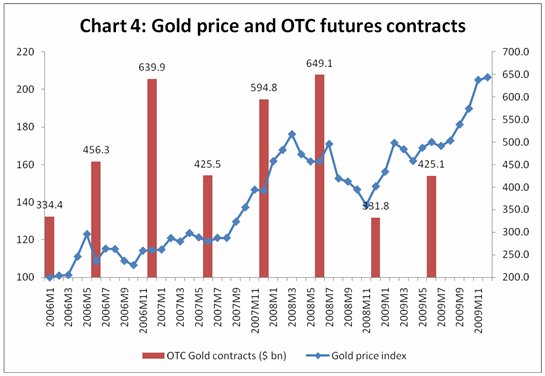 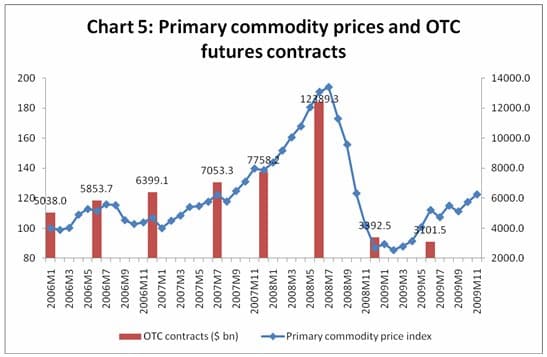 As Charts 4 and 5 indicate, the value of OTC (over the counter) futures contracts in both gold and other commodities has tended to track spot price movements.  Since OTC contracts do not occur in regulated exchanges (and in any case effective regulation that would constrain speculative activity in commodity futures is not yet in place in any of the major financial centres) such activity still has the potential to cause wild swings in commodity prices that are not justified by any fundamentals.

This creates a piquant situation for economic policy.  In macroeconomic terms, the global threat of deflation is still greater than that of inflation, especially because the financial crisis is far from resolved or even properly dealt with and is bound to result in new problems in real economies sooner rather than later.  However, both the nature of the recent recovery and the policy response to the crisis (which has provided more liquidity without adequate control or regulation) suggest that primary commodities may well witness a price surge once again.

Such price surges have huge negative implications for developing countries.  Because they are the result of financial activity, they typically do not benefit the direct producers who may be resident in the developing world.  But they cause huge damage to consumers of food and other essential items, typically the poor in developing countries who are the worst affected as the prices of necessities increase even as their employment and wages continue to languish.

If these very adverse effects are to be avoided, financial regulation to curb speculative activity in commodity markets must become an urgent priority at both national and international levels.  The governments of large developing countries that are now beginning to flex their muscles at various international fora would do well to recognise the critical urgency of such measures, if they really want to benefit their own people in international negotiations.