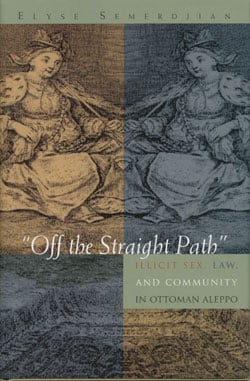 The content of Off the Straight Path is less juicy than its title suggests.  The reader with an appetite for stories of sexual scandals and dangerous liaisons of people now long dead will not have her/his gossip-driven curiosity satisfied.  But, it is precisely the seriousness of the project and its honest and responsible execution that renders it thoroughly admirable.

Based on juridical writings, fatawa literature, imperial laws, and court records from Aleppo (the last spanning four centuries), the book is divided into two parts, of two and three chapters each.  The first part deals with legal discourses surrounding the category of illicit sex.  Chapter 1, “Zina in Islamic Legal Discourses,” treats the sources and content of Islamic law on the subject, specifically the core Hanafi juridical texts consulted in Syria at the time.  The second chapter, “Zina in Ottoman Law,” examines the kanunnames (imperial laws), and fatwas (juridical opinions) with a special focus on the works of Ebu’s Su’ud, the Ottoman chief mufti under Suleyman I.  The second part of the book, on law in practice, begins with chapter 3 on “People and Court: Policing Public Morality in the Streets of Aleppo.”  This demonstrates the self-policing functions exercised by the local community, which felt entitled to apprehend transgressors of public morality and used the court to have violators expelled from their midst.  The next chapter, “Prostitutes Soldiers, and the People: Monitoring Morality through Customary Law,” focuses on the structure and patronage of prostitution and its treatment in the Aleppo courts.  The fifth and final chapter, “In Harm’s Way: Domestic Violence and Rape in the Shari’a Courts of Aleppo,” examines the law and its practice regarding cases of rape and domestic violence.

Semerdjian opens the book with a discussion of zina (“any sexual intercourse between persons who are not in a state of legal matrimony or concubinage,” p. xvii) as a criminal legal category in Islamic law.  Zina is subsumed under the handful of hadd crimes, for which punishment is fixed in Islamic law, therefore binding the judge against use of discretionary punishment (ta’zir).  In shari’a, the prescribed punishments for zina are stoning to death or flogging, depending on the marital status of the violator.  However, Ottoman law commutes punishment from the level of the corporal to a system of fines (and a class-sensitive one at that, in which fines are measured against the wealth of the violators).  Practices at the law court in Aleppo often differed from Ottoman legal provisions.  For example, most cases involving moral violations (including prostitution and procuring) involved the banishment of the offender from a certain neighborhood at the behest of the community.  While such variances between theory and practice have frequently been noted by Ottomanists, Semerdjian is not satisfied with merely highlighting the differences.  Rather, she delves into the minutia of Islamic law in order to demonstrate the ways in which Ottoman jurists and Aleppan judges might have reconciled rulings and practices to issue far less draconian punishments than those prescribed in Islamic law.  How was the harmonization effected?

Legal loopholes are volunteered in the very sources of the law.  The evidentiary requirement of testimony by four adult males, or a four-time confession by the guilty party, to prove a case of zina is difficult to establish.  Indeed, the hadith literature itself goes to great lengths to provide exit strategies from hadd punishment.  These are found in various manifestations, whether in the statement of the Prophet “‘[s]eek a pretext to prevent punishment according to your ability'” (p. 12); or in instances in which the Prophet himself is purported to have attempted to dissuade a fornicator from confessing his crime.  Clearly, this equivocation provided ample room for future jurists to maneuver around corporal punishments.  Consequently, Ottoman imperial law (the subject of chapter 2) utilizes the principle of “judicial doubt” as a loophole.  The strong focus of Ottoman law on intent as a necessary requirement for establishing guilt further allowed the judge to override the strict evidentiary requirements found in Islamic law.  Courts in Aleppo harmonized with Islamic law in slightly different ways.  Semerdjian suspects that embedded in the use of “euphemisms” was a legal strategem.  The cases brought before Aleppine judges were transcribed in the records through various vague formulaic phrases denoting all manners of moral violations, including prostitution (labeling them “evildoer,” “harmful to the neighbors,” “morally repugnant,” pp. 95-96).  Semerdian speculates that by avoiding the use of the term zina, and its substitution with other monikers, judges were able to evade rules of evidence, while simultaneously allowing for the entry of circumstantial evidence (rather than the requisite four testimonies or confessions) to prove the case.  This freed the judge to use discretionary punishment (rather than hadd punishment).  In short, “[e]uphemisms allowed for flexibility in the adjudication process” (p. 99).  In addition to the use of euphemisms, the two basic legal principles of istihsan (preferred result) and istislah (public interest), frequently used to justify customary law, also played a primary role in circumventing hadd punishment and admitting local collective will.

Collective will is related to the second theme treated in the book: the self-policing role of the community at the neighborhood or crafts/guilds levels.  This is reflected through the en masse testimonies at court against violators of public morality.  Contrary to previous interpretations of this communal phenomenon as an effect of Ottoman coercion, Semerdjian argues that it constituted “an attempt for the community to police itself in place of a weak administration” (p. 85).  This capacity of the community to apprehend moral offenders empowered its underprivileged members to find strength in unity against socially powerful individuals.  However, it was also open to abuse and provided a mechanism for the persecution of undesirables such as poor Paolo the Frank (a Venetian?), who was evicted on moral grounds though the real reason might have been his refusal to meet his landlord’s demand for a higher rent.  Ultimately, the people’s use of the court established “the validation of the community’s collective will” (p. 137) and revealed the receptiveness of the court to that community’s needs and desires.  The working of the court, then, was not dictated by the arbitrariness of a Weberian kadijustiz, but founded on continued use of “legal reasoning . . . [and] the living law in Muslim communities” (p. xxiii).  Given this cooperation between the court and the local community, it is surprising that prostitution continued and even increased in the eighteenth century.  Semerdjian suspects that it came from an entirely different quarter: the soldiers who filled the ranks of the levend (irregular troops) and some Ottoman high officials.  This connection between prostitutes and soldiers, according to the author, may have led rulers not to authorize or heed calls for morality campaigns against prostitutes.

The third focus of Semerdjian’s book and one that informs her explicit political agenda is related to Islam and gender.  At various points throughout she addresses certain brands of Muslim revivalists who suffer from “historical amnesia” (p. 160) and who have selectively chosen to revive certain alleged Islamic traditions such as punishment by stoning (as in recent cases in Iran, Nigeria, United Arab Emirates, and Saudi Arabia).  She also addresses the discourses of classical Orientalists, their current reincarnations, and their sensationalist Muslim women heroes (such as Irshad Manji and Ayaan Hirsi ‘Ali) to counter their conceptions of the purported rigidity and harshness of Islamic law and its violence against women.  One of Semerdjian’s goals is to challenge their assumption that rape was not a legal category distinct from consensual illicit fornication, by showing how jurists and judges used a clear terminology for “non-consensual zina, that is, rape” (p. 145).  Not only do all legal schools agree that women are not to be punished for being victims of rape, but some jurists prescribe hadd punishment for the offender and a compensation for the victim.  Despite the clear sympathy to the victims of rape in the legal literature, evidentiary requirements were difficult to establish, partly due to the different values assigned to the testimony of a woman against that of a man.  In cases of domestic abuse, Semerdjian shows that despite Qur’anic sanction of wife-beating (if other forms of persuasion fail), the exegetical and legal literature generally ruled to the advantage of the wife/victim on the basis of the legal category of “harm” suffered by the wife, a principle which the Aleppo courts seem to have followed.  Indeed, the outcome of most cases brought to court by women was successful and their marriages annulled.

Semerdjian ends her study with a telling anecdote: the only instance of stoning that happened in Syria “was not for zina but for the crime of spreading the revolutionary doctrine of Christianity. . . .  [It] was performed not by Muslims but by Romans” (p.158).  The choice of this anecdote betrays one of Semerdjian’s strategies throughout her book, which is to reveal the pre-Islamic origins (Mediterranean and Mesopotamian) of many practices that had come to stereotypically represent and exclusively define Islam.  Between the exposition of the law, its practice in Aleppo, and the revealing of non-Islamic roots of the law, Semerdjian successfully achieves her political agenda of dispelling definitive stereotypes.

My only criticism of the book has to do with Semerdjian’s frequent digressions, whose purpose is probably to inform the non-specialist and to exhibit utmost responsibility and transparency.  For example, in her discussion of Islamic law, she describes the development of Islamic law from its beginning and includes the debate about the choice of the Hanafi legal rite by the Ottomans.  Another example is the exposition of the history of the Devshirme system, which is not particularly relevant to her larger argument.  Also, rather than including a brief discussion of her sources in the introduction, she offers a long — and almost defensive — discussion and defense of her use of the rather traditional source, the court record.  To the mind of this reader, while Semerdjian’s sense of responsibility is laudable, the relegation of these discussions to the footnotes would have provided for a smoother read and a more focused argument.

All in all, Semerdjian offers a thorough, judicious, and sober study, which is a welcome and valuable contribution to the fields of Ottoman and Islamic law and practice, gender in Islamic societies, and the social history of early modern Aleppo.

Dana Sajdi is Assistant Professor of History, Boston College.  This article was first  published by H-Levant (December 2009) under a Creative Commons license.