This document was created by the community of Isha L’Isha—Haifa Feminist Center.  It began as a process of examination and re-conceptualization of the term “security” as we, feminist women in Israel, experience it.  Over the past five years, Isha L’Isha has been discussing and dealing with issues related to women, peace and security.  The aim was to expose the situation of women living in war and help make their unique voices be heard.  In this context, we hoped to consolidate a political stance related to peace and to putting an end to conflicts — and this as a reaction to the repeated wars, which have become a norm in our region.  We wanted to examine the perception of security, which has become common in daily Israeli discourse, and to help expose the severe lack of security experienced by various groups in Israel, including women.

We believe that true security reflects the genuine needs of the citizens in a country — economic and welfare needs alongside social, environmental and political justice for all groups.  We believe that the practice of war and armament leads to pain and destruction beyond the boundaries of the battlefield, and that such practices do not contribute to our security; on the contrary, they only undermine it.

At Isha L’Isha, we perceive an interrelated connection between the narrow perception of security, based on military power, and an unequal distribution of state budgets.  This unequal distribution reflects the political and economic interests of a dominant minority, who at the same time increasingly continue to neglect social issues.

The perception of security in Israel is designed and controlled by interest groups that have political and economic power.  One of the ways they can attain legitimacy for their control and actions is to continuously disseminate and instill fear — real and imaginary — among the citizens of Israel.  This fear justifies and, in turn, foments military power and its use against any security threat, as defined by this elite group.

Senior officials, ministers, Members of Knesset (Israeli Parliament), military and intelligence officials, and other stakeholders continuously make very bold statements regarding “existential strategic threats” against Israel.  Decision-making in all areas related to security is characterized by secrecy and vagueness, excluding anyone who does not belong to the security elite.

As feminists, we wish to expose the connections between the policy of opacity, concealment and fear, and the current perception of security.  We want to take responsibility for our lives and for actions carried out in our name.  If the foreign publications are correct about nuclear production in Israel, then this is a clear example of the opacity and concealment policy being implemented in Israel.  Nuclear production is an issue most of us — men and women — know very little about, but which has crucial implications for our everyday life and security.

In this position paper, we hope to dispel some of the opacity surrounding the issue of nuclear weapons and nuclear facilities in Israel.  Since much more is concealed than is known, this document will attempt to answer the following questions:

Are Nuclear Weapons Good for Security?

Nuclear weapons, or any other weapon, cannot bring about security.  Weapons constitute a source of income, and they continue to fuel wars and serve the greed of economic military elites and their need for power.

Will Israel, in order to maintain its superiority in the region, attack every country that enters the nuclear armament race?  Will it attack Jordan, Egypt, Turkey, or Iran?  How many countries can we attack and until when?  Attacking neighboring countries, which are developing nuclear technology not only does not contribute to security but it also undermines it and increases tension and fear.

War is only one of the evils of militarism, and it does not end on the battlefield, but requires a ‘war system’: “On the national level it is in fact a scheme that requires ambition, practice, and placing society in a continuous state of readiness, while creating a system of values and beliefs that recognizes the use of military power as an appropriate solution for problems and for attaining political power.”  In a militaristic society, aggressiveness shapes civil norms.  In Israel, for example, men enjoy excessive rights and go from senior positions in the military to senior civil political and economic positions while women, who are marginalized in the military, remain marginalized in their civil lives as well.

We Will Disarm after Iran Disarms

We are flooded with information on the great threat Iran poses and on the necessity of military operations.  The debate within the Israeli public discourse is almost devoid of the possibility of solution through diplomatic means.  In contrast to the firm stand of the former US president George Bush and senior officials in Israeli politics that the Iranian threat poses an immediate and concrete threat, there is the American intelligence assessment, which was published on December 3rd 2007.  This report was intended to convince the superpowers in the UN to agree on a third series of sanctions on Iran in order to halt the enrichment of uranium.  However, the assessment concluded that Iran did halt its activity for nuclear armament already in 2003, and that these activities have not been renewed since then.

The US intelligence assessment contradicts the former US president George Bush’s proclamations regarding the critical and immediate danger Iran poses.  The assessment is a result of a joint estimate of 16 American spy agencies, which concluded that it is not known whether Iran intends to develop nuclear weapons.

In the Middle East, Israel alone poses an immediate threat to its neighbors, and mainly to itself, its own citizens and residents.  The question is whether a country that, according to foreign sources, possesses nuclear weapons has the right to demand from other countries not to develop them.  This is an example of a double standard, combined with the ambition of Israel for military and economic superiority in the Middle East.  This ambition serves powers such as the US, Britain and France, which want to maintain the existing power relations and control the kind of weapons that constitute a political and economic sword.

How Close Is It to Me?

The map below is taken from Greenpeace International 51 and shows the locations of nuclear facilities according to Greenpeace.

Where do you live? 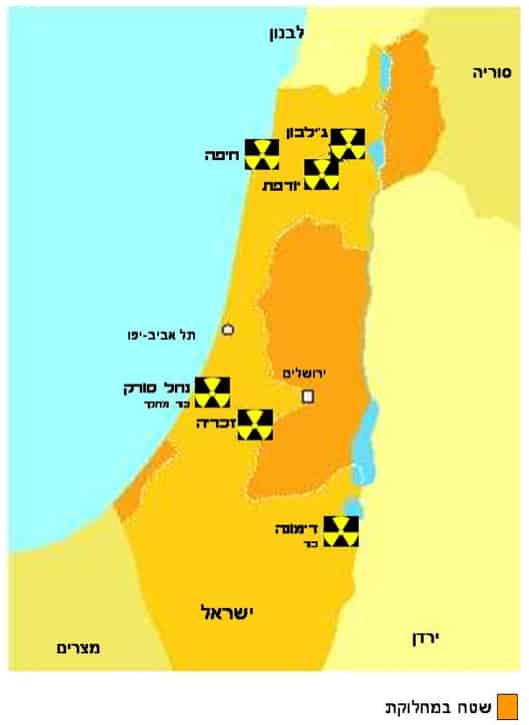 In addition to strategic and tactical issues, a vision of peace should also include issues of social, economic and environmental justice.  Comprehensive regional peace cannot be discussed without an open discussion of Israel’s nuclear weapons.  The first step should be on the internal level; that is, a profound and bold public civil debate.  It is our right to know.  A nuclear holocaust poses a threat to all of us — Israel and the entire world.  The finger that will press the button, whomever it belongs to, may in a single moment turn everything we know and love — our children, families, the earth and the sky, cities and villages — to ashes.  The nuclear bomb embodies evil, a destroying power, human destruction, and the absolute elimination of freedom.

It is our duty to be involved and express our position on what is being done in our name and for our sake.