Falling energy prices pushed down the consumer price index 0.1 percent in the month of April.  After rising 2.7 percent from January of 2009 to January of 2010, consumer prices were unchanged over the first three months of this year.  Core prices were unchanged in April.  Inflation in the core index has risen at a 0.6 percent annual rate over the last three months and 0.3 percent over the last six. 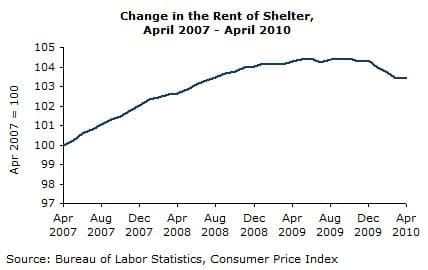 Falling rents also continue to hold down core inflation.  Rent of primary residence was essentially unchanged in April and, despite a 0.1 percent increase in March, has remained flat over the last six months.  Owners’ equivalent rent (OER) of primary residences — which accounts for nearly four times as much of the CPI — fell less than 0.1 percent in April.  This was the sixth consecutive month of small decline in OER, and over that time it has fallen at a 0.7 percent annualized rate.

Falling energy prices helped push down transportation prices, which fell 0.5 percent in April.  Transportation prices have fallen at a 2.8 percent annualized rate over the last three months, after rising at a 14.2 percent rate over the previous three.  The previously-reported disinflation in the used-car market continued in April as prices rose only 0.2 percent in the month.  The cash-for-clunkers program drove the three-month rate of inflation in the price of used cars to an annualized rate of over 30 percent for the quarter ending in October, but has declined steadily since then.  Used car prices have risen at a 5.6 percent rate since January.

Apparel prices fell again in April.  Though apparel accounts for less than 4 percent of the overall CPI, prices have fallen at a 7.0 percent annualized rate over the last three months and 3.4 percent over the last six.

Elsewhere in the core index, medical care continues to be a source of price pressure — rising 0.2 percent in the month.  Among medical care costs, hospital and related services were again the fastest growing in April, though not as fast as the previous two months.  The price of hospital services rose 0.4 percent in the month — a 4.3 percent annualized rate of growth.  By contrast, those prices rose 1.1 and 1.0 percent in February and March, respectively.

Non-agricultural export prices rose 1.4 percent in April, and have risen 6.0 percent over the last year.  At the same time, nonfuel import prices rose 0.5 percent.  The rise in both import and export prices has been concentrated in industrial supplies rather than consumer or capital goods.  The producer price indices largely tell the same story, as the price of core finished goods have risen at a 1.4 percent annualized rate over the last three months.

Overall, the inflation picture is not much changed since last month.  The pressures at earlier stages of production are confined to supplies and materials, which have experienced large price booms and busts over the last few years, but producers have largely not passed these price changes on to consumers.  As a result, deflation is present in much of the core index and energy prices have begun to fall once again — leaving little threat of inflation.

David Rosnick is an economist at the Center for Economic and Policy Research in Washington, DC.  This article was published by CEPR under a Creative Commons license on 19 May 2010.