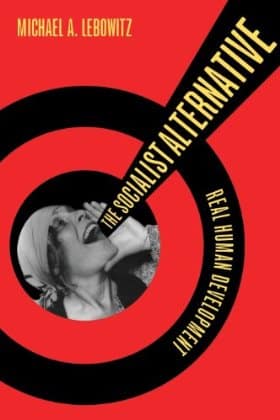 Only about ten or fifteen years ago, leftist theory was in a sorry state.  It seemed as if socialism had ceased to be a viable project with the fall of the Soviet Union.  Instead of an alternative to capitalism, theorists were singing the praises of the third way or the idea of changing the world without taking power.  Today, however, capitalism is facing its worst crisis in decades and socialism is hailed from Venezuela to Nepal.  At this new conjuncture, Michael Lebowtiz’s Socialist Alternative helps to provide a theoretical way for twenty-first century socialism.

First, a few words about the author.  Michael Lebowitz is a long-time activist.  In the 1960s, he was active in Students for a Democratic Society.  In the 1970s, he served as an economic policy chair for the New Democratic Party in Canada.  Currently, Lebowitz is working in Venezuela at the Centro Internacional Miranda.  Lebowitz has authored a number of books on Marxist theory such as Beyond Capital: Marx’s Political Economy of the Working Class (Winner of the Isaac Deutscher Memorial Prize in 2004), Build It Now, and Following Marx.  All of Lebowitz’s works are inspired by a solid grounding in Marx’s method and a deep revolutionary vision.

In this sense, Socialist Alternative is no different.  Yet the timing could not be better: a work that reaffirms the socialist vision in the midst of the Great Recession.  That is what Lebowitz sets out to do.  His work “draws upon the Venezuelan experiment to develop a general vision of socialism and concrete directions for struggle” (9).  Lebowitz begins by asking a question: “What is a good society?” (12).  Lebowitz believes that “a good society is one that permits the full development of human potential” (12).

As Lebowitz puts it, “the logic of capital generates a society in which all human values are subordinated to the pursuit of profits” (16).  The logic of capital entails the exploitation of workers.  Capital alienates workers from the products of their labor, crushes them with the speed-up and extended workday, and deforms the human being.  Capitalism also brings with it a hierarchical division of labor, self-interest, and unemployment.  Lebowitz points out that capitalism is an organic system that continually reproduces itself.

Lebowitz’s analysis of capitalism is important to his development of a socialist alternative.  Just as capitalism is an organic system with its own relations and mode of production, socialism must also be an organic system.  That requires revolutionary practice where, in order “to change a structure in which all relations coexist simultaneously and support one another, you have to do more than change a few elements in that structure; you must stress at all times the hub of these relations — human beings as subjects and products of their own activity” (129).  For Lebowitz, this means that the key to any potential socialist transformation is the self-activity of the masses.

Here is a clear strength of Lebowitz’s book: it is not a rehash of Soviet-style “socialism” or social democracy.  Lebowitz criticizes the USSR for its alienated and undemocratic society that was ruled from the top down.  Lebowitz also believes social democracy is not willing to take the measures necessary to confront capital.  Neither of these systems can serve as an alternative to capitalism.  (For those on the left not affiliated to either social democracy or the USSR, this is old news.)  That brings us to the following question: if capitalism does not produce a good society that ensures human development, what type of alternative can?

Lebowitz answers this by laying out the socialist triangle.  The socialist triangle consists of three necessary parts: social ownership of the means of production, social production organized by workers, and the satisfaction of communal needs.  It would be useful to look at each side of the triangle to elaborate what all this means.

The first part of the triangle is the social ownership of the means of production.  Social ownership “implies a profound democracy from below rather than decisions by a state that stands over and above society” (41).  This means that factories are run by the workers, not bosses or bureaucrats.  Lebowitz does a good job here in differentiating state ownership (with its hierarchical and undemocratic relations) from the democratic control of the workers.  Social ownership is necessary to satisfy the needs of all people, rather than just the needs of private owners.

The third part of the triangle is the satisfaction of communal needs.  With communal production “where the associated producers engage in productive activity for the needs of the community, there is the continuous process of development of the capabilities of producers” (81).  Lebowitz contrasts communal needs to individual needs.  Where self-interest or material incentives are the driving force, this reproduces the defects of capitalism.  As Lebowitz makes abundantly clear, socialism can’t be built with the tools of capitalism.

Thus, the socialist triangle is an organic system that seeks to overcome the defects of capitalism.  For example, without the goal of producing for communal needs, an attempt at socialism can lead back to capitalism.  Lebowitz clarifies this point by using the example of Yugoslav factories.  There, workers had some control over their factories (although there was also a large managerial layer), but the factories “were driven by one thing — self-interest” (74).  In running factories for self-interest, the Yugoslav experiment led back to a capitalist system.  Thus, without all the parts of the triangle in place, socialism cannot function as an organic system.

Lebowitz goes into how to make the socialist triangle an organic system.  He discusses the role of workers’ councils, connections between producers in different communities, and expansion of the commons.  However, Lebowitz doesn’t offer a blueprint for the future.  Rather, he emphasizes “that each country must invent its own path” (128).  Although clearly inspired by the Venezuelan Revolution, Lebowitz doesn’t believe it has found the golden road to socialism.

For those unfamiliar with the Marxist vocabulary and method, this book will not be easy.  Yet this book is necessary.  Those who dare to read will find a bold vision of a profoundly humanistic socialism.  Those looking for answers to the miseries produced by the financial crash and imperialist war should start with The Socialist Alternative.

Doug Greene is a Marxist historian and part-time teacher living in Massachusetts.  He can be reached at <greene.douglas@ymail.com>.