The Case-Shiller 20-City index rose by 1.1 percent in May, its second consecutive increase.  Prices rose in 19 of the 20 cities, with Las Vegas being the only city with a price decline.

Minneapolis had the sharpest jump in prices, with prices rising 2.8 percent in May.  This is the second consecutive monthly increase after 7 straight months of decline.  Atlanta followed the same pattern.  Its 2 percent price increase for May followed a rise in April and 7 consecutive months of falling prices.

The May jump in prices is consistent with a pattern of home buying that was obviously driven by the tax credit.  Pending contracts surged in April and plummeted in May, as did new home sales, which also reflect signed contracts.  The push to buy homes before the expiration of the tax credit predictably pushed house prices upward.  The sales in May reflect contracts signed in March and April before the expiration of the tax credit.  The June data will be the first to include a substantial number of homes contracted after the end of the tax credit.  However, even this number is likely to still reflect some price pressure from the California state credit, a credit separate and in addition to the federal tax credit for homebuyers.  The California credit will likely support sales in the state into July.

All of the data available since the end of the tax credit suggest that another sharp fall in prices is imminent.  Originally, reported May new home sales were at a record low.  They were revised even lower with the June report.  The June sales data also would have been viewed as a disaster, except for the comparison with the May numbers.

Since the existing home data reflect actual sales, they will not begin to reflect the post-credit weakness until the July data are reported.  However, there is already a notable rise in inventories of unsold homes, with the June level just under 4 million.  With the rate of sales likely to fall sharply, the backlog of unsold homes will likely exceed 10 months of sales at the July selling rate.  This will put substantial downward pressure on prices.  The record housing vacancy data reported for the second quarter also supports the view of a housing market with considerable downward pressure on prices. 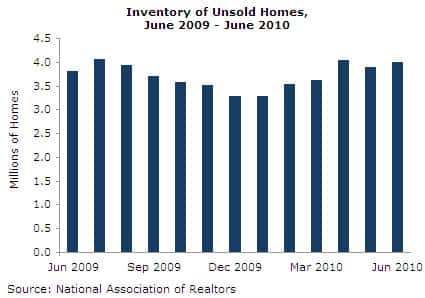 This report is likely to lead many analysts to claim that prices are moving upward and that the housing market has stabilized.  This will lead them to be surprised when data in the second half of 2010 shows sharp price declines.

Dean Baker is the co-director of the Center for Economic and Policy Research (CEPR).  He is the author of False Profits: Recovering from the Bubble Economy.  He also has a blog Beat the Press, where he discusses the media’s coverage of economic issues.  This article was first published by CEPR on 27 July 2010 under a Creative Commons license.