The new report is also markedly more pessimistic in its near-term wage growth assumptions.  The 2009 report assumed a real wage differential of 1.8 percent in 2009, 2010, and 2011.  (The real wage differential is a calculation for average annual wages, so it has both an hours and wage component.)  The new report revised downward the previously reported decline of 1.0 percent in 2008 to a sharper 2.1 percent fall in real wages.  It shows real wages unchanged for 2009, but starting to catch up with a 3.1 percent rise in 2010, a 2.2 percent increase in 2011, and a 2.4 percent rise in 2012. 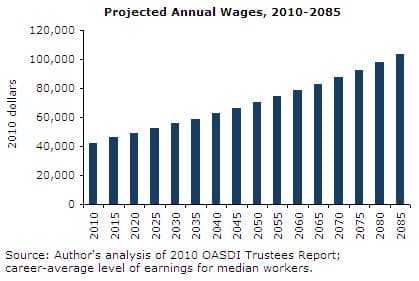 The more pessimistic near-term picture in the 2010 report is offset by a considerably more optimistic long-term picture.  The 2009 report assumed that the earnings share of labor compensation would fall by an average of 0.2 percentage points a year, continuing a long pattern attributable to the growing share of employer-provided health insurance in total compensation.  The new report assumes that health care reform will reverse this trend.  The earnings share of compensation is projected to actually increase by 0.1 percentage points annually over the long run.

The impact of the new assumption on employer-provided health insurance is large, relative to the impact of prospective policy changes.  For example, a 3 percentage-point rise in the payroll tax, which would be a substantial increase, would have only half as much impact on after-tax wages as the gains due to the new health care cost assumption.  In short, the 2010 report implies a considerably higher standard of living for future workers than the 2009 report.

Another interesting aspect of the 2010 report is that it shows that in the current year and in 2011, outlays will exceed tax revenue, due to the economic downturn.  This is noteworthy precisely because it has no impact whatsoever on the health of the program.  Those urging cuts in the program had often highlighted the year when benefits were first projected to exceed tax revenue (2016 in the last report).  Now that this has already occurred and nothing has happened, the public may be less concerned about this prospect.  Since the trust fund has built up a surplus of more than $2.5 trillion over the last quarter century, a gap between annual tax revenue and benefit payments has no impact on the program.  The trust fund is still growing by more than $120 billion a year due to interest payments on its bonds.

If policy on Social Security reflected evidence and projections, the 2010 report would be a substantial setback for those proposing near-term cuts to the program.  It shows that the situation of current workers and near-retirees is considerably worse than indicated in the last report, reflecting the impact of the recession.  The recession has also destroyed much of the retirement savings and home equity of older workers.  At the same time, the situation of workers two or three decades in the future looks considerably brighter, suggesting they would have little problem with a somewhat higher tax burden, if that proved necessary to sustain scheduled benefits.

Dean Baker is the co-director of the Center for Economic and Policy Research (CEPR).  He is the author of False Profits: Recovering from the Bubble Economy.  He also has a blog Beat the Press, where he discusses the media’s coverage of economic issues.  This article was first published by CEPR on 5 August 2010 under a Creative Commons license.