Even before the turmoil caused by the global financial crisis has been adequately dealt with in terms of the adverse effects on employment and living conditions, governments across the world are being told that fiscal consolidation is the most important macroeconomic policy to be addressed.  The calamities resulting from sovereign debt crises are widely advertised by the example of Greece, which in turn is encouraging many developing countries to opt for measures of austerity and fiscal retrenchment in an effort to placate markets.

The danger is not only that such policies may be put in place prematurely, thereby threatening the currently fragile global recovery.  There are several additional dangers.  Such a strategy depends upon exports to provide the source of dynamism for the domestic economy, which obviously cannot work if all countries or even a large number of them try it at the same time.  It also accentuates and worsens domestic economic inequalities, which can give rise to social tensions and political instability that also affect the economy.  In extreme cases, it can generate a self-reinforcing economic free fall, in which market bearishness is compounded by government austerity.

Fortunately, this is not the only option available, nor is it the only actual experience that can be drawn upon to provide examples.  In fact, even the very recent experience of several countries suggests that heterodox measures based on different kinds of state intervention can be more successful in allowing countries to deal with and escape the worst consequences of global volatility.  This is illustrated by the contrasting experiences of Hungary (which opted for the standard model of adjustment) and Uzbekistan (which undertook a rather different and more creative pattern of adjustment based on active state involvement).

Hungary was seen in the early part of the past decade as a star performer among the transition economies of Eastern and Central Europe, lauded by international organisations, financial media and markets for its far-reaching market-oriented reforms that began in the 1990s.  The country joined the OECD in 1995, the WTO in 1996 and the European Union in 2004.  Hungary’s history of export orientation, highly educated workforce and strategic geographical position made it an attractive destination especially for mobile European capital.

Economic growth since 1995 was associated with sweeping economic measures, beginning with devaluation of the Hungarian forint to encourage exports, and followed by an extensive privatisation programme, in which most important public assets were sold, often to foreign buyers; restrictions on public sector wages and new employment; reduction or removal of state subsidies on higher education and medical treatment (including on drugs and dental care); welfare cuts including reduced family allowances, maternity benefits and child care payments.

The generous tax cuts and other implicit subsidies (for example on energy costs) offered to foreign investors were associated with a substantial inflow of export-oriented FDI, particularly in the automobile sector, which generated a process of export-led growth.  Tourism also became a major source of foreign exchange, income and employment.  Despite these, the current account remained significantly in deficit (at around 6 to 8 per cent of GDP), financed by a combination of direct investment and borrowing.

This growth trajectory was dramatically affected by the global crisis in 2007-2008, since it was associated with a sharp decline in exports and tourism receipts as well as a reversal of capital flows.  The period of growth had also been associated with growing public and private indebtedness, which became more difficult to service after currency devaluation.  The drying up of private capital markets led to severe liquidity problems.

In November 2008, Hungary signed a Stand-By Arrangement with the IMF for SDR 10.5 billion, as part of a joint rescue package worked out with the European Union.  Various IMF reviews found that Hungary complied with all the very severely pro-cyclical conditions imposed, including a massive reduction of the fiscal deficit from more than 9 per cent of GDP in the last quarter of 2008 to around 3.8 per cent thereafter.  At least partly as a result of this, real GDP declined by 6.2 per cent in 2009.  In fact, Hungary did not actually take the remaining amount of around under the SBA 725 million. 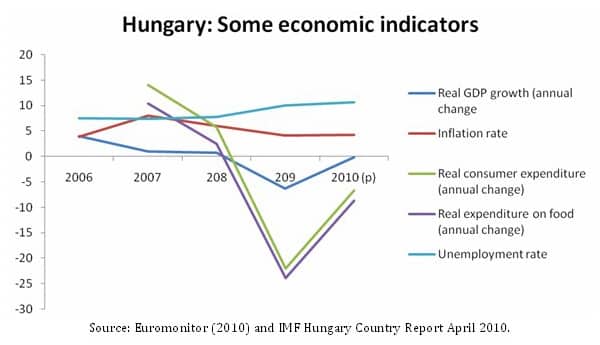 The very harsh economic conditions led to social and political turmoil, with even policemen going on strike demanding their pay and arrears.  The Social Democratic Party implementing these measures was thoroughly defeated in the elections, which delivered a resounding majority to the centre-right Fidesz Party that had campaigned on a promise of less austerity.  However, once in power, in June this year the new government also announced that the fiscal situation was worse than they expected, and so even more severe fiscal measures would be required.

There were tax cuts for the wealthy, which were explicitly designed to encourage more private investment and spending, but more pain for workers and users of public services.  Public sector wages are to be cut once again (in nominal terms in an inflationary environment) by around 15 per cent; redundancy payments are to be limited to two months’ pay, with all other payments subject to a 98 per cent tax; pensions are to be further cut along with an increase in the retirement age.  Coming after nearly five years of similar austerity measures, these policies are likely not only to add to material distress, but obviously prevent or delay any recovery in the economy.

It could be thought that all this would be enough even for the IMF to be satisfied, but apparently not!  In mid-July, the visiting IMF team actually broke off discussions with the government and returned home, unhappy that more was not being done on the expenditure side to reduce the fiscal deficit, so as to ensure the planned 3.8 per cent of GDP for this year.  The IMF demanded privatization of state-owned enterprises and further reductions in spending.

Given the IMF focus on fiscal consolidation, it is surprising to note that the team objected to a proposal of the Hungarian government that would actually help to reduce the deficit — a proposed tax on the banking sector that is expected to raise nearly $1 billion.  The IMF found this to be ”high” and likely to ”adversely affect lending and growth”.

So it seems that not all deficit-reduction measures are apparently to the taste of the IMF!  Anything that affects bankers and other forms of capital is obviously unacceptable, and the belt-tightening should focus on the public at large, especially workers.  But this time, even the centre-right party realises that it really cannot afford to risk renewed public anger at even more such measures, at least until the municipal elections to be held in October.

So whose interests are being served by such demands by the IMF?  While the pro-cyclical proclivities of the IMF are well known, it could be thought that that given the recent past and its own statements, it would at least be slightly shamefaced about insisting upon them.  But it may be that it is being pushed further along this road by the EU, which has become increasingly insistent on a combined push towards austerity among all wayward European economies.

The likely devastation on the real economies of Europe is obvious to almost all observers, so such a policy appears inexplicable.  The purpose right now, however, is to somehow save the banking system, which is deeply implicated in the more fragile economies.  Thus, banks from just five countries (Austria, Germany, Italy, Belgium and France) hold more than $126 billion of Hungarian public debt.  This entire exercise is essentially to save them from any diminution in the value of their assets.  Already since the breakdown of IMF talks, the Hungarian forint has slumped to its lowest level in the past two years, and yields on bonds have risen, even though no ”fundamentals” have changed.

Uzbekistan: A Case of Heterodox Response to Crisis

Unlike many other transition economies, Uzbekistan sought to move to a more market-based economic system with a gradualist and heterodox approach.  Despite criticism from the IMF and other lending agencies, it adopted an import-substituting industrialization strategy in order to diversify out of heavy dependence on cotton exports and to utilize its domestic oil and gas reserves as well as gold and other mineral resources.  It moved from importing 60 per cent of its oil production during the Soviet period to self-sufficiency in oil by 1995, without any reliance on foreign direct investment.

In the mid-1990s the country moved closer to adopting IMF-supported liberalization policies.  But the collapse of world cotton prices in 1996 followed by the devaluation of the Russian rouble in 1998 precipitated a crisis, which was exacerbated by the suspension of the IMF Stand-By Agreement and the withdrawal of World Bank funds.  Uzbekistan chose to intensify its import substitution and targeted credit policies, as well as to adopt a ”crawling peg” system of exchange rate management to avoid sharp exchange rate shocks.  It was rewarded with stable and then accelerating GDP growth over the past decade, based on rapidly increasing capital investment.  GDP growth averaged 4 per cent annually in the early part of the decade and increased to 8-9 per cent before the global crisis (see chart). 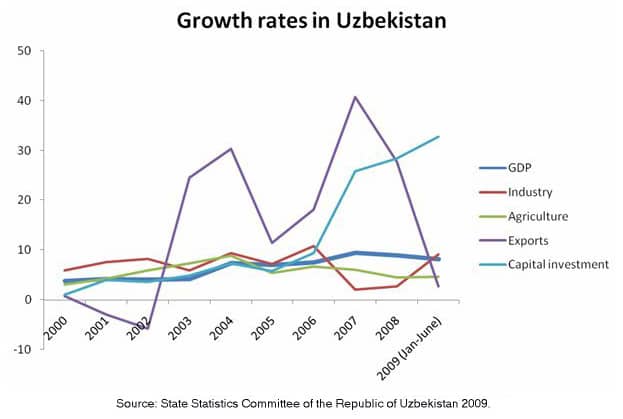 This meant that the economy could face the global crises (the rising volatility of food and fuel prices followed by the financial crisis) in a relatively strong position.  In any case, there was hardly any financial contagion since there had been only very limited financial liberalization.  More importantly, it was able to cope with the fall in exports through countercyclical macroeconomic policies.  The Uzbekistan government’s ability to mobilize domestic revenues (which continue to account for 30 per cent of GDP) allowed it to keep its budget broadly in balance through most of the 2000s.  It also has recently started to channel its current account surpluses into a new Fund for Reconstruction and Development.

These gave it ample fiscal and balance of payments space from which to initiate a large fiscal stimulus in the wake of the crisis, which was equivalent to around 5 per cent of GDP in 2009.  Capital investment has increased very rapidly, counterbalancing the effects of export decline.  Contrary to the pessimistic projections of the IMF, industrial growth accelerated from 2.7 per cent in 2008 to 9.1 per cent in the first half of 2009.

It is true that the pattern of growth in Uzbekistan has not been associated with sufficiently rapid employment generation or poverty reduction (McKinley and Weeks 2009).  Nevertheless, its heterodox measures have meant that the economy could avoid the worst effects of the crisis and continue to grow, belying expectations of a sharp fall in GDP.

As a result, even those who were earlier critical of such policies have changed their minds.  A mission of Executive Directors of the IMF who visited Uzbekistan in October 2009 noted that “Uzbekistan has remained mostly resilient to the global economic crisis as a result of the authorities’ prudent policies that enabled them to accumulate considerable resources to support growth in this period and withstand the impact of the crisis and due to its cautious approach to participation in global financial markets” (IMF Press Release No 09/344).